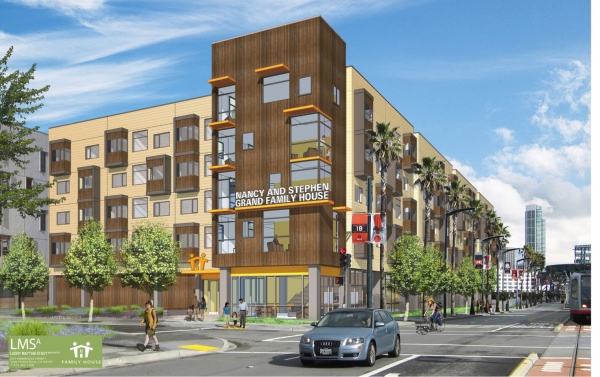 For three decades, Family House has offered a supportive home base for families whose children are being treated for cancer and other life-threatening illnesses at UCSF Benioff Children’s Hospital.

Now, as the children’s hospital prepares for its move to a new home at Mission Bay, Family House also is gearing up to relocate to a new facility down the street from the new hospital – one that will more than double its occupancy and offer a long list of special amenities. 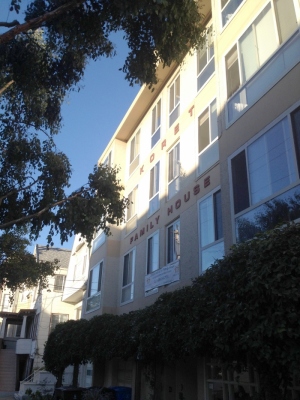 The current Family House facility near the Parnassus campus

has a maximum occupancy of 107 guests. The planned new

facility at Mission Bay will more than double the occupancy.

“We are ecstatic Family House is expanding their capacity so that all families will have a place to stay while being treated at UCSF Benioff Children’s Hospital,” said Kimberly Scurr, the hospital’s executive director who also serves on Family House’s Advisory Board of Directors. “Although the hospital’s new facilities will have larger family space in the rooms, it cannot replace the homelike atmosphere that so many need during a time of crisis.”

The Nancy and Stephen Grand Family House at Mission Bay will open within a year following the February 1, 2015, grand opening of the new 289-bed UCSF Benioff Children’s Hospital. The 92,000-square-foot facility will include 80 bedrooms, each with an en suite bathroom, with a total occupancy of 250 people each night.

The San Francisco-based nonprofit currently offers free, temporary housing for more than 2,000 families each year, operating out of two apartment-style buildings located near the UCSF Parnassus campus. The two buildings combined offer 34 bedrooms and 12 bathrooms, with a maximum occupancy of 107 guests.

“Our goal is to maintain the homelike atmosphere of our existing facilities while expanding capacity so we never have to say ‘no’ to any family needing our services,” said Alexandra Morgan, executive director of Family House. “It’s not about the interior color palette of the new space, but it has everything to do with having a generous spirit and a sense of caring for others who have to walk a difficult path.”

A Comforting Place in Time of Crisis

Santa Cruz resident and father Rob Stuart learned the value of Family House firsthand when his son Jordan was diagnosed with a brain tumor in 1991.

With two other preschool-aged children, Stuart knew it would be impossible to constantly travel back and forth between Santa Cruz and San Francisco. 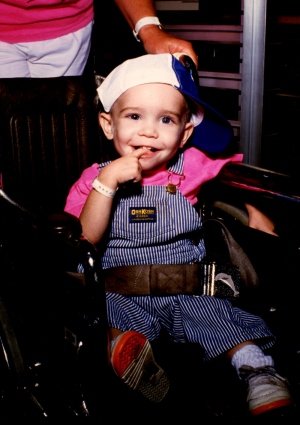 while he underwent brain cancer treatment in 1991. Although

Jordan ultimately lost his battle with cancer, his father Rob

Stuart has remained active with Family House, saying it "gave

us a sense of normalcy, love and human connection in the

After being introduced to Family House through a UCSF social worker, he and his family ended up living there for most of the next 13 months while Jordan underwent multiple surgeries, chemotherapy and radiation. Just as many other families have done over the years, the Stuarts celebrated birthdays and Christmas at Family House during their stay.

Although Jordan lost his battle to brain cancer in May 1992, Stuart has remained actively involved with Family House over the last 20 years and established a foundation in his son’s name to help raise funds for the organization that provided so much love and support during his family’s time of crisis.

“I can’t tell you how much it meant to us to have a comforting place right next to the hospital. It’s hard enough to deal with the shock of your young child being diagnosed with cancer without adding the challenge of where you’re going to stay,” Stuart said.

“Family House was like an oasis in a desert for my family,” he added. “It gave us a sense of normalcy, love and human connection in the midst of a very chaotic time.”

The new Mission Bay Family House has been specifically designed to meet those innately human needs of its residents. It will offer a number of areas for parents and kids to go for rest, relaxation and recuperation, including spaces designated for crafting, cooking and story time.

“Most importantly, after food and shelter, what a family in crisis needs is the elegantly simple support that individuals can give to one another,” Morgan said. “Knowing this, we do all we can to provide spaces for that informal support to happen and for friendships to blossom.”

Additional amenities will include ample office space, an exercise room, a teen room and mediation areas. A massive enclosed garden will provide a natural respite where families can take in the fresh air and Mission Bay sunshine.

The Ronald McDonald House of San Francisco is another welcoming option for families of critically ill or injured children who need shorter-term accommodations. Like Family House, Ronald McDonald House is planning an expansion to Mission Bay, where it will be located inside the new UCSF Benioff Children's Hospital and come equipped with rooms, showers, a kitchen and a family room.

The new Family House at Mission Bay will be named in honor of donors Nancy and Stephen Grand, who pledged a $10 million gift to the organization last year.

The Grands became interested in Family House after Stephen Grand was hospitalized for cancer treatment at UCSF eight years ago. His wife recalls seeing families “camped out” in the hospital lounges and realized how difficult it is for most people to take time off from work and pay for temporary housing during a health crisis.

The Future is at Mission Bay

Family House has set a fund- raising goal of $40 million to build its new facility at Mission Bay, which will double its current occupancy and provide more amenities to families whose children are being treated for life-threatening illnesses at UCSF Benioff Children's Hospital.

Click here to learn more about making a donation.

“We know that you cannot go through a cancer fight by yourself. You need your family with you, and with little children, the need for family is even more essential,” said Nancy Grand, who also serves on the Family House Board of Directors. “We said to ourselves that if there was a way to help, we would, and so when we learned more about Family House, we knew we had to be onboard.”

The Grands’ naming gift helped bring the funds raised for the new facility to the $25 million mark, with a goal of $40 million.

Construction will begin this summer and is expected to last eight to 10 months. In the meantime, the current facilities will continue to operate and will shuttle families over to Mission Bay once the new hospital opens.

The protocol for referrals likely will remain the same: UCSF's pediatric social workers will send qualifying families who live more than 50 miles from the hospital to Family House, where they'll be welcomed by an expanded hospitality and concierge staff.

“What happens here is incredibly beautiful. It’s humane,” Morgan said. “I’ve never done anything as rewarding or as compelling as working at Family House, and the greatest motivation for me right now is to never have to turn away another family who needs our services.