Alzheimer’s disease is one of the greatest challenges facing modern medicine, but there is new hope in the fight against this deadly disease. Today, renowned Alzheimer’s researcher and founding president of the Gladstone Institutes, Robert Mahley, MD, PhD, has received a Seeding Drug Discovery Award from the Wellcome Trust. 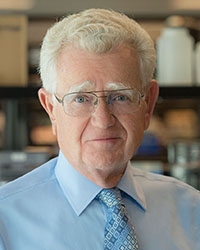 Mahley, along with Gladstone investigator Yadong Huang, MD, PhD, will use the funding to identify new chemical compounds that can target apolipoprotein E4 (apoE4)—the strongest genetic risk factor for developing Alzheimer’s. Specifically, the funding will enable Gladstone researchers to collaborate with Numerate, a South San Francisco-based chemoinformatics company, to develop small-molecule therapies that prevent the damaging effects of apoE4 on the brain.

“We are truly honored and humbled to be recognized by the Wellcome Trust,” said Mahley, who is also a professor of medicine at UC San Francisco, with which Gladstone is affiliated. “Decades of research have identified the strong connection between apoE4 and Alzheimer’s. Now, with support from the Trust and with our industry partner Numerate, we can move forward with finding ways to neutralize this toxic protein, thus halting the disease’s devastating effects.”

ApoE4 is a type, or variant, of the apoE protein. Normally, apoE is involved in repairing nerve cells that have been injured, for example, by a concussion. But apoE comes in several forms: the apoE3 variant of apoE repairs cells as it should, but the apoE4 variant does not. Nerve cells, considering apoE4 an intruder, attack it with a special enzyme called a protease. This molecule cuts the protein into smaller fragments, which float aimlessly around in the cell and wreak havoc on many vital cell structures.

Gladstone scientists have been studying apoE for more than three decades. As a result, they now know the exact genetic code responsible for making apoE and how the different forms of apoE arise. They can also track, step-by-step, the destruction that apoE4 causes inside neurons. And considerable evidence suggests that apoE4 actually causes Alzheimer’s, rather than simply being linked to it.

Roughly 65–80% of all Alzheimer’s patients have at least one copy of the gene that encodes the apoE4 protein. In addition, traumatic brain injury and stroke survivors with apoE4 have consistently poorer clinical outcomes than those without it and are significantly more likely to develop neurological disease. Further, research has shown apoE4 to be associated with the progression of multiple sclerosis, various forms of dementia and—in some cases—Parkinson’s disease. Mahley and his research team have been working towards finding a way to mitigate the harmful effects of apoE4 by developing something called a structure corrector.

The difference between apoE3 and apoE4 involves a minute change in the protein’s amino acid sequence that has a profound effect on its three-dimensional structure and function. Drugs that can repair this defect, making the harmful apoE4 indistinguishable from the good apoE3, could prevent the cascade of cellular mayhem before it even begins. Mahley and Huang, who is also an associate professor of neurology at UCSF, have already identified molecules that correct apoE4’s structure. In partnership with Numerate, the Wellcome Trust funds will allow them to pursue the development of these molecules into potentially life-saving drugs.

Numerate will utilize its proprietary in silico drug design platform, along with its track record of solving the problem of multiple, often competing, objectives of safe and effective drug design. Research efforts will focus on developing the so-called structure corrector, fixing apoE4’s structural defect so that it more closely resembles apoE3 and can function normally. The end goal of this structure corrector would be to prevent apoE4’s damaging effects—before it is too late.

The Seeding Drug Discovery Initiative was established by the Wellcome Trust to help researchers move early-stage drug discoveries further along the pipeline and, ultimately, towards clinical trials.

“Whilst the number of people affected by Alzheimer's is expected to double within the next 15 years, the number of new drugs in development is low,” said Richard Seabrook, PhD, Head of Business Development at the Wellcome Trust. “We are pleased to support the pioneering research of the Gladstone Institutes and Numerate in the quest for a drug that will correct the structure of apoE4 that could then move forward into much-needed clinical studies.”

About the Wellcome Trust

The Wellcome Trust is a global charitable foundation dedicated to achieving extraordinary improvements in human and animal health. It supports the brightest minds in biomedical research and the medical humanities. The Trust’s breadth of support includes public engagement, education and the application of research to improve health. It is independent of both political and commercial interests.