Lisa Cisneros and Louise Chu, both communication professionals in the University Relations department, have been promoted to new roles at UC San Francisco. 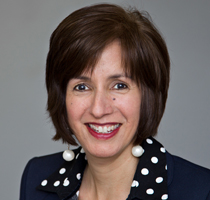 Chu, who came to UCSF last July as an associate editor, will now be responsible for the editorial content and production of UCSF.edu, focusing on externally facing news and incorporating more visual story telling through multimedia, infographics, social media, etc.

Before joining UCSF in 2012, Chu spent 10 years as a journalist for The Associated Press, most recently as a breaking news editor for Northern California. She's also worked as a state government reporter in Sacramento and a religion and minority affairs reporter in Atlanta. She holds a BA degree in Mass Communication Studies from UCLA.

Since 1994, Cisneros has served in a variety of communications roles at UCSF, including assistant director of internal communications and most recently as Editor-in-Chief. Before coming to UCSF, she worked as a newspaper journalist, covering education, health care and general news. She holds a BA degree from San Francisco State University in Broadcast Journalism and a minor degree in Print Journalism.