What does it mean to be human? According to scientists the key lies, ultimately, in the billions of lines of genetic code that comprise the human genome.

The problem, however, has been deciphering that code. But now, researchers at the Gladstone Institutes have discovered how the activation of specific stretches of DNA control the development of uniquely human characteristics – and tell an intriguing story about the evolution of our species. 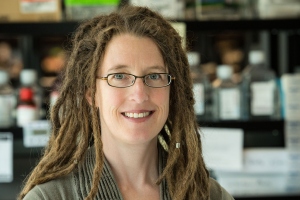 In the latest issue of Philosophical Transactions of the Royal Society B, researchers in the laboratory of Gladstone investigator Katherine Pollard, PhD, use the latest sequencing and bioinformatics tools to find genomic regions that guide the development of human-specific characteristics. These results offer new clues as to how the activation of similar stretches of DNA – shared between two species – can sometimes result in vastly different outcomes.

“Advances in DNA sequencing and supercomputing have given us the power to understand evolution at a level of detail that just a few years ago would have been impossible,” said Pollard, who is also a professor of epidemiology and biostatistics at UC San Francisco's Institute for Human Genetics. Gladstone is affiliated with UCSF.

“In this study, we found stretches of DNA that evolved much more quickly than others," she said. "We believe that these fast-evolving stretches were crucial to our human ancestors becoming distinct from our closest primate relatives.”

These stretches are called human accelerated regions, or HARs, so-called because they mutate at a relatively fast rate. In addition, the majority of HARs don’t appear to encode specific genes. The research team hypothesized that HARs instead acted as “enhancers,” controlling when and for how long certain genes were switched on during embryonic development.

Through experiments in embryonic animal models, combined with powerful computational genomics analyses, the research team identified more than 2,600 HARs. Then, they created a program called EnhancerFinder to whittle down that list to just the HARs were likely to be enhancers.

“Using this approach, we predicted that nearly 800 HARs act as enhancers at a specific point during embryonic development," he said. "Confirming this prediction for several dozen HARs, our next goal was to see whether any of these HARs enhanced patterns of gene activation that were uniquely human.”

Additional analyses revealed five such HARs, which were active in both human and chimpanzee genomes, but which activated genes in different embryonic regions. For example, the human versions of HARs 2xHAR.164 and 2xHAR.170 are active in a region of the brain between the midbrain and hindbrain, while the chimp versions are not. This so-called “gain of function” of these two HARs in human embryos may point to differences in the development of key brain regions such as the cerebellum, which is known to regulate not only motor control but may also regulate higher cognitive functions, such as language, fear and pleasure.

“These results, while preliminary, offer an unprecedented glimpse into how very recent changes to the human genome have modified the genetic programs that control embryonic development to potentially yield different results,” said Capra. “We anticipate that if we were to look at the activity of HARs that are enhancers during later developmental stages, we would see even more differences between humans and chimpanzees.”

“It’s been 10 years since the Human Genome Project was declared ‘complete,’ but the amount of genomic knowledge we’ve gleaned since then – in large part due to advances in bioinformatics and supercomputing – have catapulted us far beyond what we thought we knew,” added Pollard. “I’m confident that as we continue to dive deep into important regions such as HARs, we’ll come ever closer to answering the question: what makes us human?’”

Capra completed this research during a postdoctoral fellowship Gladstone and is now an assistant professor at Vanderbilt University. UCSF graduate student Genevieve Erwin also participated in this research at Gladstone, which was supported by grants from the National Institute of General Medical Sciences (#GM082901) and the National Heart, Lung and Blood Institute (#HL098179), A PhRMA Foundation Fellowship, a University of California Achievement Awards for College Scientists (ARCS) Scholarship and a gift from the Sam Simeon Fund.