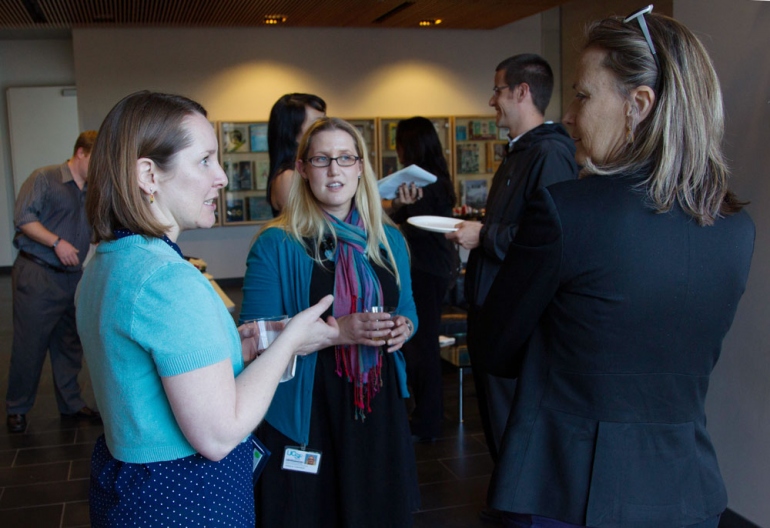 When UC San Francisco announced a game of ideas, many across the campus were intrigued by the call to help map the University’s future.

Individuals, teams and entire departments saw UCSF2025 as a chance to make their voices heard and secure a role in shaping the UCSF vision. It also managed to tap into some good ol’ competitive spirit.

“We’d never had the chancellor ask us to do something that we can actually do,” said Andrew Clark, acting director of strategic sourcing for Campus Procurement & Contracting. “So this was an opportunity.”

Clark and his Campus Procurement team are used to exercising that competitive spirit in their day-to-day negotiations with vendors, and they approached UCSF2025 no differently. They reached out to thousands in their personal and professional networks to help them generate ideas for the game, and pulled together a core team of 25 players.

“Winning for us was a seat at the table to design what the future looked like.  We’re an administrative unit buried way down here not related to the mission of the university, but we feel like we’ve got real good ideas,” said Greg Macway, a coordinator of procurement strategies who organized the team.

The game ultimately drew more than 2,000 players who engaged in a rapid-fire online dialogue over 36 hours in September on everything from campus life to research innovation. When the final results were logged, the winner came as a surprise to all: Ivayla Ivanova, known in the game as “Esther,” is a resident of Salt Lake City who didn’t have a direct affiliation with UCSF.

Ivanova learned about UCSF2025 in an e-newsletter sent to alumni of UCSF’s free online Coursera courses. Intellectually curious by nature, Ivanova – who recently graduated from the University of Utah with a master’s degree in real estate development – had thought it would be interesting to take the School of Dentistry’s online class, “Caries Management by Risk Assessment.”

UCSF2025 proved to be her next intellectual challenge.

“This game is very innovative and rather revolutionary in terms of the development of educational ideas and really facilitating a large-scale interaction focused entirely on the improvement of an institution in all aspects – education, transportation, health care, science, research – and looking at all these big ideas made me want to engage further and further,” Ivanova said.

Based on her real estate background, she tested some ideas around green buildings and sustainability, and the positive interactions she saw online got her hooked. She says she was particularly inspired by “how people were interacting across the different offices, and the very interdisciplinary nature of the ideas which came through.”

Ivanova’s dominance during the game didn’t go unnoticed. The competitive Campus Procurement squad eventually recruited her onto their team, and together they rose to the top.

Opportunities for Collaboration Across Campuses

Jim Hine, UCSF’s chief procurement officer, said the ultimate point was to generate the best ideas for the advancement of UCSF, no matter the person’s background. 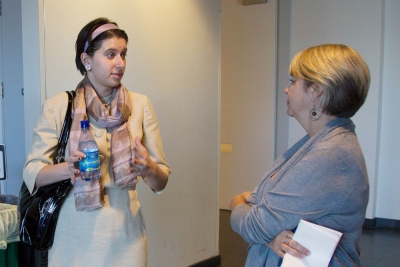 to UCSF by the Campus Procurement team. Photo by Susan Merrell 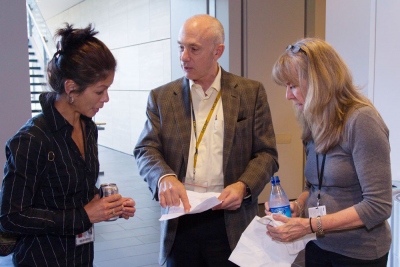 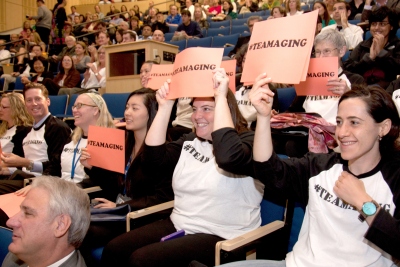 them a shout-out during her State of the University address on Sept. 24. Photo by

Already one idea that developed during UCSF2025 has moved offline: Hine recently had a meeting with stakeholders to pursue creating a UC-wide core for genomic sequencing, reducing University costs by sharing expensive sequencing equipment across the system rather than departments making their own purchases.

“We’ve already made new friends in areas who didn’t know who we were before this game,” he said.

UCSF geriatrician Louise Aronson, MD, had a similar strategy when organizing “Team Aging” for the game. Her goal was to push a thoughtful conversation about how UCSF can pioneer care for the aging population.

“Given our many strengths in education, science, clinical care, we should really be leading with this issue that’s costing a fortune, stressing health systems, but also showing huge potential in creating systems that are beneficial to patients,” Aronson said.

Pooling the energy and brainpower of 30 people in the Geriatrics Division in the schools of medicine and nursing, Team Aging had a strong second-place finish in the game, sparking ideas around establishing a UCSF institute, leveraging technology to help older adults and improving patient transitions.

For Monica Mapa, communications strategist for Campus Life Services (CLS) and an organizer of the CLS team, UCSF2025 was an opportunity to put employee issues such as transportation, wellness and housing on the University’s future map. Those ideas are now being considered for implementation as part of the overall CLS planning for 2014-2015, said Angela Hawkins, associate vice chancellor of CLS.

The team, which was among the top finishers, also managed to make it a fun experience, posting player pictures on Twitter and taking group exercise breaks.

“I think [UCSF2025] is super convenient, I think it’s relevant, I think we should be doing more of these things,” Mapa said. “I think it’s a great way to get community involvement and crowd-source creativity.”

University leaders took notice of the game leaders, offering them a seat at the table to push forward ideas from UCSF2025. UCSF Chancellor Susan Desmond-Hellmann, MD, MPH, also recognized top-scoring teams during her recent State of the University address.

Clark, of Campus Procurement, who’s attended a post-game focus group, said the game succeeded in reaching many people who typically had felt left out of the conversation. “Now you’re going to have 2,000 people that are going to be engaged in the outcome and more engaged in the strategic direction that comes out of it.”