New research by UC San Francisco scientists shows that one of the brain’s fundamental self-protection mechanisms depends on coordinated, finely calibrated teamwork among neurons and non-neural cells knows as glial cells, which until fairly recently were thought to be mere support cells for neurons.

The study, which has implications for understanding neurodegenerative diseases, stroke and other nervous system disorders, adds to a growing body of evidence that glial cells are integral to brain function. 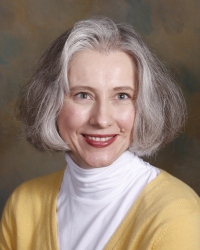 Because this mechanism is localized at synapses, the sites where communication between neurons takes place, it ensures that protective measures will only be taken when and where they’re most needed, said Marta Margeta, MD, PhD, assistant professor of pathology and senior author of the new study.

“The President needs more bodyguards than a Congressman, and with this system you can have your cake and eat it too: protection when you need it, without having to have it everywhere.”

The brain is the body’s hardest-working organ, consuming as much as 25 percent of our overall energy. This metabolic demand makes brain cells particularly vulnerable to damage from oxidative stress, in which reactive oxygen species (ROS), sometimes called free radicals, exert toxic effects on cellular components. ROS damage to neurons has been implicated in Alzheimer’s disease, Parkinson’s disease and other neurodegenerative conditions.

The brain can also be severely damaged when disease or injury – especially stroke – causes neurons to repetitively fire, flooding brain tissue with toxic levels of the excitatory neurotransmitter glutamate, a condition known as excitotoxicity.

To counteract the potential damage arising from ROS, excitotoxicity and other dangers, animals including humans have evolved sophisticated physiological defenses such as the Nrf2 pathway, a molecular network that triggers the expression of a suite of protective genes when cellular function is under threat.

It is Neuroscience 101 that neurons pass on electrochemical messages at communication sites called synapses, but it is less well appreciated that the vast majority of synapses are “tripartite,” consisting not just of a neuron sending a message and one receiving it, but also, nestled alongside each synapse, a star-shaped glial cell called an astrocyte. 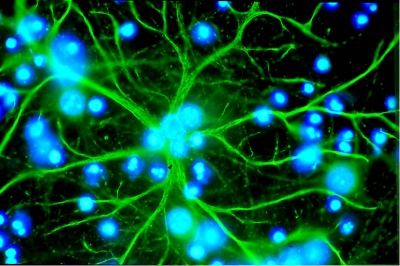 Star-shaped glial cells known as astrocytes, such as the one shown here in green,

in the brain against oxidative stress, which has been linked to neurodegenerative

conditions such as Alzheimer’s disease and Parkinson’s disease. Image from

Experiments in mouse models of Parkinson’s disease and amyotrophic lateral sclerosis (ALS, or Lou Gehrig’s disease) have demonstrated that Nrf2-based neural protection is primarily conferred by astrocytes, but how neurons might alert astrocytes to stressful conditions is poorly understood.

In the new research – published Oct. 21 in the early online edition of Proceedings of the National Academy of Sciences – Margeta, former postdoctoral associate Agata Habas, PhD, now at UC San Diego, and colleagues teased apart the relative contributions of neurons and astrocytes in Nrf2 signaling by performing experiments on cell cultures containing predominantly neurons, predominantly astrocytes, or a mixture of both.

When the research team tried to activate the Nrf2 pathway in predominantly neural or astrocytic cultures by bathing them with a substance that creates conditions mimicking excitotoxicity, they had little success, but in mixed cultures the pathway was set in motion.

These experiments demonstrated that both neurons and astrocytes are necessary for Nrf2 activity. However, because the treatments affected the cultures globally and did not precisely target synapses, the researchers next applied substances that increase the firing of glutamate neurons by acting solely at synaptic sites. Again, Nrf2-related activity was observed only when astrocytes were present in cultures, but significantly, Nrf2 signaling increased in tandem with neuronal firing, suggesting that neurons calibrate Nrf2 activity in astrocytes to keep pace with neural activity.

This precise calibration remained intact even when there was no physical contact between neurons and astrocytes in culture, indicating that neurons secrete some soluble factor that activates Nrf2 in astrocytes.

When excitatory neurons fire and release glutamate neurotransmitter into the synapse, the released glutamate can reach nearby astrocytes, so glutamate seemed a good candidate for the neuronal messenger that induces Nrf2 activity. To test this idea, the scientists applied glutamate blockers to mixed cultures, which indeed prevented Nrf2 activation.

However, direct application of glutamate to astrocytes did not induce Nrf2 activity, which indicates that glutamate release is “necessary, but not sufficient” for Nrf2 regulation, and that future research may reveal other factors are at work at the synapse, Margeta said. In addition to the glutamate-secreting presynaptic neuron, the signal-receiving postsynaptic neuron and even the astrocyte itself may employ signaling molecules of their own to keep the system in balance, she said.

According to Margeta, the control system discovered by her lab keeps the brain from wasting energy on protection when it’s unnecessary. “Too much of a good thing is not good, and I think that’s why there’s precise regulation,” Margeta explained. “This system keeps baseline Nrf2 pretty low and in check, but if something bad happens, you can engage the system and ramp it up.”