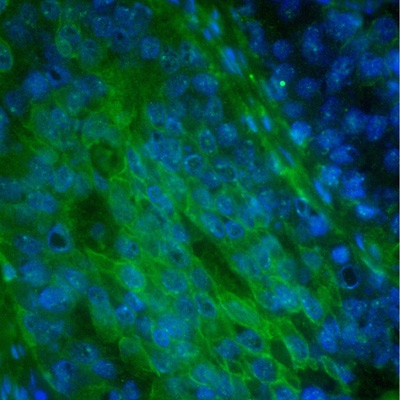 Luika Timmerman, PhD, showed that growth of about one-third of triple-negative

targeted with an FDA-approved drug to slow tumor growth.

Often deadly “triple-negative” breast cancers might be effectively treated in many cases with a drug that targets a previously unknown vulnerability in the tumors, according to a new UC San Francisco study.

UCSF researcher Luika Timmerman, PhD, an investigator in the UCSF Helen Diller Family Comprehensive Cancer Center, found that many cell lines obtained from triple-negative breast cancer are especially dependent on cystine, one of the 20 amino acids that are the building blocks of proteins that all cells need. She used an FDA-approved drug to inhibit activity of a transporter protein that ferries cystine into triple-negative breast cancer cells, and found that it significantly inhibited their growth in culture and when the cancer cells were transplanted into mice.

Timmerman described her discovery in a study published online on Oct. 3  in the journal Cancer Cell.

Roughly one in six women with breast cancer have triple-negative breast cancer, and only about three out of four with this type survive five years or more. These tumors sometimes grow aggressively, advancing from being undetectable to becoming difficult-to-treat between regular screening mammography exams, for instance. 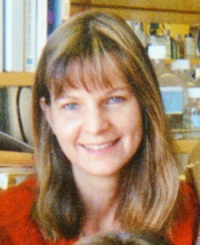 Drugs now are available that effectively target the estrogen and HER2 receptor proteins, which are found in many breast tumors, and these drugs spare most normal cells in the body.

Timmerman found that she could significantly slow growth of triple-negative tumors using an FDA-approved anti-inflammatory drug called sulfasalazine to block a specific cystine transporter called xCT. While sulfasalazine itself would not be appropriate for treating cancer, Timmerman said, it could serve as a “lead compound” that could be used to develop drugs that specifically target xCT on tumor cells.

“This study of human tumors in mice and of breast cancer cell lines demonstrates the potential of targeting not only this cystine transporter, but also other metabolic abnormalities in cancer,” Timmerman said.

Timmerman has spent several years studying the abnormal metabolic behavior of cancer cells, which can differ substantially from the metabolism of normal cells.

“Different cancers seem to acquire different metabolic abnormalities that might in some cases give them a growth or survival advantage,” she said.

“One of the strengths of this study was the large number of different cell lines I was able to test. When I saw similar results in many samples, I felt I was looking at a fundamental metabolic behavior that we could exploit to specifically target triple-negative tumors that overexpress the xCT cystine transporter, a significant group of previously untargettable tumors.”

Timmerman initially focused on investigating the metabolism of the amino acid glutamine among different breast cancer-derived cell lines because glutamine metabolism was long known to be perturbed in cancer. She matched genetic “microarray” data that tracks gene activity to functional differences among tumors and tumor cell lines in culture.

But she also measured amino acids and other molecules in cell culture to detect metabolic changes. When she did so, she noticed that cystine and glutamate levels are frequently correlated in triple-negative cancers.

“We have identified a compelling therapeutic target commonly expressed by breast tumors of poorest prognosis, and a lead compound for rapid, effective drug development,” Timmerman said.

Timmerman conducted many of her experiments using breast cancer cell lines obtained from a large collection developed by one of the senior authors, Joe Gray, PhD, formerly head of the breast oncology program at UCSF and currently associate director for translational research for the Knight Cancer Institute at Oregon Health & Science University in Portland.

Before leading her own lab, Timmerman began her cancer metabolism studies working as a postdoctoral fellow in the lab of another senior author, Frank McCormick, PhD, FRS, director of the UCSF Helen Diller Family Comprehensive Cancer Center.