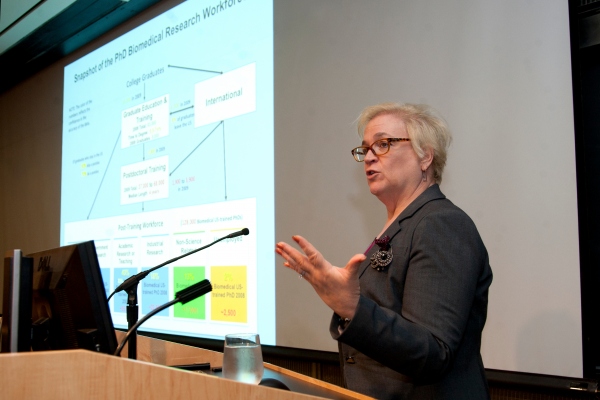 Sally Rockey, PhD, a high-ranking official at the National Institutes of Health, speaks at UCSF on Sept. 24.

Scientific progress and innovation are speeding along, faster than ever before, but arbitrary spending cuts are posing an unprecedented threat.

That’s the sobering paradox of biomedical research according to Sally Rockey, PhD, a high-ranking official at the National Institutes of Health (NIH), who visited UC San Francisco last week.

Rockey, PhD, deputy director for extramural research at the NIH, oversees about $25 billion in grants, which represent more than 80 percent of the NIH budget.

The title of her address says it all: “NIH: Interesting Times, Challenging Times.”

She spoke of the astounding impact of biomedical research on U.S. health: The cancer rate is falling about 1 percent a year. Death rates for cardiovascular disease have dropped 60 percent in the last half-century. And HIV therapies are enabling people in their 20s infected with the virus to live to age 70 and beyond. 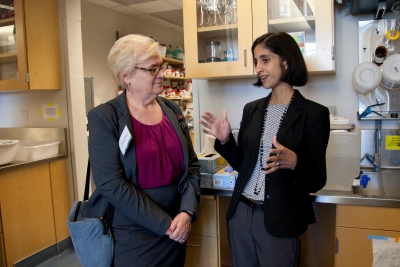 “It demonstrates that when you put money behind an issue or disease, you can move rapidly,” Rockey said, adding that it also shows that NIH-supported research on retroviruses provided a knowledge base when the AIDS epidemic surfaced.

Rockey showed a photograph of the enormous campus of the NIH, which has 17,000 federal employees and another 20,000 contractors. It funds about 25,000 institutions and organizations at any given time, and between 300,000 and 400,000 individuals.

About one of every 500 members of the U.S. working population is in some way supported by the NIH, said Rockey, who was acutely mindful of the possibility of the looming government shutdown that has since become a reality.

Between 1998 and 2003, the NIH budget more than doubled, from $13 billion to $27 billion. But now it has flattened, Rockey said, and about 25 percent of its buying power has been lost because of the increased cost of research.

“We’ve been flat for a long time, and this becomes problematic for us,” said Rockey, who appeared Sept. 24 at Genentech Hall on the UCSF Mission Bay campus. “What really becomes problematic – and the thing that you all feel – is the reduction in the success rate.”

The rate – the number of awards divided by the number of applications – was 17.8 percent in 2012, “really low” compared with a historic high of 30 percent.

“What does this mean?” Rockey asked. “This is a really tough time to think about the future of individuals considering a future in biomedical research, because they know they have only a 15 percent chance of getting funded and there’s a lot of work that goes into putting these proposals together.”

A 'Difficult Time for All of Us'

Rockey added: “This is a difficult time for all of us.”

She said there’s been an incredible reduction in the portion of government funds in the United States going to science, while other countries are investing heavily.

“This is unprecedented, because we are scientific leaders,” Rockey said. “... Who, if not the government, is going to support basic science? This is really, in my mind, one of the roles of the government.”

Sequestration meant the NIH lost 5 percent of its budget overnight, with more cuts likely to come, she said. 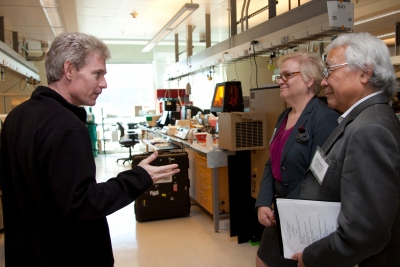 “This sounds very bleak,” Rockey said. “... But we cannot afford ... to let science get ahead of us. We still have to be at the cutting edge, we have to promote new programs and we have to remain innovative. This is a time like never before. ... We have to take advantage of this.”

In that vein, she spoke of a few new NIH programs. One is focused on opportunities for collaborative research at the NIH Clinical Center. Another program, “Transforming Translation,” hopes to take compounds abandoned by drug companies – assuming they’d open up their research – and repurpose them for other diseases.

The Brain Initiative, meanwhile, wants to accelerate the development of innovative new technologies to target brain disorders – the No. 1 source of disability in the United States. Rates of autism, Alzheimer’s, and post-traumatic stress disorder and traumatic brain injury in soldiers are increasing, as well as costs – the annual cost of dementia is $200 billion.

Even though some programs are in the translation area, Rockey emphasized that NIH invests heavily in basic science – about 51 percent of its budget.

Rockey also drew a portrait of the biomedical research workforce, based on NIH findings. The average age of PhD recipients is 31, after seven years of work, and 75 percent go on for a postdoc. They get their first independent job at age 38, and the average age of a principal investigator is 53. It all adds up to a protracted quest that can be daunting for aspiring would-be scientists.

She also discussed where people are going. Only 43 percent of PhDs enter academia, which she said was “eye-opening,” with 18 percent apiece going into industrial research and non-research-related science, and 6 percent in government research.

Rockey also spoke of the BEST (Broadening Experiences in Scientific Training) program, which is experimental. UCSF was just named one of 10 award recipients for “Motivating Informed Decisions (MIND): Careers for the Future Biomedical Workforce.”

At the end of the lecture, Rockey encouraged everyone to read her blog, “Rock Talk,” which she said tells why certain policy decisions are made and is a way to have a casual conversation about the NIH.