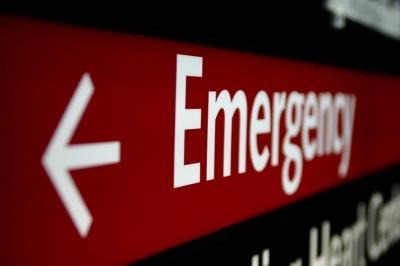 More adults in California are flocking to emergency rooms, especially those on Medicaid who are using ERs at a faster rate than the uninsured or privately insured, according to new UC San Francisco research.

The researchers say the findings could reflect a nationwide trend under the Affordable Care Act. Many uninsured people are expected to transition to Medicaid, and as a result, overall emergency department use may increase because Medicaid patients have higher rates of ER use, as the study found. At the same time, some states are proposing cuts to Medicaid or refusing to expand it, which could exacerbate waiting time in the ER.

The analysis will be published as a “Research Letter” on Sept. 18 in the Journal of the American Medical Association (JAMA).

The study investigated trends in the association between insurance coverage and usage of emergency departments among adults ages 18 to 64.

In California, the number of visits to emergency rooms increased 13.2 percent between 2005 and 2010, from 5.4 million to 6.1 million per year, the researchers reported. 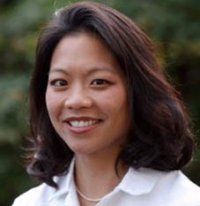 “We undertook the study with an eye toward identifying important coming concerns,” said lead author Renee Y. Hsia, MD, an associate professor of emergency medicine at UCSF. She is also an attending physician in the emergency department at the UCSF-affilated San Francisco General Hospital & Trauma Center and a faculty member of the UCSF Institute for Health Policy Studies.

“All the findings suggest that emergency department use may actually increase with health care reform, instead of decline, if most of the uninsured patients become eligible and enroll in Medicaid,” Hsia said. “These results should not discourage policymakers from pursuing health care reform. Rather we hope our study will shed some light on issues that need to be addressed as we continue to expand insurance coverage to millions of uninsured patients.”

Emergency rooms are deeply affected by insurance patterns over time – and with the upcoming rollout of the Affordable Care Act, which will expand eligibility for Medicaid among many other significant changes, ERs likely will be impacted even more, according to the researchers.

Under the new health legislation, many previously uninsured individuals will qualify for Medicaid in states that choose to expand their Medicaid programs. Some states, however, are proposing major cuts to Medicaid programs, which could further limit individual access to primary care.

While uninsured patients often have been singled out for inappropriate overuse of the ER, the analysis found that ER usage during the study timeframe actually grew fastest among Medicaid beneficiaries, the federal program for people with low incomes. 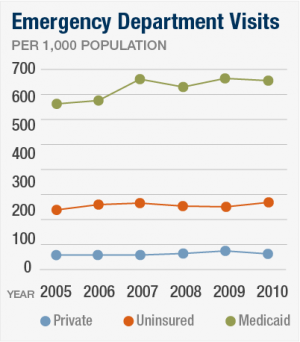 among adults ages 19 to 64, by insurance status.

In addition, Medicaid patients consistently had the highest rate of visits for potentially preventable conditions, the researchers wrote.

The study data were derived from the California Office of Statewide Health Planning and Development’s Emergency Discharge Data and Patient Discharge Data.

The study was primarily funded by a grant from the California HealthCare Foundation. Additional financial support was provided by the National Center for Advancing Translational Sciences; the National Institutes of Health through UCSF Clinical and Translational Science Institute grant (KL2 TR0000143) and the Robert Wood Johnson Foundation Physician Faculty Scholars Program.