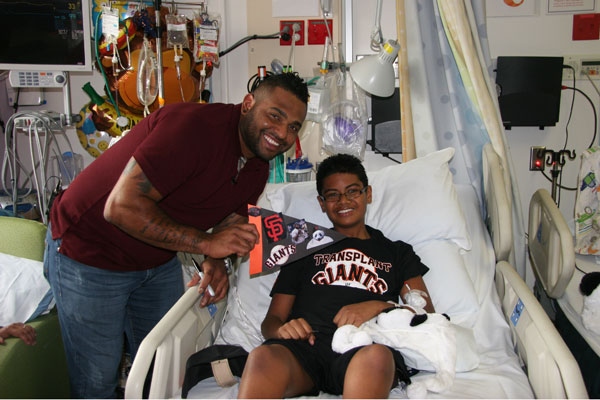 Zach Leapaga poses with Pablo Sandoval, who holds up the special flag that Zach made for the San Francisco Giants star.

San Francisco Giants third baseman Pablo Sandoval hit it out of the park when he visited the patients at UCSF Benioff Children’s Hospital on Aug. 22.

With music pumping and Giants-themed face painting decorating cheeks and arms, the inpatient playroom erupted as the baseball star entered the room with a huge grin across his face. Finally, the group quieted, settling down for a Q&A session with Sandoval – or “Kung Fu Panda” as he is affectionately nicknamed.

The kids asked an array of questions including what his guilty pleasure is (video games), his favorite snack (Snickers and chocolate) and what gum he chews (pink bubble gum), before watching him challenge Kimberly Scurr, executive director of UCSF Benioff Children Hospital, to a bubble gum blowing contest (Panda prevailed). 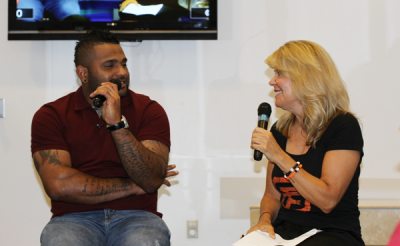 “I came here today to forget about baseball,” said Sandoval. “I just want to see the kids here happy, and every moment with them puts a smile on my face. It’s so special, and I’m rooting for all of them.”

Sandoval’s visit is just one of the ways UCSF Benioff Children’s Hospital strives to meet the developmental and emotional needs of patients.

“We take an individualized approach to helping each child and family we serve, which includes the highest quality medical treatment, compassionate doctors and nurses and a dedicated staff of Child Life specialists,” said Scurr. “Sometimes healing comes in a different form than traditional medicine, and this time it was Panda shaped!”

Sandoval then visited patients at bedside who were unable to leave their rooms for the group visit. One of the patients he visited was 19-year-old Steven Rodriguez, who is fighting an Atypical teratoid rhabdoid tumor (AT/RT), a rare tumor usually diagnosed in childhood. Steven is one of only 30 adult cases ever reported. But when the baseball great entered the hospital room decorated with San Francisco Giants gear, it was all about the immediate bond between the two young men.

“You have to be strong, you have to be positive,” Sandoval told him. The two talked about the season, and life’s challenges, before Steven asked for a hug. Sandoval quickly obliged.

“I can say for certain this was a wonderful high point on what had begun as a really poor day,” said Steven’s mom, Alex Rodriguez. “I can’t tell you how well-timed Pablo’s visit was, and that euphoria will carry Steven through.” 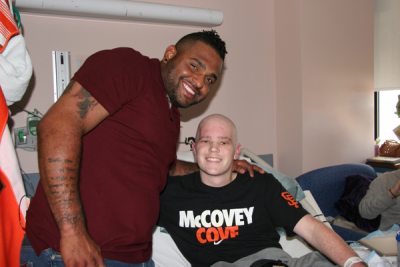 Sandoval signed baseballs, hats, never saying no to any question or photo request. His big heart and warmth were felt through the hospital halls.

Many of the families at the hospital are far from home and uprooted from established support systems during a time of true crisis. The Child Life Department recognizes the integral role hospital child life programs play in the healing process and works with children, teens and their families to ensure that each child's developmental and emotional needs are met during their hospital stays.

“Having someone like Pablo Sandoval take the time to acknowledge the challenges these kids face, and give them support and encouragement, demonstrates that our community cares about children and their families,” said Scurr. “This is often the best medicine, as you can see by all the happy faces!”

And the Kung Fu panda said he got just as much out of the visit as the patients. “I learned so much from the kids I visited today,” said Sandoval. “You’ve got to fight through, and you have to have faith. Never give up.”