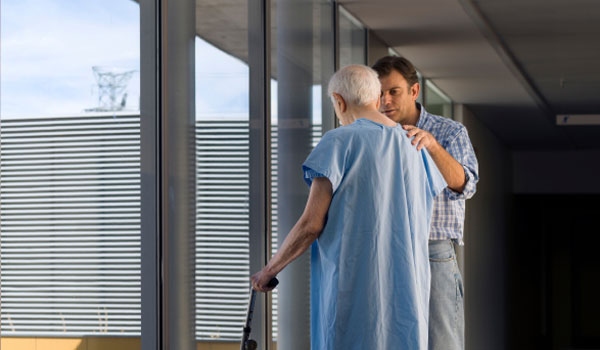 UC San Francisco researchers have developed a two-minute assessment tool to help hospital staff predict a patient’s risk of delirium, a change in mental cognition characterized by severe confusion and disorientation that can prolong hospital stays.

The condition, which occurs in as many as one in five hospitalized patients, tends to develop rapidly and can lead to higher death rates and increased health care costs.

The new tool is designed to be simple, efficient and accurate in helping to assess and treat patients at risk of developing delirium, the scientists said. The tool also can be used to identify patients who might be most suitable for new targeted interventions to prevent delirium, the authors reported.

The study was published online August 7 in the Journal of Hospital Medicine.

“It’s estimated that up to one third of hospital-acquired delirium cases could be prevented with appropriate interventions, but those interventions are resource-intense and can’t be applied to everyone,” said lead author Vanja C. Douglas, MD, an assistant professor of clinical neurology in the UCSF Department of Neurology and holder of the Sara & Evan Williams Foundation Endowed Neurohospitalist Chair.

“Our objective was to develop a tool to predict delirium using elements that could be assessed quickly in the fast-paced environment of a hospital,” Douglas said. “The new tool can be completed by a nurse in two minutes, and provides a clinically useful and practical alternative to existing delirium prediction models.”

An Imbalance of Neurotransmitters

Delirium, an often serious disturbance in a patient’s mental abilities, results in confused thinking and decreased awareness of one’s environment.

The precise sequence of events that take place in the body and brain which results in delirium is not well understood, the researchers noted. It is believed that the combination of an aging brain and acute illness creates an imbalance of neurotransmitters that leads to the confusion and disorientation of delirium. Adding powerful medications like narcotics to the mix can compound the problem.

In the new UCSF study, some 374 patients took part – each was older than 50 and not delirious when admitted to the hospital. The patients were predominately white and lived at home.

The research was conducted during 2010 and 2011 at UCSF and the UCSF-affiliated San Francisco Veterans Affairs Medical Center.

On admission, the patients underwent a structured interview involving questions related to their baseline cognitive function, residence, type of pain, visual and hearing abilities, among other factors. Each patient’s nurses rated them on a scale from “not ill” to near the point of death.

All the patients were assessed for changes in cognition for six days or until they were discharged.

The scientists devised a tool they termed “AWOL,” a mnemonic standing for age (A); unable to spell “world” backwards (W); not fully oriented to place (O); and moderate to severe illness severity (L).

In the "AWOL" tool devised by UCSF researchers, one point is assigned for each of the following:

The researchers found that subjects with higher AWOL scores were more likely to become disoriented and develop delirium. They also found that conversely, those with low AWOL scores were at relatively low risk of developing delirium, meaning that the AWOL tool could stratify patients into high- and low-risk groups.

Once identified, patients at greater risk of delirium should be triaged to an inpatient unit specializing in delirium prevention, the researchers said.

The authors noted some study limitations: non-English speaking patients were excluded for logistical reasons as well as patients with profound aphasia or those in alcohol withdrawal when admitted.

The authors also pointed out that prior research on delirium has focused on patients over age 70 since old age is a known risk factor. But for their study, the authors said they included patients aged 50 or older “because hospital-acquired delirium still occurs in this age group.” Indeed, in the study, 8 percent of patients 50-69 years old became delirious.

“It is imperative to be able to recognize those patients admitted to the hospital with medical conditions who are at risk for delirium so that they can be the focus of targeted prevention and treatment,” said senior author S. Andrew Josephson, MD, director of the UCSF Neurohospitalist Program and holder of the Carmen Castro Franceschi and Gladyne K. Mitchell Neurohospitalist Distinguished Professorship.

The research was supported by the Ruth E. Raskin Fund and a UCSF Dean’s Research Scholarship. These funding agencies had no role in the design and conduct of the study.