UCSF Medical Center ranks among the nation's premier hospitals for the 12th consecutive year and is the best in Northern California, according to the 2013-2014 America's Best Hospitals survey conducted by U.S. News & World Report.

UCSF Medical Center was named the seventh best hospital in the country, earning a spot on the survey's honor roll. Just 18 hospitals made the publication's national Honor Roll, a distinction that signals both rare breadth and depth of medical excellence. UCSF is recognized for innovative treatments, advanced technology, collaboration among health care professionals and scientists, and a highly compassionate patient care team.

A total of 147 of the approximately 5,000 U.S. hospitals evaluated were ranked in at least one specialty. Eighteen of them qualified for the Honor Roll by ranking very high in six or more specialties. 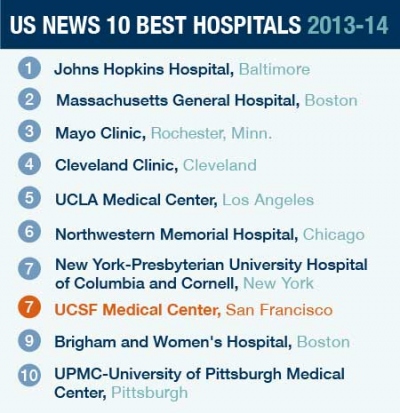 "UCSF Medical Center sees some of the most complex medical cases, and there is no more important work than to care for patients at their most vulnerable time of need. I am very proud that the extraordinary care delivered by our physicians, nurses and staff has once again led UCSF Medical Center to be recognized as one of America’s top ten hospitals,” said Mark R. Laret, CEO of UCSF Medical Center and the UCSF Benioff Children's Hospital.

U.S. News publishes Best Hospitals to help guide patients who need a high level of care because they face particularly difficult surgery, a challenging condition, or added risk because of other health problems or age. Objective measures such as patient survival and safety data, the adequacy of nurse staffing levels and other data largely determined the rankings in most specialties.

“A hospital that emerges from our analysis as one of the best has much to be proud of,” said Avery Comarow, U.S. News' health rankings editor. “Only about 15 percent of hospitals are recognized for their high performance as among their region’s best. Just three percent of all hospitals earn a national ranking in any specialty.”

In 2012, the hospital implemented one of the most comprehensive electronic health records systems in the United States. Additionally, the hospital was awarded the prestigious Magnet designation for excellence in nursing by the American Nurses Credentialing Center. The Magnet Recognition Program recognizes health care organizations that meet certain quality indicators on specific standards of nursing excellence.

"Our electronic health record system already has improved the safety of the care we deliver and communications between our patients and their caregivers,” said Laret, who has been at the helm of the hospital since UCSF Medical Center began achieving top-10 rankings. “Magnet designation is awarded to a select group of hospitals, and it not only recognizes UCSF nurses, but all of our staff and providers, for tremendous teamwork and interdisciplinary care.”

Approximately 6.9 percent of all registered hospitals in the United States have achieved Magnet Recognition status, according to the American Hospital Association.

The hospital rankings have been published online and will appear in print in the U.S. News Best Hospitals 2014 guidebook, available in bookstores and on newsstands August 27.

In a separate set of pediatric specialty rankings released last month, UCSF Benioff Children's Hospital was ranked among the nation's best children's hospitals in nine specialties and is one of the top-ranked centers in California, according to the 2013-2014 Best Children's Hospitals survey conducted by the U.S. News Media Group.

UCSF Medical Center serves as the academic medical center of UC San Francisco. The medical center's nationally preeminent programs include children's health, the brain and nervous system, organ transplantation, women's health and cancer. With about 770,000 patient visits and 38,000 hospital admissions each year, it operates as a self-supporting enterprise within UCSF, generating about $1.6 billion in revenue to cover the operating costs of providing patient care.

11.  Hospital of the University of Pennsylvania, Philadelphia