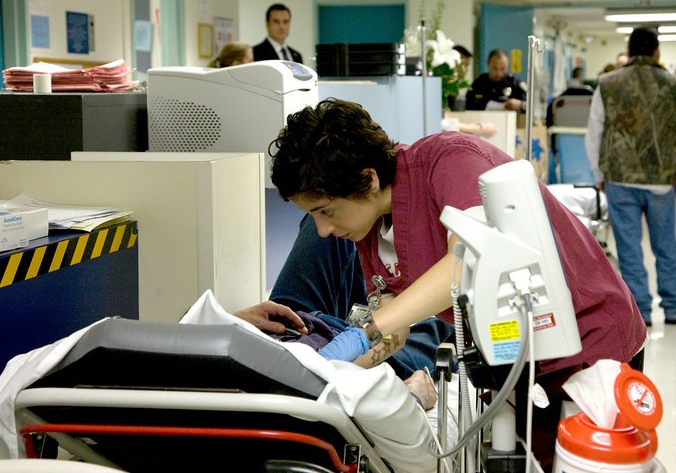 A nurse screens an incoming patient in the Emergency Department of San Francisco General Hospital and Trauma Center.

Geoff Manley, MD, PhD, was heading to a meeting at San Francisco General Hospital and Trauma Center (SFGH) last week when he heard something on the radio about a plane crash at San Francisco International Airport.

Initial news reports were unclear about the severity of the accident and the number injured, but Manley, SFGH’s chief of neurosurgery and an internationally recognized expert in brain trauma, knew one thing: he needed to step on the gas and go to the hospital immediately. 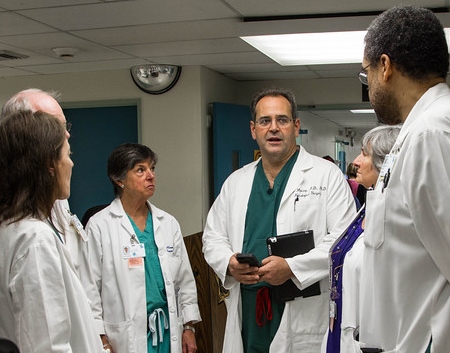 “In trauma care, we must always be prepared to deal with situations as they come and conditions in which lives are won and lost within hours or minutes,” said Manley, who like all physicians at SFGH holds dual appointments with the hospital and UC San Francisco, where he’s a professor of neurosurgery.

By the time he got there, the first wave of patients – with some of the most serious injuries – was arriving at the public hospital, the only Level 1 Trauma Center for the city and county of San Francisco and northern San Mateo County.

Over the next six-and-a-half hours on July 6, three more waves of patients would follow, with conditions ranging from road rash and fractures to spinal cord and brain injuries, from the crash of Asiana Airlines Flight 214.

“I’ve been involved in many other multiple injury events, and yet when you hear that 25 ambulances are en route to your hospital, it’s a pretty ominous thing,” Manley said. “We didn’t know what we were going to see.”

Chris Barton, MD, SFGH chief of emergency medicine, recalls constantly circulating in the Emergency Department to check and recheck that they were staffed appropriately and had all the resources they needed.

“Your initial reaction to an accident of this magnitude is ‘Are we going to be able to handle that many patients?’ But we train for this. We do drills, and everyone knew what their role was,” said Barton, a clinical professor at UCSF. “At SFGH, we have a certain sense of mission that affects everything we do, and that was reflected in our response to this accident. No matter what people asked for, our first answer was, ‘Yes, we’ll make that happen.’”

In all, the SFGH team cared for 67 patients who survived the plane crash, including 36 adults and 31 children. On July 12, hospital officials announced that a third victim, a girl, had died of her injuries, nearly a week after two 16-year-old girls were pronounced dead at the scene of the crash. Six remained hospitalized at SFGH, including two in critical condition.

A Safety Net for More than the Uninsured

The San Francisco Department of Public Health established the city’s only Level 1 Trauma Center at SFGH in 1968, making it one of the first in the nation.

The center, the sole provider of trauma care for the more than 1.5 million people living and working in San Francisco and northern San Mateo counties, treats approximately 4,000 patients each year. In 2011, SFGH became the first hospital in the United States to be certified for a Traumatic Brain Injury program.

Outside of its trauma center, SFGH has long been recognized as San Francisco’s public safety net hospital, providing primary, specialty and hospital care to everyone in San Francisco – regardless of their ability to pay.

However, according to Manley, the “safety net” characterization goes well beyond an individual’s financial status.

“Most people in San Francisco equate us as a safety net hospital for the uninsured, but just as importantly, the trauma team acts as everybody’s safety net,” Manley said. “If you have a significant injury, you come here. Anybody on any day can be one of our patients.”

Partners in Research and Patient Care

Since 1864, SFGH and the UCSF School of Medicine have worked in close collaboration to provide health care services for the people of San Francisco.

SFGH is one of UCSF’s primary teaching hospitals, where medical residents train under UCSF faculty and City staff. Today, more than 2,000 UCSF physicians and staff from all four UCSF professional schools work side-by-side at the hospital with 3,500 employees of the San Francisco Department of Public Health.

Most people in San Francisco equate us as a safety net hospital for the uninsured, but just as importantly, the trauma team acts as everybody’s safety net.

If you have a significant injury, you come here. Anybody on any day can be one of our patients.

“We are fully dedicated to the research, education and clinical care missions that define UCSF, which creates a tremendous sense of synergy and enables us to expand knowledge while we provide care,” said SFGH trauma surgeon Andre Campbell, MD, also a UCSF professor of surgery. “We are one group fortunate enough to have the support of two great institutions.”

The 140-year affiliation between SFGH and UCSF is mutually beneficial: It combines clinical and teaching activities to uniformly provide the highest quality of care to patients, while spending considerably less money than if the two entities functioned independently.

In addition to being an essential training site for UCSF physician residents, SFGH is a major research site for the University. The hospital receives about $150 million in research grants each year, which accounts for 25 percent of all National Institutes of Health grants awarded to the entire University.

“Because all of the physicians at SFGH are UCSF faculty, we have highly trained specialists who are here to take care of patients and do research,” said Sue Carlisle, MD, PhD, an anesthesiologist and vice dean of the UCSF School of Medicine at SFGH. “We are at the cutting edge of research on the care of trauma patients, from traumatic brain injury to violence prevention to the interface of mental illness and trauma, and this translates into better care locally and globally.”

Pulling the Best Resources Together

In an emergency event such as the Asiana Airlines crash, all aspects of care must be increased and coordinated immediately, Carlisle said. This meant emergency medicine doctors, trauma surgeons, neurosurgeons, orthopedic surgeons, anesthesiologists, radiologists, pediatricians, critical care doctors, nurses, social workers, blood bank workers, administrators and many others all came together in an instant to ensure that every person received the highest-possible level of care. 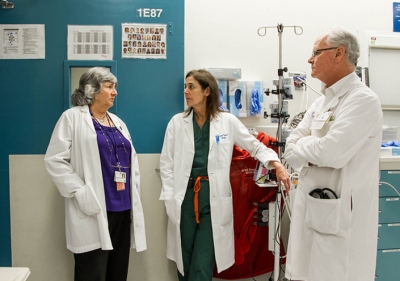 On the morning of July 6, M. Margaret Knudson, MD, chief of surgery at SFGH, worked with Campbell and others on site to begin assembling a team that would be ready to triage patients upon their arrival. Knudson used lessons she learned as a visiting surgeon treating injured soldiers at both Landstuhl Regional Medical Center in Germany and Balad Air Force Hospital in Iraq to quickly treat the most critically injured.

In the first eight hours, the radiology team had read more than 70 CT and MRI scans and well beyond the average number of X-rays.

“This was the biggest single disaster that this hospital has ever had to deal with, but it’s also where the trauma team gets to shine,” Campbell said. “The importance of a Level 1 Trauma Center comes to the forefront in emergencies such as this, because we are able to provide all the services a patient needs with a rapid, coordinated response. It truly is a team effort.”

SFGH is currently building a new nine-story hospital that will continue to improve the work of the trauma center team, providing health care providers with more capacity and cutting-edge technology.

When it opens in 2015, the Emergency Department at SFGH will increase from 28 to 60 beds, with the ability to further expand up to 120 beds in a mass injury incident such as an earthquake. 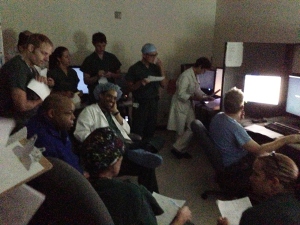 In this photo taken by neurosurgeon Geoff Manley, the trauma team gathers on the evening of July 6 to review each case handled in the aftermath of the Asiana Airlines crash.

By evening of that Saturday, after the last wave of patients for the day had been admitted and stabilized following the plane crash, Manley, Campbell, Barton, Knudson and the rest of the team gathered to review every case.

The assembled group – a diverse mix of experts representing the full spectrum of trauma subspecialties – huddled around a single computer screen in a dimly lit room, examining each record to ensure they hadn’t missed anything. Moved by the moment, Manley snapped a photo of the scene on his phone.

“At the end of the day, it’s all about the people you work with. We are all here because trauma medicine is what drives us, and we all feel a great deal of pride in what we do,” Manley said. “I don’t think I’ve ever been so proud to be a part of this hospital.”