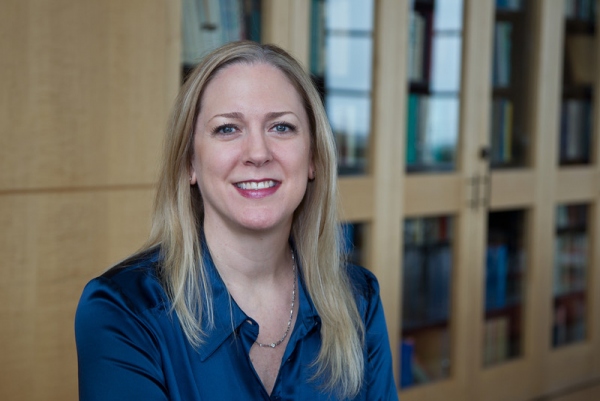 Lisa Kroon, PharmD, has been named the new chair of the Department of Clinical Pharmacy within the UCSF School of Pharmacy, effective July 1.

Kroon has served as interim chair of the department since July 2012, when the previous chair, B. Joseph Guglielmo, PharmD, became interim dean and later dean of the School of Pharmacy.

“The leadership of both the Department of Clinical Pharmacy and the UCSF Medical Center’s Department of Pharmaceutical Services unanimously supported Lisa’s selection,” Guglielmo said. “We are fortunate to have such an accomplished, even-keeled department chair.”

The UCSF School of Pharmacy has the nation’s top-ranked Doctor of Pharmacy degree program, according to U.S. News & World Report, and tops the list for research funding from the National Institutes of Health.

Kroon said the purpose of her department’s work in research, education, and patient care “is to advance the safe and effective use of therapeutics to improve health.”

“The Affordable Care Act has opened a lot of eyes to what quality care can be, how it can be provided, and by whom,” she said. “We’re building the evidence for new ways for pharmacists to improve patient health – and even to lower costs – and to prepare students for what is truly a new day in pharmacy practice.”

The UCSF Medical Center is a close collaborator. Kroon adds, “It’s a potent combination with the potential to improve medication use, safety and effectiveness in patient care settings – inside and outside the hospital – in bold new ways we can’t even imagine today.”

While serving as interim chair of the department, Kroon began overseeing a series of new pilot pharmacy patient-care programs in community settings that are being developed by department faculty members.

Kroon has played an integral role at UCSF in the care of patients with diabetes, chronic illnesses and tobacco dependence. She is a pharmacist and co-director of the UCSF Fontana Tobacco Treatment Center. She also cares for patients in the medical center's adult Diabetes Clinic, Diabetes Teaching Center and adult Primary Care Clinic. She continues to work closely with leaders of the Primary Care/General Internal Medicine Residency Program to coordinate the chronic care clinic, an interprofessional clinic that she co-developed in 2001, for primary care medical residents and pharmacy students.

As an educator, Kroon teaches smoking cessation to pharmacy, medical and dental students at UCSF, preparing them to take an active role in tobacco treatment. She co-developed a curriculum, called Rx for Change: Clinician-Assisted Tobacco Cessation, used across the nation to train pharmacy students and other health professionals and students to help people quit smoking.

Kroon also was a leader in supporting a ban on the sale of tobacco in San Francisco pharmacies, working with the mayor’s office and the San Francisco Department of Public Health. Kroon is the lead author for the diabetes chapter in Applied Therapeutics: The Clinical Use of Drugs, which is a leading pharmacy textbook used nationally and internationally.

Kroon assumes the position of chair in a department with a growing history of research success.  From 2006 to 2012, the department saw a 40 percent increase in overall faculty research funding, including grants from the National Institutes of Health.

“We’ll continue to strengthen the research we do to bring basic and translational science closer to clinical application in patients,” Kroon said. “And we’ll move aggressively in studying new ways to ensure patients in the community get medications individualized for their particular health needs. There’s urgency on both fronts.”

As chair, Kroon will oversee a department that administers large research programs such as the Center for Translational and Policy Research on Personalized Medicine, which studies personalized medicine and its translation into clinical care and health policy. Also under the department umbrella are high-impact programs such as the California Poison Control System, which runs a telephone hotline that provides the public immediate, free and expert treatment advice in cases of exposure to poisonous or toxic substances seven days a week, 365 days a year.

Kroon attended the University of Michigan, where she earned a PharmD degree before completing residencies at the UCSF School of Pharmacy. She has held faculty positions at UCSF since 1996 and became a full professor with the Department of Clinical Pharmacy in 2008.