The condition, marked by rapid respiratory failure, has a 30- to 40-percent mortality rate and is caused by major lung injury from trauma, septic shock, pneumonia, chemical exposure or other causes.

While current treatment focuses on keeping patients breathing through a mechanical ventilator, cutting-edge research led in part by UC San Francisco’s Carolyn Calfee, MD, an associate professor of medicine, is opening the door to the possibility of diagnosing and treating ARDS before it becomes life-threatening.

Key to Calfee’s work is the Early Assessment of Renal and Lung Injury (EARLI) study at UCSF Medical Center, a novel research design that enrolls patients at risk for ARDS straight from the emergency room (ER) – before their condition has taken a debilitating toll. A major hurdle to ARDS research is that the condition is so acute and fast-moving that by the time patients normally participate in studies, their health is significantly deteriorated.

“Most studies of critically ill patients enroll them after they reach the intensive care unit, by which time the horse is often out of the barn, in terms of the progress of their critical illness,” said Calfee, who works in the Pulmonary and Critical Care division at the UCSF School of Medicine.

“This cohort allows us to study the biology of the early phase of critical illness, when we may have the biggest chance of developing a successful intervention to prevent acute organ failure,” she added.

The ongoing EARLI study has already led to the major discovery of a blood marker that indicates a high risk for developing ARDS. The finding by Calfee and her colleague, Ashish Agrawal, then a fourth-year medical student enrolled in the Clinical and Translational Research Fellowship Program, was highlighted in the American Journal of Respiratory and Critical Care Medicine.

Calfee is also studying the effects of cigarette smoke exposure on susceptibility to ARDS. She and her team have identified that both smoking and significant exposure to secondhand smoke are associated with nearly triple the chance of developing ARDS after severe blunt trauma resulting from a car accident, for example.

A specialist in pulmonary and critical care, Calfee credits the K Scholars program managed by UCSF’s Clinical and Translational Science Institute (CTSI) with helping to ramp up her research specialty, in part by leading to meaningful collaborations. The program is designed to support the research of junior faculty committed to translational medicine by providing four or five years of partial salary funding for research, assistance with biometrics, mentorships, and regular project review sessions with a multidisciplinary group of K Scholar peers. 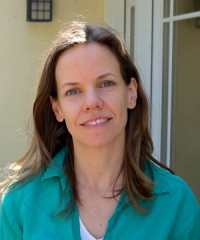 “In addition to the tangible resources of the salary support and associated protected time, which is critical, the K Scholars program also provided me with a nurturing, dedicated community of similar-stage junior investigators, paired up with more senior mentorship and guidance that really helped to make a huge academic university feel small and accessible,” Calfee said.

Kirsten Bibbins-Domingo, MD, PhD, MAS, director of the K Scholars program, highlighted that “Carolyn approaches the study of critically ill patients in a novel way - examining disease trajectories even before these patients enter the ICU. She has developed great multidisciplinary collaborations with emergency physicians and other intensivists, and this approach will very likely yield new insights that will be important to the care of critically ill patients.”

UCSF's CTSI is a member of the Clinical and Translational Science Awards network funded through the National Center for Advancing Translational Sciences (grant Number UL1 TR000004) at the National Institutes of Health. Under the banner of "Accelerating Research to Improve Health," CTSI provides a wide range of resources and services for researchers, and promotes online collaboration and networking tools such as UCSF Profiles.