By many standards, UCSF’s Program for Breakthrough Biomedical Research (PBBR) is small: Its grants represent one-half of 1 percent of the overall research budget at UC San Francisco.

But its aim is high, and its impact is huge.

At a celebration of PBBR’s 15th anniversary at Genentech Hall on UCSF’s Mission Bay campus on May 23, program director Keith Yamamoto, PhD, said PBBR has generated more than 1,500 publications, more than 60 patents – and about $1.2 billion in subsequent funding. 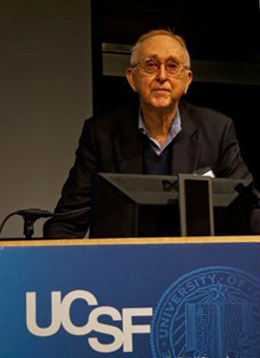 Philanthropist Herb Sandler, whose generous support made the Program for Breakthrough Biomedical Research possible, addresses the audience gathered for the 15th anniversary celebration.

In addition, Yamamoto said, PBBR has also produced more than $100 million to support research at UCSF through indirect cost recovery, and has led to more than 300 National Institutes of Health (NIH) research grants.

“You support a bold idea that nobody else will support, and it works, and it turns into more science and more grants,” said Yamamoto, executive vice dean of the UCSF School of Medicine and UCSF vice chancellor for research. He said PBBR – which he pronounced “Pibber” – is a unique research program that “dares our scientists to dig deeper, ask tougher questions, and invent novel ideas and approaches that defy the status quo.”

The May 23 event paid tribute to the visionary philanthropists Herb and Marion Sandler who provided the money that made the program possible.

Herb Sandler recounted how 17 years ago, then-Chancellor Joseph Martin, MD, PhD, told them UCSF had established a “discovery fund” to support new thinking in basic science, but that in four years, “it had not raised a cent.”

“Well, he had us, for one of our philanthropic principles is to look for gaps, to have transformative impact and to change the lives of people for the better,” Sandler said. “We have a high tolerance for risk. We think all foundations should operate as venture capitalists.”

Pushing the Bounds of Research

Marion Sandler, who died last year, was hailed not only as a pioneering woman in business and philanthropy, but also for her high standards. “I remember the spark in eyes when she was pushing us to push ourselves harder and higher, which was a fantastic thing,” Yamamoto said.

Yamamoto also singled out Ann Getty for “establishing a significant endowment for bold basic science,” as well as other donors. In more recent years, he said, global pharmaceutical giants Sanofi-Aventis and Roche have signed on as PBBR partners, providing money to support the research mission and helping find ways to translate gains from the laboratory into therapies to help patients. 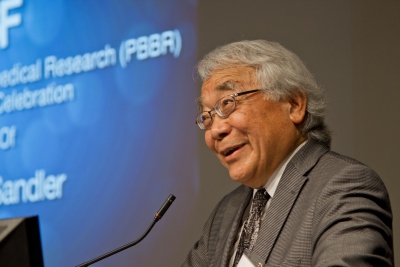 Keith Yamamoto, PhD, speaks during the May 23 panel discussion.

The NIH wants to know, when it funds a research project, that it will produce results, Sil said. But, she said, “if you’re going to do innovative science, you have to have the risk of failure, because if you’re going to try something new, you can’t know if it’s going to work. Without that opportunity, I feel that what we end up doing is much more pedestrian.”

DeRisi – who has done groundbreaking work into illnesses from SARS to malaria – said he has failed frequently and spectacularly, and that he always learns much from such failures.

DeRisi said UCSF’s collaborative culture has led to many scientific breakthroughs. He described one PBBR grant that enabled him to work with Homer Boushey, MD, UCSF’s chief of allergy and immunology, and Donald Ganem, MD, a professor of microbiology and immunology and, like DeRisi, a Howard Hughes Medical Institute investigator.

Ultimately, that partnership led to a new approach to identifying new viruses using the ViroChip microarray, which has enabled UCSF scientists to identify the cause of numerous viral outbreaks over the years, including quickly validating the virus behind Severe Acute Respiratory Syndrome (SARS) in 2003.

“These were labs that normally wouldn’t have written a grant together at all,” DeRisi said. “No granting agency in their right mind would have funded what we wanted to do. … [But] out of it came the SARS study. It had completely unintended consequences.”

Willingness to Fail Critical to Success

As one more example of the sort of risks PBBR enables scientists to take, DeRisi described getting a letter from a private citizen, asking him to look at “Larry,” her ailing boa constrictor.

“Most people will shred that letter after checking it for white powder, but we got a whole project out of it,” DeRisi said. “We found that the ancestor of what we now know as the largest family of human hemorrhagic fever viruses actually has a much larger diversity and repertoire in reptiles, which is probably from whence they came originally. That wasn’t known.” 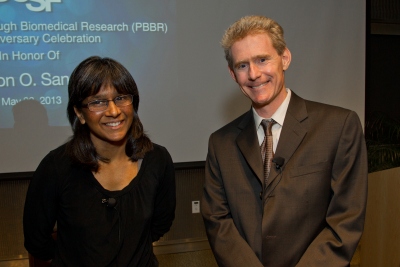 Panelists Anita Sil, MD, and Joseph DeRisi, PhD, pose for a photo during the event.

Gilman said the willingness to fail is a critical ingredient in successful science. “Unless you’re some sort of complete miracle worker, not everything is going to work and you’re obviously going to have failures,” he said. “If you’re not having failures, you’re not working on hard problems. You’re not working on things that are interesting.”

Gilman lobbed what he called a few “stink bombs” into the discussion, criticizing the modern scientific establishment for keeping people in school too long, working as postdoctoral fellows, when they should be running their own labs. Older researchers “need to get out of the way,” he said, freeing up funds so that people can do their best work while they’re still young and daring. “We are taking away people’s most creative years while they’re still in postdoctoral fellowships,” he said.

That notion is the force behind the UCSF Sandler Fellows Program, which was one of the first programs of its kind nationwide – modeled on the Whitehead Fellows Program at the Massachusetts Institute of Technology. It remains one of a only a handful of such programs in the United States. The Sandler Fellows Program, which includes PBBR as well as similar fellowships in Systems Biology and at the California Institute for Quantitative Biosciences or QB3, provides five-year funding for exceptionally promising young scientists to set up their own labs as principal investigators, rather than as junior faculty, enabling them to go far beyond a traditional fellowship and focus solely on doing the best science.

The UCSF Sandler Fellows Program brings exceptionally promising young scientists to UCSF in a special capacity, in which they establish independent research programs with the sole mandate to do their best science.

This program seeks recently graduated students with PhD or MD degrees whose potential as investigators indicates they would benefit from a sheltered independence.

Institutional support is granted for five years, in part through the generous support of the Sandler Foundation, the Systems Biology Program, and the California Institute for Qunatiative Biosciences or QB3, and is sufficient to maintain a small laboratory of two to four members.

Desmond-Hellmann said the University is taking those ideas to heart. She serves on Facebook’s board of directors, and is looking to Silicon Valley for ideas on how to re-tool training programs. Desmond-Hellmann and UCSF provost and executive vice chancellor Jeffrey Bluestone, PhD, met with medical students who said they wanted mechanisms to create apps and other innovations to “do something important in life sciences,” the chancellor said. “We said, ‘Aren’t you memorizing anatomy? Aren’t you busy?’ They said, ‘The world is changing. We don’t want to wait.’”

“High tech has a number of lessons for us in the life sciences,” Desmond-Hellmann said. “We’re so linear and staggered in how we train people. In high tech, as soon as you learn how to program, you are off to the races.”

Sandler said UCSF should not change too much.

The Sandlers had brought an emphasis on excellence and collaboration to their business, taking a small Oakland savings and loan and transforming it into a Fortune 500 powerhouse, Golden West Financial Corp. In their philanthropy, they found a kindred spirit in UCSF.

“UCSF had special qualities that had informed our business strategy, namely an unremitting focus on excellence, and a unique culture of collegiality and promotion of a collaborative and mutually supportive community,” Sandler said. “There is a unique culture at UCSF. Be thankful. Protect it. Don’t let it change.”

He said the current climate in Washington, which has seen the sequester threaten to set scientific funding back two years, shows that philanthropists need to step up to support programs like PBBR and institutions like UCSF.

“PBBR is not only an extraordinary success, it's virtually the only game around,” Sandler said.