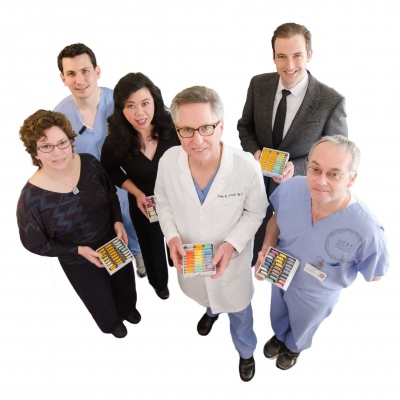 Prostate cancer ranks as the most common internal malignancy diagnosed in men in the United States, but often does not require extensive treatment.

A study using tissue samples from men who underwent surgical removal of the prostate at UC San Francisco confirmed that a genetic test that measures cell cycle progression (CCP) — an indicator of how rapidly cancer cells are growing and dividing — can be a useful tool for predicting who will have a recurrence of the disease, especially when combined with existing information from laboratory and pathology tests.

The CCP score provides a biomarker that eventually might help guide decisions about whether to pursue additional treatment after surgery, such as radiation therapy.

The study, published in the Journal of Clinical Oncology (2013 Apr 10;31(11):1428-34), used the UCSF Urologic Oncology Database to access tissue samples and medical records from men who had undergone prostatectomy at UCSF and been followed for at least five years after surgery.

A commercial laboratory operated by Myriad Genetics, the company that developed the test, conducted genetic analysis of the tissue samples to determine a CCP score in 413 patients. The researchers at UCSF then examined how well the CCP score predicted which men had a recurrence of their disease after surgery.

The CCP score was also evaluated with another validated predictive score, the Cancer of the Prostate Risk Assessment post-surgery score (CAPRA-S). The CAPRA-S score is based on preoperative PSA levels and information gleaned from surgery, including how much the tumor has invaded tissues surrounding the prostate and how aggressive he cancer cells look when examined under a microscope.

Investigators found that the CAPRA-S and CCP together they were more useful than either alone, and that adding the CCP was especially helpful in men who appeared to have low-risk disease based on the CAPRA-S score alone.

In addition to the 413 patients in the UCSF group, the researchers also looked at the predictive results of the CCP combined with the CAPRA-S in a group of patients previously studied at the Scott and White Clinic in Georgetown, TX, for whom longer-term follow-up was available. The combination of the CCP and CAPRA-S again accurately predicted recurrence in this group.

“One of the big challenges in prostate cancer is knowing when and how aggressively to treat patients,” said Matthew R. Cooperberg, MD, MPH, lead author of the study. “Biomarkers such as the CCP can provide valuable data to guide treatment decisions.”

The UCSF Urology Department is currently running additional studies with the CCP score, as well as other promising biomarkers and imaging tests, in men who have not undergone surgery or other treatments.

“Our hope is that these tests will help more men with low-risk prostate cancer avoid unnecessary treatment, while ensuring that those with more aggressive cancers do not miss the window of opportunity for cure,” said Cooperberg.

This research was funded by Myriad Genetics and by grants from the Department of Defense and National Cancer Institute.