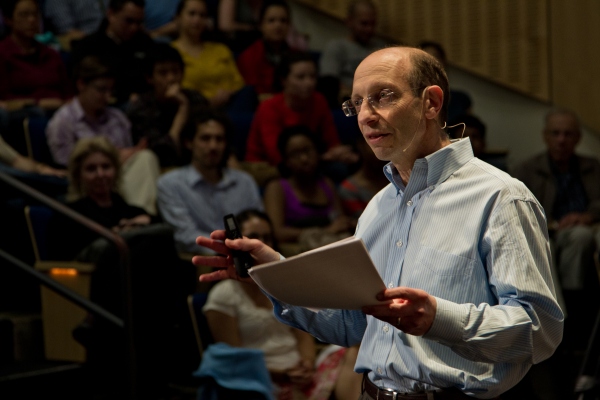 Beloved UCSF faculty member Dan Lowenstein was selected by students to answer one question: "If you had but one lecture to give, what would you say?" Hundreds of students voted and turned out for Lowenstein, MD, director of the Epilepsy Center, who delivered a heart-warming 2013 Last Lecture in a packed Cole Hall Auditorium on April 25.

The Last Lecture belongs to a venerable academic tradition designed to answer a single question: “If you had but one lecture to give, what would you say?”

On April 25, Dan Lowenstein – one of UCSF’s most beloved professors – said a lot. “I must admit that the experience of thinking about what I would share with others if this were my last lecture, or my last day alive, is not foreign to me. I think often about death, not in a morbid way, but because it is so crystal clear that death can come to us at any moment. As Mahatma Gandhi famously said: 'Live as if you were to die tomorrow. Learn as if you were to live forever.'” 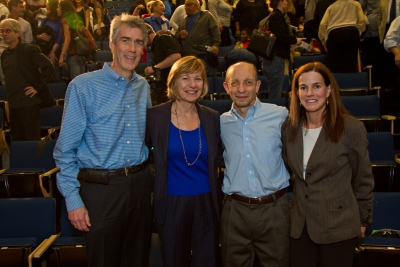 UCSF students had voted the 59-year-old Lowenstein, MD, to advise them about values, how to contribute to the community and how to cope when life delivers the unexpected.

“The Last Lecture is addressed to students. It comes from the heart. It is instructive about living life in the broadest terms,” said Maureen Conway, director of the Student Activity Center at UCSF, which helped support the Last Lecture, along with Associated Students of UCSF and Graduation Student Association.

The program, part of UCSF Alumni Weekend, was launched at UCSF in 2012 when students selected Chancellor Susan Desmond-Hellmann, MD, MPH, for the honor.

Desmond-Hellmann also highlighted the work of researchers who are innovating to develop cures and better treatments for the world’s diseases. “At UCSF, science equals service, and what a great way to help the community,” she said.

Lowenstein, professor and vice chair of neurology at UCSF, is director of the UCSF Epilepsy Center and of Physician-Scientist and Education Training Programs for the UCSF School of Medicine. He was introduced by Neha Joshi, a third-year medical student and the inspiration behind the Last Lecture series at UCSF. “I have to admit the urge to deliver a lecture on epilepsy or headaches is totally overwhelming,” Lowenstein told a laughing Cole Hall audience that included the chancellor, students, faculty, alumni, staff, friends and even some of his patients.

“We received quite a few phone calls from folks who were definitely concerned that this was going to be his last lecture or that he would be announcing his retirement,” Joshi said.

He started off by detailing an exceedingly arduous canoe expedition with his best friend across the Quebec watershed in 1973. They paddled about 700 miles and encountered rain, cold, black flies, mosquitoes, hunger and a continual struggle with the unknown. When their canoe capsized, they lost a significant amount of their food supply.

“We expected to fish and hunt, but other than some good fishing in the first week of the trip, the only thing we caught was a porcupine,” Lowenstein said. “And I can tell you: There’s isn’t a lot of meat on a porcupine.”

The 10-week trip had an enormous impact. “It demonstrated the awesome power of friendship and the way we complement each other in our abilities and our perspectives,” he said. “And it demonstrated the importance of absolute focus and attention to the task at hand, and our capacity to prevail under the most trying of circumstances...And most importantly, it taught me not to be afraid of ‘adventures with a capital A.’” 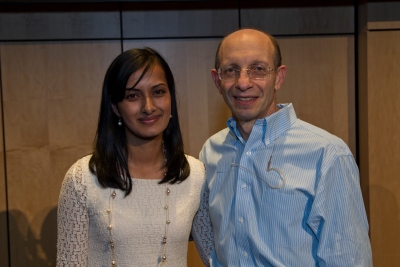 Neha Joshi, a third-year medical student who organized the Last Lecture, stands with Dan Lowenstein after his address.

Then he spoke of his work passions, tied to teaching, being a physician/scientist and helping people with epilepsy. “When I walk into a room to teach, I feel like Charlie entering the Chocolate Factory! And I have had the great fortune to work at UCSF, a place that attracts some of the most talented and caring students on the planet, as well as the most creative and collaborative faculty and staff.”

The person who influenced Lowenstein the most as a teacher was Brian Biemuller, his high school biology teacher, who “made the classroom come alive.” A month ago they talked about what makes a great teacher. “It really only boils down to one simple single question: Do you love your students?” Lowenstein said.

Although he’d never considered a career in medicine while growing up in New Jersey, Lowenstein said a trip to Bolivia 36 years ago to work as a health volunteer changed his mind. “The path was obvious: I wanted to become a doctor,” he said. “The mixture of science and humanism, the opportunity to serve others in such a fundamental way, the rawness, the poignancy, the intensity all lined up to become my dream.”

Call to Continue the March

Then he spoke of justice and what UCSF was like in 1968, when it was so segregated that people of color had to go to the basement to eat or use the bathroom. The “basement people,” as they were called, organized a meeting in Cole Hall that led to the birth of the Black Caucus and a transformation of the UCSF campus.

“They are true heroes. All of you here owe them an enormous debt,” said Lowenstein, who asked about 12 original members of the Black Caucus to stand up. “No matter what path you choose, I hope you take up the banner of the basement people and other crusaders who have the insight and the compassion to see the inequities and in the injustices that continue to exist.”

“Despite the progress, despite all the effort, our work is not done, including, as I said before right here at UCSF. So, pick something that is far bigger than you and figure out how to contribute, at least in some small way, to this very long march.”

“Two-and-a-half years ago, we lost our son, Alex, to a terrible accident,” Lowenstein said. “He was 24. ... When Alex passed away, the four of us were cast into blackness, falling, tumbling out of control, beyond understanding.’’ But a fabric slowly took shape that helped start a healing process. “It was formed by the connections we have with the people in our world,” he said. 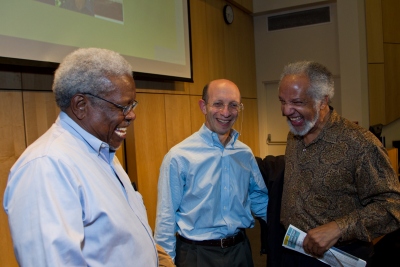 He ended with a story about a traveler, an old monk and a chess game in a monastery. Its moral: Great concentration and great compassion. “Make these the watchwords of your life,” Lowenstein said. “Let’s add one more phrase: great love. Treasure the people in your life.”

After the lecture, Elba Clemente-Lambert, 71, a Black Caucus stalwart who had been a neurology secretary at UCSF, said, “I was just so touched. I had to tell Dan, ‘You brought tears to our eyes.’”