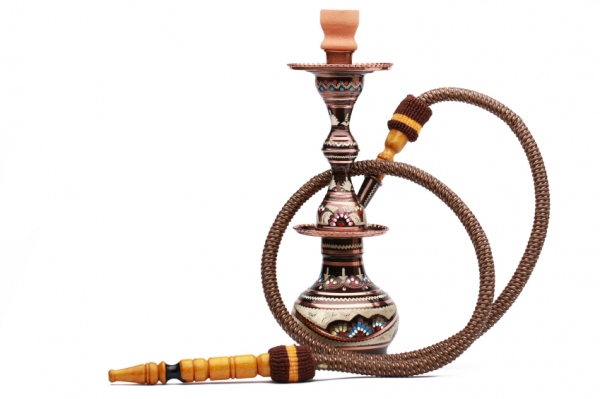 Smoking tobacco through a hookah is a pastime gaining popularity among the college crowd, but many mistakenly believe that using the fragrant water pipe is less harmful than smoking cigarettes.

In a new study at UC San Francisco, researchers measuring chemicals in the blood and urine concluded that hookah smoke contains a different – but still harmful – mix of toxins. The findings are published in Cancer Epidemiology, Biomarkers & Prevention, a journal of the American Association for Cancer Research.

“People want to know if it is a lesser health risk if they switch from cigarettes to smoking a water pipe on a daily basis,” Jacob said. “We found that water-pipe smoking is not a safe alternative to cigarette smoking, nor is it likely to be an effective harm-reduction strategy.”

And compared to non-smokers, Benowitz said, “If you are smoking from a hookah daily, you are likely to be at increased risk for cancer.”

Smoking tobacco from a hookah is common in many Middle Eastern countries. In the United States, water pipe tobacco usage traditionally had been most popular among people of Middle Eastern ancestry.

However, a 2009 survey found that three in 10 university students had smoked tobacco from a water pipe on at least one occasion, with hookah use being disproportionately popular among white students, males, and fraternity and sorority members.

The UCSF study included eight men and five women, all of whom had previous experience smoking cigarettes and using water pipes. Benowitz and Jacob had the volunteers smoke an average of three water pipe sessions or 11 cigarettes per day.

Some of the Toxins Inhaled When Hookah Smoking

Levels of a benzene byproduct doubled in the urine of volunteers after using a hookah in comparison to after smoking cigarettes. Occupational exposure to benzene has been shown to increase the risk of developing leukemia.

Furthermore, the researchers measured carbon monoxide in the breath over 24 hours and found levels 2.5 higher after water pipe use in comparison to cigarette smoking.

The differences in the slew of toxins that ended up in the bodies of volunteers were due largely to the fact that the smokers were smoking two different materials, according to Benowitz. Hookah users are smoking more than just tobacco.

“You’re basically burning a charcoal briquette on top of the tobacco,” Benowitz said, “and most of what you’re smoking is a moist fruit preparation, which is mixed with the tobacco. It smells good and it tastes good.”

However, Jacob said, “In addition to delivering toxic substances from the charcoal and tobacco, the heat causes chemical reactions in the mixture which produce toxic volatile organic compounds (VOCs) and polycyclic aromatic hydrocarbons (PAHs). Some PAHs are highly carcinogenic and can cause lung cancer.”

Intake of nicotine, the addictive component of tobacco, was less with water pipe use. Among those not yet addicted, the most common pattern of hookah use in the United States – about once per week – is not likely to cause addiction, Benowitz said.

In general, exposures for various known toxins differed for the two modes of smoking, the researchers found.

Individuals vary in how their bodies metabolize and excrete toxic substances, so for a better comparison, the researchers had the same person smoke cigarettes and a water pipe on different days.