Molly Cooke, MD, FACP, a professor of medicine at UC San Francisco, has been named President of the American College of Physicians (ACP), the nation’s largest medical specialty organization. 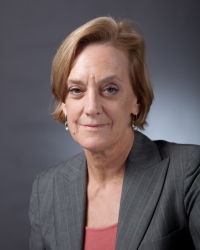 Cooke has been a Fellow of the American College of Physicians (FACP) since 1986. FACP is an honorary designation that recognizes ongoing individual service and contributions to the practice of medicine. She previously served as President-elect of the American College of Physicians, and on the Board of Regents of the ACP since 2008; the Board of Regents is the main policymaking body of ACP. Cooke was also chair of the Board of Governors in 2009-2010. She also served as the Governor of ACP’s California Northern Chapter.

Cooke was appointed Director of Education for Global Health Sciences at  UCSF in July 2012. She is an author of "Educating Physicians: A Call for Reform of Medical School and Residency," published in 2010, and was the recipient in 2006 of the AOA Robert J. Glaser Distinguished Teacher Award, a national award given by the Association of American Medical Colleges (AAMC).

Cooke's medical practice focuses on the care of patients with HIV and other chronic illnesses. Her major professional contributions include seminal works in HIV ethics during the early years of the epidemic. More recently she has made advancements in medical education, establishing the Haile T. Debas Academy of Medical Educators, a professional development program in the school of medicine at UCSF.

A leading expert on medical education and educational research as well an acclaimed teacher, she has twice received the Kaiser Family Foundation Teaching Award as well as a UCSF Academic Senate Award for Distinction in Teaching. In 2006, she was awarded the AOA/Robert J. Glaser Distinguished Teacher Award by AAMC; in 2010, she received the Career Achievement Award in Education from the Society for General Internal Medicine.

Board certified in internal medicine, Cooke is a graduate of Stanford University School of Medicine, and completed her internal medicine residency at UCSF.  She has been active in the educational, advocacy and governance activities of ACP both regionally and nationally. She has served on the board of the All-California ACP Services organization, which works with the legislature to advance the interests of internists and patients in California and served as well as Vice-Chair of the ACP Health and Public Policy Committee.

The American College of Physicians (www.acponline.org) is the largest medical specialty organization and the second-largest physician group in the United States. ACP members include 133,000 internal medicine physicians, related subspecialists, and medical students. Internal medicine physicians are specialists who apply scientific knowledge and clinical expertise to the diagnosis, treatment, and compassionate care of adults across the spectrum from health to complex illness.