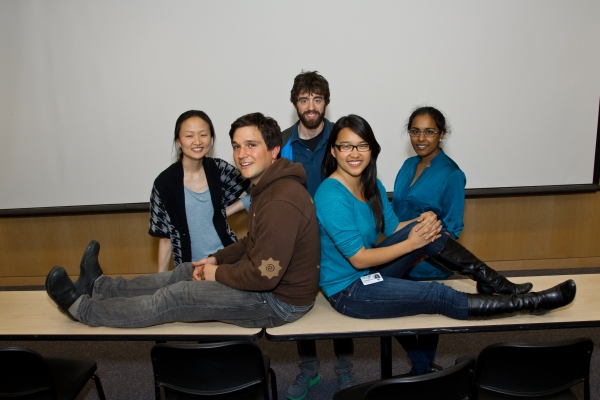 Students who formed a life sciences start-up called Spiria, as part of the "Idea to IPO" class, won the first-place prize of a $15,000 investment from Burrill & Company. Pictured rom left, are  Youngnam Lee, postdoctoral scholar; David Gorczyca and Joshua Bagley, both graduate students in the Yuh-Nung Jan Lab; Connie Cheung, a graduate student from the Chang Lab; and Anuradha Madhavan, a postdoctoral fellow in the Whistler Lab.

Few courses anywhere award $25,000 in prize money to those who finish at the top of their class.

However, UC San Francisco’s “Idea to IPO” course is not a typical course. Instead, it’s an opportunity for students to bring their dreams and learn how to turn them into reality.

“It’s very hands-on,” said Herman Singh Bagga, MD, a urology resident in his fifth year at UCSF. “It’s not just a lecture format. You’re participating in your own venture. It invests you more in the class, and when you’re invested you get more out of it.”

He led a five-member team that developed a monitoring device to prevent episodes of urinary incontinence by sensing when a bladder is full. Their project, “Bladder Sense,” tied for second place and received $5,000. 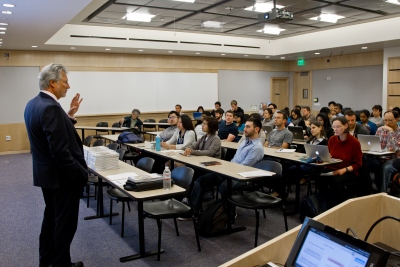 G. Steven Burrill, chief executive officer of Burrill & Company, a global life sciences investment firm based in San Francisco, talks to students in the "Idea to IPO" on the last day of class at Genentech Hall at UCSF Mission Bay. The course was run by the Entrepreneurship Center at UCSF, which is a division of the UCSF Office of Innovation, Technology & Alliances.

The two-hour class met twice a week for three months in Genentech Hall at UCSF Mission Bay. It was run by the Entrepreneurship Center at UCSF, which is a division of the UCSF Office of Innovation, Technology & Alliances (ITA).

Led by Assistant Vice Chancellor Erik Lium, PhD, ITA fosters collaborations with industry, provides resources on commercializing inventions and intellectual property and is the home for entrepreneurial activities. The Entrepreneurship Center at UCSF is headed by Stephanie Marrus, an industry veteran who joined UCSF a year ago with the goal of starting companies and raising the level of understanding about commercialization within the UCSF community.

“The center provides the knowledge, support and connections needed by scientists and clinicians to become entrepreneurs,” said Marrus. “We seek to create an innovation community and commercialize UCSF inventions through startup ventures.”

“Idea to IPO” relies on seasoned entrepreneurs, teachers and mentors to help students translate their concepts into products. The startups – all focused on health care and life sciences – address all areas of the industry – devices, diagnostics, therapeutics and digital health.

“We thought there must be a better way to build companies out of here instead of waiting for them to magically happen, ” Burrill said. “We’ve created about six a year. Many are still alive today.”

The 70 or so students in this year’s class were a mix of postdocs, PhD candidates, residents and faculty. They formed teams to focus on an idea, assess its market potential, create a business model and learn about clinical trials, financing, budgets, legal structures, regulatory requirements, intellectual property and operational basics. 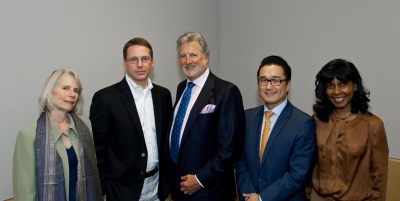 UCSF and industry leaders who collaborate on the popular “Idea to IPO” class are, from left, Stephanie Marrus, director of the Entrepreneurship Center, and Erik Lium, assistant vice chancellor, both with the UCSF Office of Innovation, Technology & Alliances; and Steve Burrill, CEO, Michael Keyoung, MD, PhD, managing director of the Pan-Asia/Korea Group, and Tania Fernandez, director of the India Group, all with the life sciences venture capital firm Burrill & Co.

Industry experts spoke at most classes, and a panel of investors listened to 10 pitches on April 1. The presenting teams were chosen from the 17 class teams as being the most investable.

“These were by far the best presentations we’ve ever had,” said Michael Keyoung, who manages Burrill’s Pan-Asia Equity Fund. Keyoung, together with Marrus and Tania Fernandez, a director at Burrill & Company, served as the teaching team.

The winning pitches were announced at the end of the last class on April 8.

The first-place $15,000 award went to the Spiria team. Team members say its approach to brain mapping, based on a grid of sensors, is faster and safer than current methods.

“This class was a great introduction to business,” said Anuradha Madhavan, another member of the Spiria team and a postdoc in neuroscience at UCSF. “You learn from people in the industry and listen to them firsthand. It helps to have that exposure.”

Second place was a tie between Bladder Sense and ChemoFilter, both of which received $5,000. The ChemoFilter team has invented a device to filter cancer therapeutics from blood during whole-organ perfusion, eliminating the systemic side effects of chemotherapy. Third place went to M3D, which searches patient data to provide clinical decision support, real-time analytics and research hypothesis generation.

Burrill said one reason the class has been successful is because of the students. “You have to teach these MDs and PhDs where they are,” he said. “And we brought people with $10 billion or $15 billion in venture capital into the room. Most scientists, by and large, wouldn’t know what a business is.”

Bagga, the 31-year-old team leader of Bladder Sense, is an exception. When he was only 17, living in Erie, Pa., he began running a branch of the family business. Even so, he found “Idea to IPO” to be an invaluable and eye-opening experience.

“I have a good business background, but it’s based in retail and imports and exports,” Bagga said. “It’s a more traditional form. But it’s very different in the sciences – the way you obtain funding, the way you protect your property, the way you deal with the university because you’re under their umbrella. So, the class was very helpful in providing all that information in a concentrated 12-week course.”