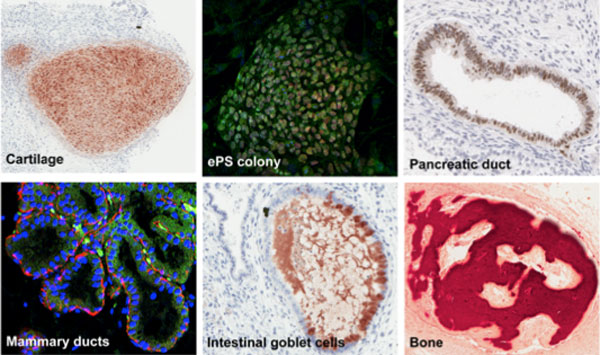 The top middle panel shows endogenous pluripotent somatic (ePS) cells, which can give rise to many tissue derivatives, including pancreas, bone, intestine, breast and cartilage cells.

UC San Francisco researchers have found that certain rare cells extracted from adult breast tissue can be instructed to become different types of cells – a discovery that could have important potential for regenerative medicine.

As with human embryonic stem cells, the newly found cells are pluripotent, or capable of turning into most cell types, the authors said. The scientists discovered that when the cells were put either in mice, or in cell culture, the cells could differentiate to produce multiple cell types, including those that proceed to make heart, intestine, brain, pancreas and even cartilage.

The finding is significant, the authors said, because scientists previously believed that pluripotent cells did not exist in the body after the embryonic stage of human development. 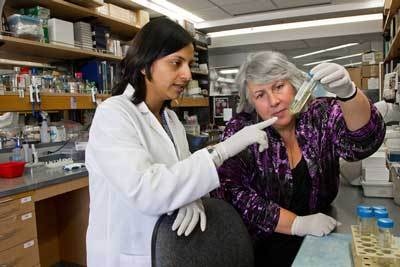 While a therapeutic use of the cells has yet to be determined, they could potentially generate new tissue – a “patch kit" – to heal wounds or reconstruct damaged or missing organs. They also could be used as a resource to study how cells become pluripotent, and how they repair and replace themselves.

“The ability of cells from an adult body to make so many tissue derivatives was completely unexpected,” said senior author Thea D. Tlsty, PhD, a UCSF professor of pathology. “When we saw that they could make cartilage, bone, gut, brain, pancreas cells – and even beating heart tissue – we were excited and intrigued.”

The study was published on March 4, in the online Early Edition of the Proceedings of the National Academy of Sciences (PNAS).

UCSF has pioneered research on regenerative medicine in a broad array of animal and human cell studies. Last year, Shinya Yamanaka, MD, PhD, a senior investigator at the UCSF-affiliated Gladstone Institutes and a UCSF professor of anatomy, won the Nobel Prize in Medicine for his discovery of a way to reprogram ordinary human skin cells into stem cells that can be used to better understand and treat a number of human diseases. Other projects at UCSF include work by Allan Basbaum, PhD, to modify stem cells to treat pain and rebuild damaged nervous systems.

Though the newly discovered cells share some characteristics of embryonic stem cells, they appear to be unique to themselves, said Tlsty. They are mortal and genetically stable – characteristics that are barriers to subsequent cancer formation, which is a factor that could prove valuable if the cells are to be used for regenerative medicine, she explained. By contrast, human embryonic stem cells as well as engineered induced pluripotent stem cells, also known as iPS cells, are immortal and genetically unstable.

When we saw that they could make cartilage, bone, gut, brain, pancreas cells – and even beating heart tissue – we were excited and intrigued.

Additionally, the cells can expand to an extensive yet finite number before they stop growing. One cell can grow for almost 60 population doublings, producing in excess of one billion daughter cells, conceptually providing enough cells to help in the recovery of damaged or diseased tissue.

The scientists are currently searching for the rare cells in other organs of the body. They hypothesize that these “universal patch kits” are scattered throughout the body of adult men and women.

The special cells were discovered and isolated in healthy breast tissue from women of various ages and ethnicities who were undergoing breast reductions. All tissues used in the study were devoid of visible disease or contamination, the authors say.

The breast tissue in the study was separated into single cells, and specific markers were used to pull out the rare population of cells.

Even a single one of these endogenous pluripotent somatic (ePS) cells, when placed in the appropriate conditions, exhibited the same pluripotent power to self-renew and to generate multiple lineages – both in vitro and in vivo – as embryonic stem cells. The cells could develop into any of the three germ layers: endoderm (such as the pancreas and gastrointestinal tract), the mesoderm (bone, heart muscle, blood vessel), or ectoderm (breast tissues and nervous system).

For example, when properly instructed, some ePS cells made human breast tissue that produced milk in transplanted mice, while other cells generated cartilage structures. To the surprise of the researchers, when the cells were differentiated into heart muscle, they even demonstrated the spontaneous beating seen in cardiomyocytes, or “beating heart” cells.

“The cells we describe here exist in the body devoid of commitment,” the authors wrote. “Taken together, these studies provide morphological, molecular and functional evidence of lineage plasticity of these cells. They will make human milk, bone, fat – they will beat like a heart.”

Only a small fraction of certain mammary cells have “this complete and sustained” unique profile capable of morphing themselves, the researchers said.

“Future research will tell us if we lose access to these cells as we age, if they are found in all tissues, and if they can be used to rescue diseased tissues,” said Tlsty.

“The observation that rare cells within an adult human body have the capacity to differentiate into many tissue types under different physiological cues will facilitate a fascinating area of research into the physiology and therapeutic potential of these cells,” said lead author Somdutta Roy, PhD, a postdoctoral fellow at the UCSF Department of Pathology and the UCSF Helen Diller Family Comprehensive Cancer Center.

The work was supported by National Cancer Institute Grants CA097214, CA107584, ES017154, and CA135626; the Avon Foundation, the Cancer League, Inc; and the California Institute for Regenerative Medicine.