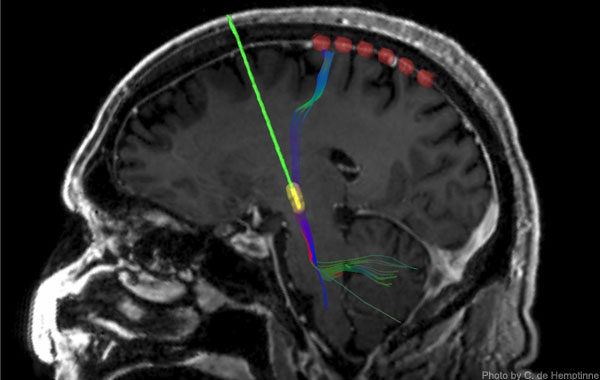 This CT image taken during surgery was superimposed on a preoperative MRI of one patient's brain. It shows a strip of detectors (red dots) used to record cortical activity and a deep-brain stimulation electrode (green cylinder with yellow tip). The multi-color traces represent the fibers connecting the two.

A team of scientists and clinicians at UC San Francisco has discovered how to detect abnormal brain rhythms associated with Parkinson’s by implanting electrodes within the brains of people with the disease.

The work may lead to developing the next generation of brain stimulation devices to alleviate symptoms for people with the disease. 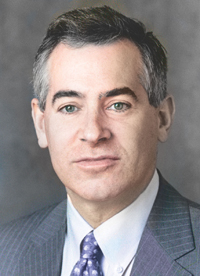 Described this week in the journal Proceedings of the National Academy of Sciences (PNAS), the work sheds light on how Parkinson’s disease affects the brain, and is the first time anyone has been able to measure a quantitative signal from the disease within the cerebral cortex – the outermost layers of the brain that helps govern memory, physical movement and consciousness.

“Normally the individual cells of the brain are functioning independently much of the time, working together only for specific tasks,” said neurosurgeon Philip Starr, MD, PhD, a professor of neurological surgery at UCSF and senior author of the paper. But in Parkinson’s disease, he said, many brain cells display “excessive synchronization,” firing together inappropriately most of the time.

“They are locked into playing the same note as everyone else without exploring their own music,” Starr explained. This excessive synchronization leads to movement problems and other symptoms characteristic of the disease.

The new work also shows how deep brain stimulation (DBS), which electrifies regions deeper in the brain, below the cortex, can affect the cortex, itself. This discovery may change how DBS is used to treat Parkinson’s and other neurologically based movement disorders, and it may help refine the technique for other types of treatment.

Over the last decade, doctors at UCSF and elsewhere have turned to deep brain stimulation to help people with Parkinson’s disease and movement disorders like essential tremor and primary dystonia, an extremely debilitating conditionthat causes painful, twisting muscle spasms.

In addition, deep brain stimulation is now being explored to treat psychiatric diseases like depression and obsessive-compulsive disorder. Last year, a team at UCLA showed that electrical stimulation of the temporal lobe in patients during learning activities helped them recall specific types of spatial information.

Similar to putting a pacemaker inside a heart patient’s chest, deep brain stimulation requires a neurosurgeon to implant electrodes inside tiny parts of the brain, to deliver electrical current.

In Parkinson’s, these electrodes are generally implanted in people who have mid-stage disease and cannot obtain full benefit from commonly used drugs due to complications – about 10- to 15-percent of all patients with the disease. For them, deep brain stimulation can free them of severe mobility problems and other symptoms, helping them live with much improved motor function for many years. Eventually the progressive nature of Parkinson’s disease overwhelms the ability of deep brain stimulation to alleviate symptoms.

However, while doctors have witnessed for years the sometimes miraculous recovery of function that can come with one of these surgeries, said Starr, the odd thing is that nobody understands exactly why deep brain stimulation works. The prevailing hypothesis is that it alleviates symptoms by overriding the abnormal, “bad” brain circuitry, much like turning down the noise can increase the fidelity of a musical recording.

The new work supports this hypothesis. Working with 16 patients with Parkinson’s disease and nine with cervical dystonia undergoing neurosurgical treatment over the past three years, Starr and his colleagues showed clearly how to detect excessive brain synchronization at the surface of the brain in people with Parkinson’s disease and how deep brain stimulation can return those surface cells to their independent state.

Patients in the study consented to have temporary, flexible electrodes placed on their brain surface for a few hours during surgery, in addition to having the permanent deep stimulating electrodes implanted for long-term therapy. 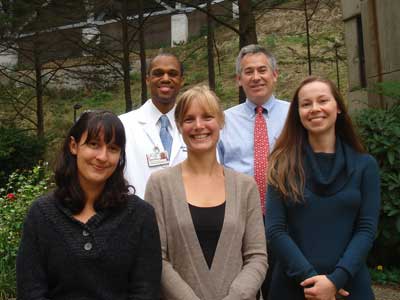 The first author on the study is Coralie de Hemptinne, PhD, a postdoctoral fellow in Starr’s laboratory. Patients were managed before and after surgery by study co-authors Jill Ostrem, MD, and Nicholas Galifianakis, MD, neurologists in the UCSF Surgical Movement Disorders (SMD) Center.

For controls, they compared the surface brain recordings of those 25 patients with nine more people who were undergoing surgery for epilepsy and did not have abnormal brain patterns while they were not having seizures.

The ability to monitor excessive brain synchronization on the surface of the brain points the way to next-generation brain stimulators that would be more sophisticated, Starr said. Right now most devices implanted into patients deliver continuous electrical stimulation. But modern heart pacemakers deliver jolts only when needed.

If DBS implants could be made to detect an abnormal signal in the surface of the brain and deliver their electrical stimulation only when needed, they might function better, require much less work from clinicians to adjust stimulator settings, and be able to automatically adjust stimulation levels to match changes in patient’s movement symptoms. Symptoms can often vary greatly throughout the day, but existing DBS devices have no way to adjust themselves for changing conditions in the patient’s brain.

The next step, said Starr, will be to find ways to detect these signals automatically with an implanted DBS device so that the electrical brain stimulator would respond automatically and flexibly to a patient’s needs.

This work was funded by the National Institutes of Health via grant #R01-NS069779.