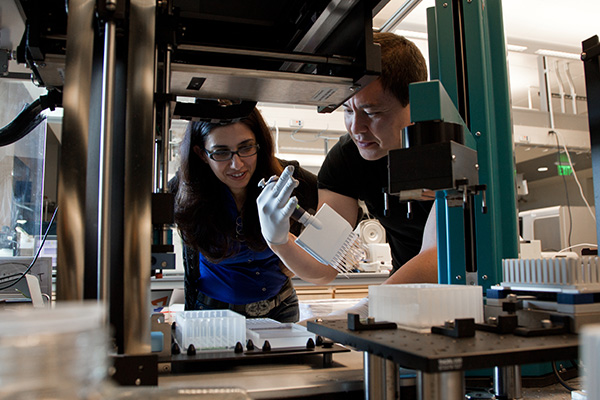 To explain her research into the workings of cells, UCSF scientist Hana El-Samad offers an analogy from the world of machines.

“Imagine a telephone or Internet network,” she says. “Despite their staggering complexity, packets of information find their destination on these networks and are interpreted correctly.” 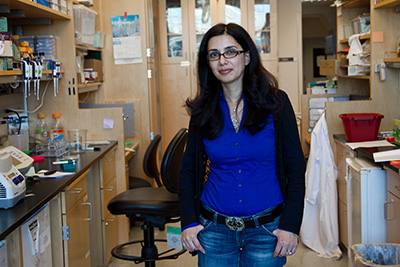 Hana El-Samad, PhD, assistant professor in Biochemistry and Biophysics, is the recipient of a $1.4 million grant from the Paul G. Allen Family Foundation for her novel research into the workings of cells.

El-Samad is trying to understand how each change is encoded in the cells, so that it sends the right information to the genes it’s targeting, and then she wants to understand how those genes are able to decode the message.

Her novel approach in this arena won her a $1.4 million grant in February from the Paul G. Allen Family Foundation. The grants are aimed at funding high-risk but potentially high-reward research that is not typically funded by traditional sources.

Taking a Bigger View of Biology

El-Samad’s phone network analogy makes perfect sense, considering her background. In 2005, she earned a PhD degree in mechanical engineering at UC Santa Barbara (UCSB), studying control theory and dynamical systems. She examined things like robots and automobile cruise control, and how they function when different variables come into play.

“Out of that, I started thinking about the architecture of systems that do work in challenging environments,” she says. “About halfway through my PhD, I started thinking: What other things could all these theories and mathematical tools be applied to?”

The answer became clear: biology. Thanks to the mapping of the human genome, and the proliferation of new and powerful tools, scientists were starting to take a bigger view of biology, and wondering, El-Samad says, “Do we really understand what’s going on?”

She was hooked. “This is where my journey to becoming a scientist rather than an engineer started,” she says.

She grew up in Lebanon, one of four girls. Her father was a retailer, and her mother was a math teacher. People in the U.S. often assume it’s unusual for a Lebanese girl to go into science, but she says it’s more common in Lebanon than the U.S. Her mother expected her daughters to achieve, and encouraged them to go into mathematics and engineering. One of her sisters is an engineer, another is a biologist and the oldest is a literature teacher.

El-Samad was enthralled with control theory, and came to the U.S. for graduate school, earning a master’s degree in electrical engineering at Iowa State University, where one of the leading authorities in the subject, Mustafa Khammash, PhD, was a professor. El-Samad followed Khammash to UCSB.

After earning her doctorate, she skipped the postdoctorate phase, and came to UCSF as a Sandler Fellow, a special program that brings exceptionally promising young scientists to UCSF for independent research. In just a few years, she has distinguished herself with many other grants and honors. She is a faculty member in the department of Biochemistry and Biophysics and the California Institute for Quantitative Biosciences (QB3), where she holds the Grace Boyer Junior Endowed Chair in Biophysics and is the deputy director of the UCSF Systems and Synthetic Biology Center. She is a 2009 Packard Fellow, a recipient of the 2011 Donald P. Eckman Award and the 2012 CSB2 prize in Systems Biology.

She is active in efforts to encourage more women to pursue scientific careers, serving on UCSF’s diversity committee. “I have these conversations all the time, where people say it’s nearly impossible to be a woman and a successful scientist,” El-Samad says. “I say, ‘Who told you this...?’ I take these issues to heart.”

Thriving in a Culture of Collaboration

El-Samad has thrived in UCSF’s culture of collaboration. Other universities have recruited her, but she stays at UCSF mostly due to the colleagues and the collaborative atmosphere. “You can walk into anyone’s office and say, ‘Can you help me?’ and the answer is always, ‘Sure!’” she says. “We just submitted a paper and almost everybody on the (Byers Hall) fourth floor is on it. Now we have to go to the third floor and do a paper!” 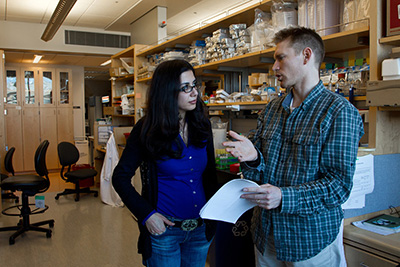 The buildings at Mission Bay were designed to foster collaboration. “You can have your necessary quiet creative space in your office, but the moment you step out, you bump into somebody,” she says. “If you look at our publications, they all have multiple authors.”

“That’s the new science,” she says. “Nobody can be an empire on their own. They’ll lose out.”

She once bumped into DeRisi, a Howard Hughes Investigator whose lab is down the hall from El-Samad’s.

“I was discussing something with a student. We needed to do one type of measurement. We needed to measure the absolute binding rate constant between a transcription factor and the different variations of its target binding motifs in a gene,” she says. “So I walked outside my office and I saw Joe. I said, ‘Joe, do you think we can do this?’ And he said, ‘I’m glad you asked! We just developed the technology to do just that.’

“The next day, he brought his student, who talked to my student, and three weeks later, we had the data. I could not have done this alone. It probably would have taken me a couple of years to figure it out.”

DeRisi was thrilled to see El-Samad use his lab’s technology to get such great results. “Her quantitative work on precisely how this stress response in yeast is regulated is beautiful,” he says. “I’m really happy our technology was able to play a part in assisting her nail down exactly what was going on. This is the kind of collaboration that UCSF is famous for.”

DeRisi says El-Samad is a “star in her field.”

“She takes a very analytical quantitative approach to biology, thinking more like the engineer or control theorist that she is,” he says. “It’s a refreshing perspective to these biological problems. It just happens that we have the tools that can assist her.”

Kathy Richmond, who manages the Allen Distinguished Investigators awards at the Paul G. Allen Family Foundation, came to visit El-Samad shortly after the grant was awarded. “We were all really impressed with her multidisciplinary approach to examining cellular decision making,” Richmond says. “We all want to see where these investigations may lead. She is trying to integrate computational modeling with high resolution, high throughput work. It’s ambitious, and you don’t often see it proposed, and it seemed like something she could really leverage to gain insight into this topic.”

El-Samad was one of five recipients of the Foundation grants, and Richmond says all were unanimously selected out of more than 40 proposals. Allen, a cofounder of Microsoft, was applying some principles from the world of technology to his support of science, Richmond says.

“When Mr. Allen started out looking at making progress toward answering some of these questions in science, he noted that many early stage projects struggled to find funding,” she says. “These are curious scientists who are tackling what no one else is. He decided to really focus on early stage research and ambitious innovative science that may seem too risky for traditional methods of funding. We won’t foster innovation if we play it safe.”

One can almost see the parallels in Allen’s roots in the software world, and El-Samad’s comparisons of biology and engineering. In her analogies, El-Samad says that scientists in recent decades have come to understand cellular networks – what she calls “the hardware.” “There’s the hardware, like the telephone line, and the software, which is the algorithm” that routes the phone calls, emails and text messages to their proper destination.

People needed to understand the hardware first, she says, enabling scientists like her to study the software. “Thirty or 40 years ago, we did not even know anything about cellular networks. The people who did this work discovered the list of components and how they’re connected together. Now that we have that, we can ask, ‘How do they work together?’ Which is a different question.”

That sort of basic science can serve as a building block for the translational science that has become so important today, which may ultimately help uncover the underpinning of diseases.

“One has to keep an open mind,” she says. “Our work is mostly basic science, but if there is a concept that could be applicable to fighting a disease, of course we’re going to go there. You just go wherever the science takes you, and that’s good science.”