Heidi Dohse has spent much of her adulthood monitoring a pacemaker implanted into her chest at the age of 19 to repair arrhythmias, or rapid irregular heartbeats.

For years, that’s meant that Dohse, 49, has had to fly several times a year from her New York home to California for check-ups with the medical team at UC San Francisco that performed the life-saving procedure to correct her heart rhythms when she was a teenager.

Those time-consuming trips are no longer as necessary since she’s enrolled in an ambitious UCSF-developed online cardiovascular study that harnesses the power of mobile technology to monitor patients using their smartphones and send the information to doctors who can analyze the data and provide instant feedback.

“Because I live in New York and my UCSF doctors are here in San Francisco, I can use all these mobile devices and tools to feel like I’m still a patient of theirs,” Dohse said. “It’s one of the reasons my staying with UCSF makes sense.”

Through the Health eHeart Study, which launched Tuesday, physicians hope to better understand how the heart functions and to develop new ways to predict and prevent cardiovascular disease. The study – funded by the Salesforce.com Foundation – aims to enroll 1 million people from around the world.

A major goal of the Health eHeart Study is to make health care delivery more precise.

The study allows participants to submit data via a secure online survey and uses smartphone technology to measure a participant’s heart rate, blood pressure and pulse rate. The information is sent back to researchers, who can make recommendations to help prevent or treat heart disease. 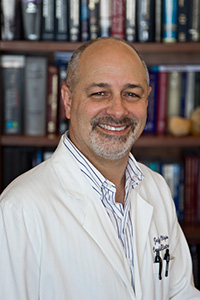 The concept of precision medicine – which emerged from a 2010 National Academy of Sciences report co-authored by UCSF Chancellor Susan Desmond-Hellmann, MD, MPH, and Charles Sawyers, MD, of Memorial Sloan-Kettering Cancer Center – is to transform medical care worldwide by integrating the wealth of data emerging from both the human genome and research on the molecular basis of disease, with information from patients’ health records and environmental data. It has become a driving vision for UCSF, which is convening a summit in May to create a roadmap for precision medicine nationwide.

“With this platform, we hope to be able to diagnose and treat heart patients more rapidly than is currently done with traditional research, since we’ll have a large patient population,” Olgin said. “And because these patients are connected to us electronically and through their smartphones, we can deploy the study very quickly.”

Heart disease is the leading cause of death in America for men and women, killing approximately 600,000 people, more than all types of cancer and AIDS combined, according to the Centers for Disease Control and Prevention. One in three adults – or 82 million Americans – have heart disease, and every minute a person dies of a heart attack. Coronary heart disease alone costs the United States $108.9 billion each year in health services, medications and lost productivity.

“Most people aren’t aware that one out of four deaths in America is due to heart disease,” Olgin said. “And a third of people who have cardiovascular disease aren’t even aware of their risks. That’s why the ‘Health eHeart Study’ is so important.”

To say that Dohse enjoyed sports as a child would be an understatement: She began swimming at the age of 6. Her youth was filled with soccer, tennis, cross country, track and snow skiing. In her 20s, she became a professional windsurfer, traveling the world competing in events. 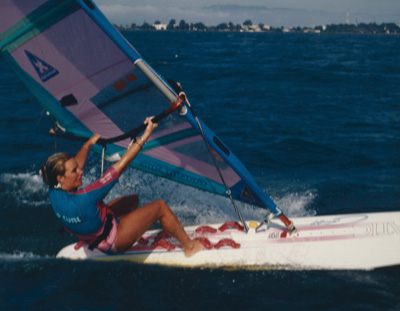 Heidi Dohse participated in a windsurfing competition in Maui while in her 20s. Photo courtesy of Dohse

“Both my sister and brother played sports, and our parents were very much involved in our sports,” she said. “I honestly wanted to be a little princess and take ballet, but I ended up playing sports instead, which it turns out, saved my life.”

Dohse learned about her arrhythmia at the age of 18 when she got her first EKG at the doctor’s office while getting some cartilage fragments removed from her knee.

To correct her severe heart condition, she underwent one of the first procedures at UCSF to restore normal heart rhythms called AV (atrioventricular) node ablation, which modifies the electrical pathway that connects the top chambers of the heart to its bottom chambers. Doctors also implanted a pacemaker, a small device placed in the chest that uses electrical pulses to help the heart beat at a normal rate.

Her condition has stopped her from staying active, and the instant feedback from the Health eHeart Study helps keep Dohse within a safe range whenever she goes on a grueling training ride.

“That’s one of the hardest thing to do as a heart patient is wonder what’s going on? What’s happening in there? Is it a flutter I need to worry about? Is it an episode? Or did I just imagine that?” said Dohse, who uses a Boston Scientific heart rate monitor that does not have a chest strap, and an AliveCor iPhone case that allows her to take EKGs from her smartphone. 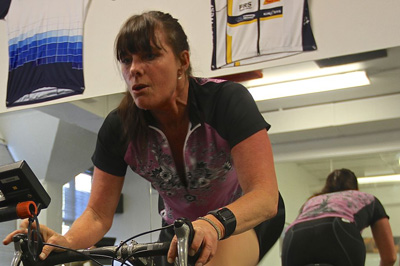 Heidi Dohse trains on a stationary bike at a San Francisco gym while wearing a mobile heart monitor on her wrist. Photo by Leland Kim

“Now with this study, not only are they collecting my data, they’re also collecting data of people like me, that will create specific heart plans for me now,” she added. “And this is going to help guide treatments as I get older, as I go through different phases of my heart care, so I’m really excited about participating and adding my data to the pool, but also learning and taking advantage of what’s learned from everybody else.”

The apps and certain study-related devices are free to participants. Olgin and his team plan to analyze the data to identify patterns. This will allow them to not only identify “population-based” predictors, but also to identify deviations from baselines.

The Health eHeart Study expands on the Framingham Heart Study, which tracked 5,209 men and women in Framingham, Mass., starting in 1948.

The study, under the direction of the National Heart, Lung and Blood Institute, tracked three generations of participants between the ages of 30 and 62. Some had symptoms of cardiovascular disease; others did not.

The Framingham Heart Study established research milestones by finding that:

“The Framingham model tracked participants in one city,” Olgin said. “Imagine that model on a global scale and taking the collected data to treat heart patients so precisely that we can account for their gender, age, ethnicity and lifestyle factors.”

Olgin is the lead researcher of this study; co-researchers include Gregory Marcus, MD, of the UCSF Division of Cardiology; and Mark J. Pletcher, MD, MPH, of the UCSF Department of Epidemiology & Biostatistics.

Staying Connected to Doctors Through Technology

By 2016, the number of smartphone users is expected to more than double.

Globally, more than 6 billion people use mobile phones, or about 87 percent of the world population, and there is at least one cellphone subscription per person in the developed world, according to a report by the International Telecommunication Union. 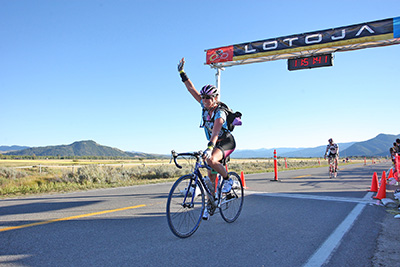 Because of the growth in mobile technology, Dohse can now accurately monitor her heart with mobile technology in real time and make sure she stays in a safe range whenever she goes on a 206-mile single-day bike race through three states and three mountain passes.

“I learned at a very young age to appreciate every single day, and I don’t think it’s a gift everyone is given,” Dohse said. “The doctors at UCSF and this new study allow me to have an amazing life versus having an OK life being a victim on the couch.”