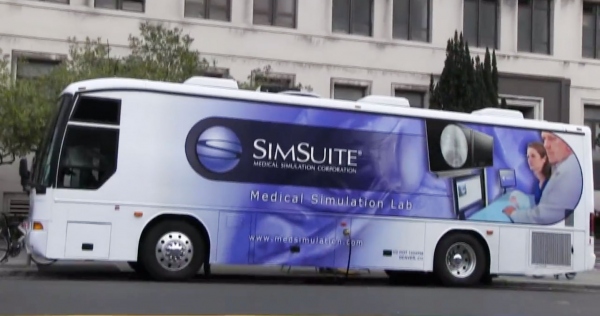 Inside a bus outside the UCSF Medical Center, clinicians underwent training exercises to better spot signs of sepsis in patients as early as possible.

A large bus parked outside the UCSF Medical Center last fall only had one passenger: a mannequin that talked, breathed and was showing signs of sepsis, a serious bloodstream infection that can rapidly become life-threatening.

Teams of UCSF clinicians each took shifts with the ailing mannequin as part of a Bay Area initiative to improve the ability to identify and treat sepsis patients as early as possible.

Clinicians trained with a mannequin that talked, breathed and

Every minute can make a difference in whether a patient with sepsis survives, and the incidence of septicemia, or sepsis, is climbing as people live longer. According to the Centers for Disease Control and Prevention, the hospitalization rate of people with a principal diagnosis of sepsis more than doubled from 2000 through 2008, increasing from 11.6 per 10,000 people to 24 per 10,000.

Reasons for the increases may include an aging population with more chronic illnesses; greater use of invasive procedures, the use of immunosuppressive drugs, chemotherapy, organ transplantation; and increasing microbial resistance to antibiotics.

For hospitals like UCSF Medical Center, sepsis is especially important because the hospital treats a large number of highly complex patients with cancer, organ transplants and others who have weakened immune systems.

Over the last 10 years, UCSF has had a dramatic reduction in patient deaths from sepsis. From 2003 to 2011, UCSF has seen a 36-percent reduction in its sepsis mortality. The gains are the result of concentrated efforts including improved ventilator management, increased antibiotic use, keeping patients’ blood pressure steady and reducing possible complications, such as gastrointestinal bleeding and skin injuries that can result from staying in an intensive care unit.

Even better news: A new sepsis program, launched in 2012, has enabled UCSF to achieve a further reduction in sepsis mortality with a 21-percent relative reduction since 2011.

More recent results are related to rapid recognition of early sepsis and early initiation of appropriate treatment. The success doesn’t involve sophisticated technology but rather making a difference through basics like communication, better awareness and earlier treatment of symptoms.

The simulation bus, part of a collaborative effort to improve patient safety in California, was one more way UCSF is training its clinicians. Multidisciplinary teams of UCSF physician, nurses, pharmacists, respiratory therapists, phlebotomists and others participated in three-hour sessions using simulated sepsis scenarios designed by Patient Safety First, a groundbreaking, three-year, $6 million collaboration launched in 2010 and aimed at improving quality of care, reduce health care costs and ultimately save lives by improving patient safety and perinatal care throughout the state.

The use of a simulation bus is a novel and highly effective method to rapidly diffuse education and hands-on training to hospitals throughout Northern California. More than 825 health care professionals from 48 participating hospitals have received this specialized training to increase awareness and recognition of the early signs of sepsis.