UCSF’s Philip R. Lee Institute for Health Policy Studies honored its 40th anniversary with a milestone celebration at San Francisco City Hall that reflected on its roots, extolled its accomplishments, and envisioned a robust future.

“How fitting that we come together in this beautiful and historic building – the building where [founding director] Phil Lee served as the first president of San Francisco’s Health Commission under Mayor Dianne Feinstein,” said Claire Brindis, DrPH, director of the Institute for Health Policy Studies (IHPS). “I thank Phil Lee and Lew Butler (founding associate director) for being dissatisfied with the status quo and for being revolutionary and bold in your creation of the institute 40 years ago.” 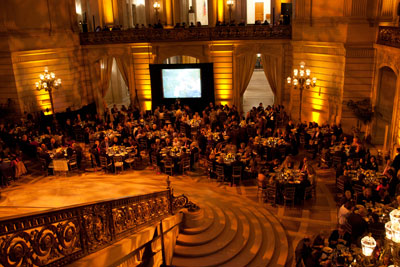 The IHPS was established as UCSF’s first multidisciplinary health policy and health services research group with a number of lofty goals, not the least of which were to: assure access to care, eliminate health disparities, reduce health care costs, expand the capacity and distribution of the current and future health care workforce, evaluate health care policies and practices, and translate research findings for policy makers, stakeholders and the public.

Their vision is as compelling now as it had been in 1972, said Brindis, a professor of pediatrics and health policy who is also co-founder and a director of UCSF’s Bixby Center for Global Reproductive Health.

“The same themes that shaped our 40 years of history continue to have great importance in the current health policy environment, particularly in light of the implementation of the Affordable Care Act,” she said. “Traditional health systems are undergoing transformational changes in health care delivery and financing. Purchasers, providers, consumers, and other stakeholders are calling for better outcomes and reduced costs. Consumers are mobilizing in their well-justified call for patient-centered care and shared decision-making with providers.”

And even though the institute has turned 40, there is clearly no mid-life crisis. What emerged at the 40th anniversary gathering of about 450 people on Feb. 27 was a sense of pride and purpose – reinforced by UCSF’s record of excellence in shaping health policy on a local, national and international level.

“Celebrating the institute’s anniversary – and the many ways that UCSF’s advancement of health policy has improved health outcomes locally and globally – strengthens our resolve to make our vision of high-value health systems worldwide a reality,” said UCSF Chancellor Susan Desmond-Hellmann, MD, MPH, who described the institute as an incubator, innovator, and engine for change.

In a video introducing the evening, more than 20 people with current or past ties to the institute described it as a very inclusive and collaborative place that opened up their worlds and did cutting-edge work far ahead of its time – in keeping with its four-fold mission of research, education and training, technical assistance, and public service.

The institute was “doing translational research before that word was even defined within the research lexicon,” said UCSF sociologist Howard Pinderhughes, PhD, in the video.

Hal Luft, PhD, who succeeded Lee and preceded Brindis as IHPS director, provided historical context in the video. He said the IHPS was at first deeply connected to Washington. The second generation behaved more like classical researchers. Later, closer connections emerged among researchers, generators of data, and the people who could actually use their findings or had problems of various sorts that required a strong evidence-based response.

Much of the evening was grounded in the present and future. Keynote speaker Dr. Atul Gawande, a Harvard surgeon, writer, and health policy superstar, said, “Among the great tasks of our generation is making systems work in health care and public health.”

“I think this is our time,” Gawande said. “… You are the group that I’m really happy to be part of that will change health care.”

Among those in the forefront of change are three rising stars at UCSF who were asked by moderator Susan Dentzer, editor-in-chief of Health Affairs and a member of IHPS’ national advisory board, to discuss the ways in which Gawande’s talk had resonated with them.

“I was really struck by this idea that we need to work as teams and really understand the voices of the different stakeholder groups,” said  Anisha Patel, MD, MSPH, an assistant professor in general pediatrics at UCSF whose research focuses on childhood obesity. She added that it is crucial to work with youth and their parents to grasp what actually succeeds in their communities.

Jinoos Yazdany, MD, MPH, an assistant professor of medicine at UCSF and director of the San Francisco General Hospital Lupus Clinic, said Gawande’s perspective “represents the aspirational goals of my generation of physicians.” 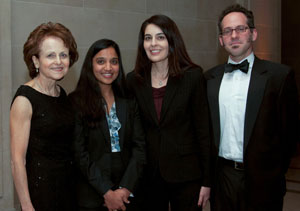 From left, Claire Brindis, director of the Philip R. Lee Institute for Health Policy Studies at UCSF, stands with rising stars Anisha Patel, Jinoos Yazdany and Christopher Koenig at the 40th anniversary celebration of the institute.

Christopher Koenig, PhD, a research sociologist at UCSF and the San Francisco Veterans Affairs Medical Center, concentrates on health communication related to the social, organizational and cultural contexts of health care delivery. He said he was struck by the importance of “systematically coordinating how things work together both quantitatively and qualitatively.”

At the end of the evening, Brindis announced that IHPS had launched its disruptive innovation fund with an initial $150,000. It was a fitting conclusion to “UCSF Philip R. Lee Institute for Health Policy Studies Day in the City and County of San Francisco,” declared in a proclamation by the city’s Board of Supervisors.

“I hope you will join me,” Brindis said, “to make a re-commitment to the mission of social justice and equity that drives our shared passion for improving health prevention and promotion, and high-quality and safe health care for all.”