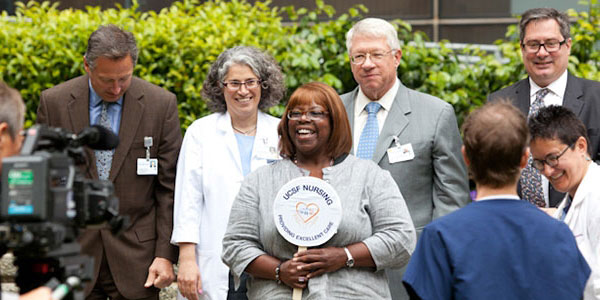 Last fall, UCSF Medical Center and UCSF Benioff Children’s Hospital achieved Magnet® recognition from the American Nurses Credentialing Center (ANCC), a status that has elicited enormous pride throughout the organization from frontline nursing staff to the top leadership in the medical center, UCSF School of Nursing and beyond.

What is Magnet status?

In 1983, the American Academy of Nursing Task Force on Nursing Practice in Hospitals conducted a study to examine the issue of recruitment and retention in nursing. Out of 163 institutions examined, they identified 41 that “attract” highly qualified nurses, and the concept of “magnet” was born.

And why not? Magnet recognition signifies outstanding nursing practice, a rewarding work environment for nurses and improvements in patient care, safety and satisfaction. Currently, less than 7 percent of the 5,724 hospitals registered with the American Hospital Association had achieved Magnet status.

“At two in the morning in the hospital, you want to know you have nursing staff that feels completely capable of making the best possible clinical decisions,” says Karen Drenkard, executive director of the ANCC and a former chief nursing officer at a Magnet hospital. “Magnet recognition helps give you that assurance, because it is a very high, evidence-based bar.”

But for those outside of the process, what constitutes that evidence-based bar can be a little mysterious. Most know little about the standards that Magnet organizations meet and less about how meeting them translates into improvements in patient care.

That was true even for some at UCSF when what everyone involved refers to as “the Magnet journey” began.

The Journey to Magnet Status

“I think the first Magnet discussion I had with nursing leadership dates back to 2000,” says UCSF Medical Center CEO Mark Laret. “There were some number of hospitals that had achieved Magnet, but at the time, it just wasn’t an institutional priority here.”

By 2005, a UCSF team did put together a Magnet application, but much to a proud institution’s shock, the application was denied.

“That was a watershed moment, because there’s always this fine line between being confident and overconfident,” says Laret. “I worried maybe we were overconfident in where we were relative to having accomplished the goals Magnet sets out, so when we hired Sheila [Antrum] to become Chief Nursing Officer [in 2007], we talked about what it would take to achieve Magnet status.”

By then, the Magnet process had evolved. “Before it was more around anecdotal stories and aggregate data to meet the criteria, but…now you have to demonstrate – by unit and top to bottom – that you’re meeting nursing-sensitive benchmarks of quality and satisfaction,” says Antrum.

“We enhanced the structures and processes that we had in place to demonstrate our outcomes,” says Jody Mechanic, director of Professional Nursing Practice and Magnet Program director.

That process began in earnest in 2010, and Antrum believes the collecting of baseline data in and of itself helped demonstrate one value of Magnet: heightened awareness of the need for evidence throughout the hospital and especially among an already outstanding group of nurses who may not have understood just how outstanding they were. 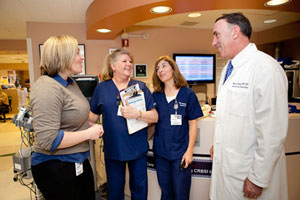 “At UCSF, we don’t rest on our laurels and can even be a little self-flagellating,” says UCSF Medical Center Chief Nurse Researcher Daphne Stannard. “Experts tend to not think of themselves as experts – how can I be an expert if I’m always learning? Our nursing staff epitomizes that, and some didn’t feel we were Magnet worthy.”

Over the next two years – working with Stannard, medical center staff, and faculty from UCSF School of Nursing – Antrum and Mechanic led a team that gathered the baseline data, identified gaps and planned and implemented improvements. They compiled a 3,000-page application that painstakingly documents how the two hospitals, ambulatory care services and home care were meeting Magnet benchmarks – and then the entire enterprise underwent a five-day site visit by Magnet appraisers.

Read the full story on the UCSF School of Nursing's Science of Caring website.