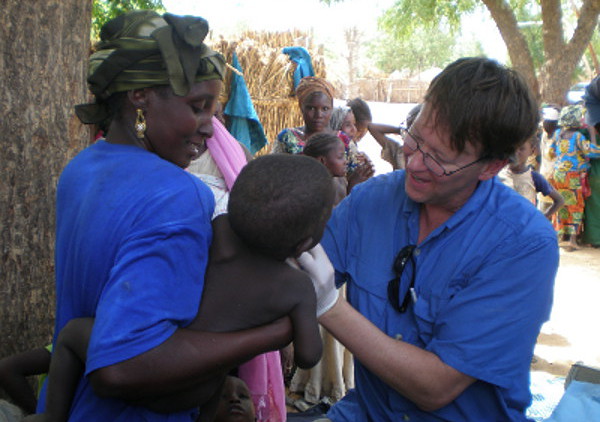 Thomas Lietman, MD, treats a young boy in Matameye, Niger, in 2012. Lietman is leading a team that's received $12 million for a multi-year trial to study the effectiveness of the antibiotic azithromycin in reducing childhood mortality in Niger, Tanzania and Malawi.

Two UCSF teams have received a total of $16 million from the Bill & Melinda Gates Foundation to study new ways to significantly reduce childhood mortality and disease in developing nations. 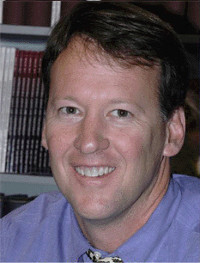 An international team led by Thomas M. Lietman, MD, associate director of the UCSF Francis I. Proctor Foundation for Research in Ophthalmology, received $12 million for a multi-year trial to study the effectiveness of mass oral administration of the antibiotic azithromycin in reducing childhood mortality in Niger, Tanzania and Malawi – three nations with severe childhood mortality rates.

A second team, led by James H. McKerrow, MD, PhD, professor of pathology and pharmaceutical chemistry, received $4.3 million to identify and develop a drug that kills the parasitic roundworms known as filiariae that cause river blindness, the leading cause of blindness in parts of West Africa. 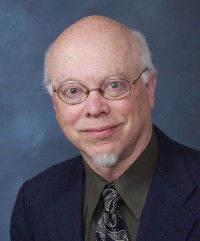 If successfully developed, the same drug will have a high probability of killing the closely related parasite that causes lymphatic filariasis, or elephantiasis, a crippling and disfiguring disease that affects millions of people in Africa, Asia, the Indian subcontinent and South America.

Lietman’s project is based on an earlier study in which communities in Ethiopia that received mass doses of azithromycin to treat trachoma – a strain of chlamydia that causes blindness – experienced an overall reduction in childhood mortality from all causes.

“Now we need to see whether that effect can be replicated in areas that don’t have a lot of trachoma,” said Lietman, a UCSF professor in the departments of Ophthalmology and Epidemiology & Biostatistics. “If we want to make a public health difference, we have to show that we can reduce childhood mortality in areas that are not otherwise receiving mass antibiotics.”

Community-wide antibiotic administration is common in African nations where trachoma is usually found, he said.

Preschool children in Lietman’s study will be randomized to receive either a cherry-flavored oral suspension of azithromycin or a placebo every six months for two years. If there is a significant reduction in mortality in the communities that receive the antibiotic, the study will be extended for another two years and all communities will receive antibiotics.

Lietman and his team will closely monitor for development of antibiotic resistant diseases in the communities treated with azithromycin. “It’s a complicated question,” he said. “We think we will select for antibiotic resistance. However, many of us believe that might be a price worth paying if there is truly a reduction in childhood mortality.”

Lietman noted two mitigating factors with regard to antibiotic resistance. In communities treated with azithromycin for trachoma, resistance to the antibiotic gradually disappears over the two years after such treatments stop. In addition, he said, azithromycin belongs to a class of antibiotic that is rarely used in sub-Saharan Africa, so even if an infection is resistant to azithromycin, it could still be treatable by one of six other classes of antibiotics.

The goal of McKerrow’s study is to find a drug that kills the adult form of the parasitic filarial worm, which is spread by a fly that breeds near fast-flowing rivers.

When the fly bites, it deposits larvae under the skin that grow into worms several inches long. The parasite associated with river blindness attacks the eye, while its relative that is responsible for lymphatic filariasis blocks the lymphatic channels in the groin, resulting in extreme swelling of the lower extremities.

McKerrow’s research group will employ new software developed by UCSF research specialist Chris Marcellino that significantly speeds the screening of potential compounds. Conventional drug screening technology uses plates with many hollows, or wells, each of which contains a candidate compound that is screened individually for promising activity. The new software allows an entire plate to be scanned for results in seconds. Scanning and evaluating a whole plate rather than individual wells is necessary, McKerrow explained, because of the large size of the worms, which restrict each plate to dozens rather than hundreds of wells.

“With conventional, well-by-well scanning, it would take a long time to screen many compounds,” said McKerrow. “But if you can scan a whole plate and then move on to the next plate in a few seconds, you can filter through thousands of compounds much more efficiently.”

The compounds will come from two sources. The first is what McKerrow calls traditional drug discovery, which starts from chemicals that aren’t yet drugs. That research will take advantage of unique chemistry developed by Bay Area biotech company Anacor Pharmaceuticals. The second source is “repurposed drugs” that have already been approved by the FDA for human use. Working in collaboration with the UCSF Small Molecule Discovery Center, McKerrow’s group expects to create a library of approximately 1,700 FDA-approved drugs that can be used in this and similar screens.

Based on earlier research, the team already has identified a promising possibility: auranofin, a drug used for decades to treat rheumatoid arthritis, which has proven effective in animal models of filariasis. McKerrow said he expects to have one or two clinical candidates – drugs that are ready for final FDA testing and potential approval – in three years.

Lietman’s project will be administered by the Proctor Foundation and conducted in partnership with the Carter Center in Niger, Johns Hopkins University in Tanzania and the London School of Hygiene and Tropical Medicine in Malawi, as well as with Ministries of Health in the three countries. The group from UCSF includes Nicole Stoller, MPH; Sun Yu, MPH; Jeremy Keenan, MD, MPH; Travis Porco, PhD, MPH; Bruce Gaynor, MD; George Rutherford, MD; and Phil Rosenthal, MD.

The McKerrow research group is based at the UCSF Center for Discovery and Innovation in Parasitic Diseases, a consortium affiliated with Global Health Sciences and QB3 at UCSF. The group includes specialist Judy Sakanari, PhD; assistant professor of pathology Larissa Podust, PhD; postdoctoral fellow Alberto A. Rascon, Jr., PhD; and technical staff Brian Suzuki, Christina Bulman, K.C. Lim, Petrea Kells and Chelsea Bidlow. Aside from the UCSF Small Molecule Discovery Center, the CDIPD team is closely aligned with the research team at Anacor Pharmaceuticals, Sara Lustigman, PhD, of the New York Blood Center and Fidelis Cho-Ngwa, PhD, of the University of Buea, Cameroon.