Suitulaga “Sugi” Hunkin has been overweight most of his life. He attributes that to his love of food and his Samoan ancestry.

Because of his size, he also had trouble breathing and experienced irregular heartbeat – symptoms his doctors diagnosed as heart disease called cardiomyopathy, which usually leads to heart failure. 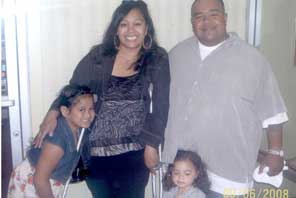 Sugi Hunkin says his weight ballooned to more than 350 pounds by his mid-20s because of poor diet and lack of exercise.

He needed heart transplantation surgery to replace his failing heart, but before that could happen, he needed to lose at least 100 pounds.

“If a patient is very obese, he bears a lot of risks and complications, inter-operatively as well as post-operatively,” said Georg Wieselthaler, MD, professor of surgery of UC San Francisco’s Division of Adult Cardiothoracic Surgery, and director and surgical chief of the UCSF Cardiac Transplantation and Mechanical Circulatory Support. “And therefore it's absolutely favorable for patients to try and have a body mass index of below 35 before going into a complex operation.”

A New Beginning with a New Heart

Hunkin completely changed his lifestyle. He began walking everywhere, he began using stairs instead of elevators and he changed what he put into his body.

“When I was hungry, I wanted a big steak dinner but I realized I don't need it,” Hunkin said. “All I needed was a sandwich, an apple and a glass of water.” 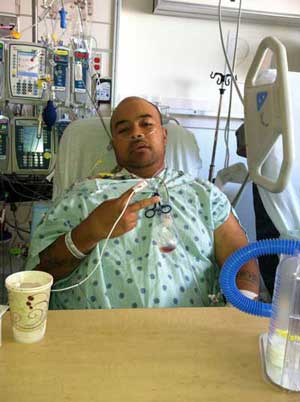 Sugi Hunkin moments after his life-saving heart transplant surgery at UCSF in August 2012.

“It got to the point where I wasn't waiting to eat every day,” Hunkin said. “I wasn't living to eat now but just eating to live.”

The dramatic changes worked. In just over a year, Hunkin lost 100 pounds, allowing his doctors at UCSF to replace his failing heart with a donor organ in August 2012.

“I'm only five months out, but the reason I'm recovering so fast is the weight loss,” he said. “Your recovery time and your recovery status is much better, if you lose the weight.”

Hunkin’s heart is doing well, and he has continued to maintain his healthy lifestyle.

“I'm blessed. My faith is stronger because I got a second chance at life,” he said. “And I'm just grateful – grateful to my donor's family, grateful to the doctors, grateful to the Lord and Jesus up above. Everything is really good. Life is what you make out of it.”