UCSF ranks second in the annual ranking of world universities in clinical medicine and pharmacy by the Academic Ranking of World Universities (ARWU).

The ARWU was first published in June 2003 by the Center for World-Class Universities of Shanghai Jiao Tong University, which has been focusing on the study of world-class universities for many years.

ARWU uses objective indicators to rank the world’s best universities, including the number of faculty winning Nobel Prizes, the number of articles published in journals of Nature and Science and per capita performance with respect to the size of an institution. 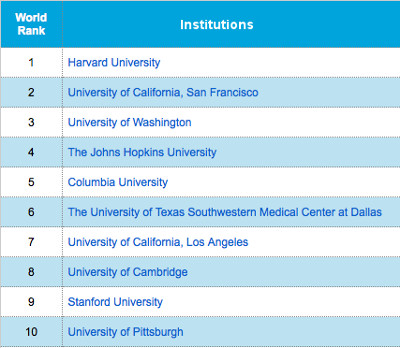 Academic Ranking of World Universities in Clinical Medicine and Pharmacy, 2012

More than 1,000 universities are actually ranked by ARWU every year and the best 500 are published on the web.

All but one of the world’s top universities are located in the United States. The University of Cambridge in the United Kingdom was ranked eighth, according to the ARWU survey. UCSF’s sister campus, UCLA, was ranked in seventh place.

Five faculty at UCSF are recipients of the Nobel Prize in Physiology or Medicine: