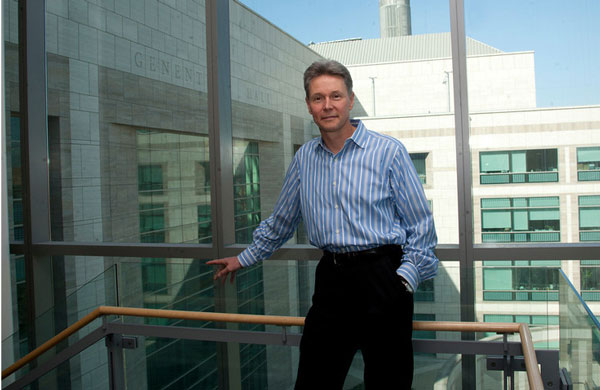 Charles Craik, PhD, the first UCSF scientist to move into the Mission Bay campus, poses at Genentech Hall in 2011.

With UCSF Mission Bay gleaming brighter every day, it’s easy to forget a time when some UCSF researchers did not want to leave the hive of activity on the Parnassus Heights campus for entirely new labs across town in a once-forsaken neighborhood.

In January 2003, Charles Craik, PhD – then one of UCSF’s youngest faculty members after training in the lab of William Rutter, PhD, the former head of the UCSF Department of Biochemistry and Biophysics and founder of Chiron Corp – became the very first to move to Mission Bay. The decision to depart the flagship campus came mostly out of necessity.

Because Craik had so little space on the overcrowded Parnassus campus for his research, students and postdoctoral fellows, he had been using a janitor’s closet as an office to provide more space in the lab.

“I came to UCSF because of the potential to do research that had relevance to human health,” Craik said, “so being close to the hospital [at Parnassus] was important. But programs were being choked, because they could not grow.”

Craik’s new digs were on the top floor of the 435,000-square-foot Genentech Hall, the first Mission Bay campus research building.

“It was pretty lonely at first,” Craik said. “But it was exciting to know that we had the space to expand our research programs.”

In a building explicitly designed to foster collaboration, with labs arranged in 14 neighborhoods containing both open and closed labs, offices, and library, lounge and lunch areas, Craik soon had many colleagues to keep him company.

Today Craik is a professor and senior scientist, part of a vibrant Mission Bay research community led by hundreds of principal investigators, including all three UCSF Nobel laureates that remain on the faculty – trailblazers recognized for seminal discoveries who have laid the groundwork for the emergence of new research fields.

This thriving research community also includes all five of the most recent UCSF recipients of the prestigious National Institutes of Health Director’s New Innovator Award – junior faculty members who are thinking outside the box to better understand and treat disease. 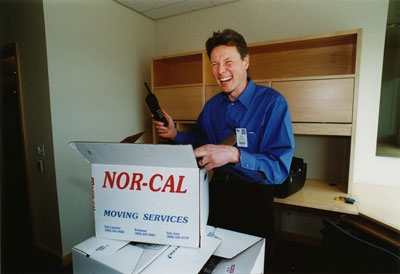 New, young faculty members are continually coming aboard. In every research building, each principal scientific investigator works with several postdoctoral fellows, graduate students and technicians, and a visitor can’t tell where one lab ends and another begins. Scientific ideas and camaraderie are nurtured in the interactive environment.

The proximity to clinical colleagues that Craik and many others value is increasingly available at Mission Bay. Several clinics are located there already, and just across 16th Street, UCSF is completing construction of hospitals focused on pediatrics, cancer and women’s health needs – the first new medical center to be built in San Francisco in three decades.

Like the prototypical UCSF scientist, Craik not only generates original ideas and experiments, but also often seeks out collaborators to move research forward more rapidly.

Colleagues esteem Craik as a leading expert on proteases, enzymes used by living organisms and the cells within them to complete many everyday physiological tasks. Proteases help by cutting up other proteins. These enzymes have become popular targets for drug development to combat diseases ranging from parasitic infection to cancer.

While numerous drugs that block protease action are on the market thus far, many more are in the pipeline. In his earlier work, Craik demonstrated how species differences in proteases could be used to safely target the AIDS virus, herpes viruses and parasites, for example, without wiping out human proteases. He and other researchers now are exploring ways to make proteases more targetable.

In recent years, Craik has deepened his explorations of proteases in cancer. As cancer cells evolve, they begin to abnormally produce proteases, a change which helps them to spread to places within the body that are distant from the original tumor’s site of origin – a process called metastasis. Some of these proteases can be used as early warning signals of an often lethal disease.

Through research collaborations with colleagues who have complementary expertise, Craik is exploring ways to non-invasively detect abnormal proteases and metastasis and developing more powerful antibodies that might be used to target proteases in cancer treatment. 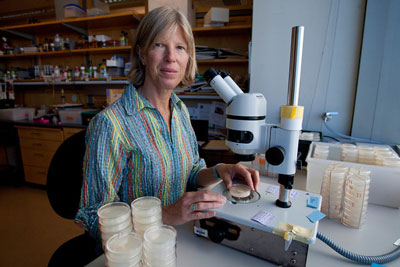 Cynthia Kenyon, PhD, also among the earliest transplants to Genentech Hall, is renowned for her pioneering studies in the tiny nematode worm, C. elegans, which demonstrated that there are genes that affect lifespan.

Kenyon continues to explore how patterns of gene activity – often influenced by changes in the surrounding environment – can influence lifespan. Most recently she has begun working with human cells grown in the lab.

“We’re trying to find small molecules that will act on biochemical pathways in humans to slow aging and keep us healthy,” she explained.

Although Kenyon conducted the initial breakthrough experiments on the Parnassus campus, her move to Mission Bay has fostered new collaborations and idea sharing and allowed her to expand the scope of her research. 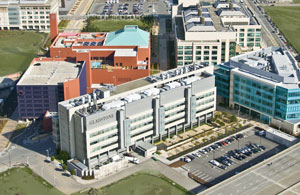 The Gladstone Institutes moved into its new facility at the Mission Bay campus in 2004.

At the planning stage and as new inhabitants trickled in, graduate students and postdoctoral fellows were among the most enthusiastic about moving to Mission Bay, Kenyon recalled. Before groundbreaking, she said, “It looked like a great big, empty lot. Some people thought it was a dangerous place to be.”

But soon, she said, “It became clear that a lot of very exciting lab groups were moving in.”

Craik agreed that in the early days of Mission Bay, “the people who were most excited to be there were those most involved with graduate education and training. Students and postdoctoral fellows were the glue that held it together.”

Students and postdoctoral fellows are still pushing research forward and fostering interactions among lab groups, and Mission Bay remains an attractive destination for them. The Gladstone Institutes, for example, have been consistently recognized year after year for being among the best places in the world to be trained as a postdoctoral fellow.

In fact, Japanese stem cell scientist Shinya Yamanaka, MD, PhD, who won the 2012 Nobel Prize for Physiology or Medicine, was once a Gladstone postdoctoral fellow. He liked it so much he eventually returned. Today Yamanaka is a Gladstone senior investigator and professor of anatomy at UCSF, and is a leading scientist at the University of Kyoto as well. 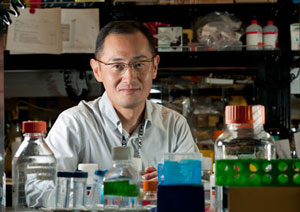 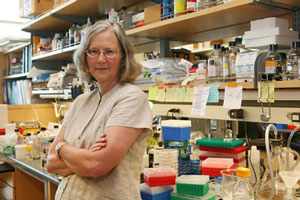 Yamanaka discovered keys to the developmental destiny of cells, and how these keys can be used to manipulate cell fate in ways that offer hope to scientists who seek new methods of providing tissues for organ transplantation and for other medical applications. His work revolutionized stem cell research. Yamanaka’s seminal paper was published in 2006, and already there is an expectation that the first clinical trials based on techniques he developed will begin this year.

Blackburn studies telomeres, bits of DNA appended to the ends of all 46 chromosomes in all of our cells. Once telomeres become too short, cells can no longer multiply to replenish body tissues. It turns out that organisms ranging in complexity from protozoans and people have a special enzyme called telomerase that may be switched on to lengthen telomeres that have shortened during cell division.

The progressive shortening of this chromosome-capping, protective bit of DNA now appears to be associated with risk for certain chronic diseases. Studies even show that people with longer telomeres are more likely to live longer and, perhaps more significantly, to have more years of healthy life.

One of the most important roles for telomeres may be in cancer. A vast majority of cancers have abnormal telomeres, which now are the target of new cancer drug development.

The opening of the Helen Diller Family Cancer Research Building at Mission Bay in 2009 now makes it more convenient for researchers who study fundamental biological phenomena to investigate how they play out in cancer through collaborations with cancer experts. 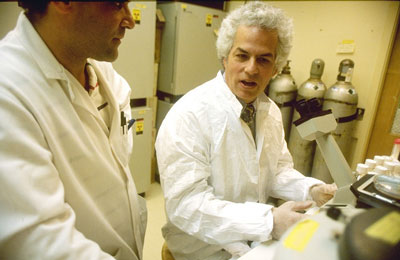 A third UCSF Nobel Prize laureate, Stanley Prusiner, MD, also recently moved his laboratory to the Mission Bay campus, where he heads the Institute for Neurodegenerative Diseases in the new Sandler Neurosciences Building. The institute is committed to creating therapeutics that will halt diseases such as Alzheimer’s, Parkinson’s, Creutzfeldt-Jakob disease and dementia resulting from traumatic brain injuries.

Prusiner won the Nobel Prize for demonstrating that a class of rare but deadly, infectious neurodegenerative diseases was not caused by an infectious life form with its own DNA, but rather by a change in the shape of a specific type of protein — a change that can be propagated. The possible role of protein shape-shifting now is a focus of study in other, more common neurodegenerative diseases, including dementias.

Like Rutter, his mentor, Craik has strived to translate basic discovery into applications in health care. Craik helped launch and still leads the “Idea to IPO” course at Mission Bay, designed to give students insight and tools to create viable business plans and to launch biotechnology industry start-ups.

While the Bay Area is the birthplace of biotech, thanks largely to the discoveries of UCSF scientists, the city of San Francisco itself has only become a biotech hotspot with the development of Mission Bay.

For instance, Bayer has moved in across the street, and after entering a new partnership with UCSF, the Center for Therapeutic Innovation, so has Pfizer.

Being close to peninsula biotech firms and the local venture capital community — and on a major transportation hub — Mission Bay scientists have taken advantage of opportunities to push their fundamental discoveries toward commercial applications in health care. Craik, Kenyon and Blackburn all have founded companies, for example. 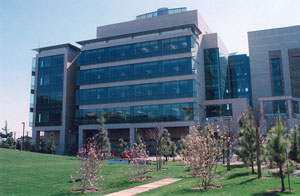 The QB3 Garage, part of the California Institute for Quantitative Biosciences, opened in 2006 at Byers Hall on the Mission Bay campus.

“Biotech wants to be around the buzz of the University – people want to be involved in that,” Craik said. “I don’t know if anyone, including me, was 100-percent certain at the beginning that this all was going to work out as well as it has.”