Not long ago, a middle-aged woman from a developing country arrived at San Francisco’s Laguna Honda Hospital and Rehabilitation Center. The woman had a rare, life-threatening illness.

Relatives who live in the Bay Area had helped her travel here for a second opinion.

The opinion was not what they had hoped to hear. The illness was extremely advanced, and the woman was admitted to the palliative care and hospice program at Laguna Honda. A team of caregivers – nurses, nursing assistants, physician, social worker, volunteer, chaplain, pharmacist and dietitian – was assigned to help ease her physical and emotional suffering.

Palliative care is specialized medical care for people with serious illnesses. It is focused on providing patients with relief from the symptoms, pain and stress of a serious illness — whatever the diagnosis. The goal is to improve quality of life for both the patient and the family.

The patient, however, made clear she did not want to die in unfamiliar surroundings, thousands of miles from home.

“It was difficult to consider sending her back to a place where there is no home health [care]…and where access to medical equipment and supplies is limited,” says Anne Hughes, an advanced practice nurse in palliative care who is part of the team at Laguna Honda. But because the patient’s wishes were quite clear, the team worked to arrange the woman’s arduous trip home.

“Several months later, she was still alive,” says Hughes, who possesses a PhD degree in palliative care from UCSF School of Nursing and decades of hands-on experience. “A testament to the healing power of home.” 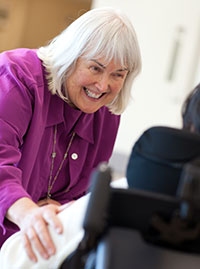 Anne Hughes with a patient

The story speaks to the way societal perceptions about palliative care have changed. As recently as 15 to 20 years ago, it was a rarity to accede to the wishes of a seriously ill patient if those wishes included refusing his or her best chance to extend life.

Today, in homes and hospitals across the country, understanding and honoring the wishes of seriously ill patients is occurring with increasing frequency; 53 percent of hospitals in California now deploy a palliative care team trained to elicit patient preferences and respond accordingly – but that, of course, also means that 47 percent don’t.

The palliative care services at Laguna Honda also highlight concepts that many experts believe are at the heart of effective health care delivery: patient-centered and team-based. While those two terms are thrown around today in nearly every imaginable health care conversation, palliative care providers have been patient-centered and team-based for almost half a century.

The Growth of Palliative Care

A few years after the nurse, physician and social worker Cicely Saunders initiated the modern hospice movement in Great Britain in the mid-1960s, Florence Wald – another nurse and former dean of Yale School of Nursing – opened the first hospice in the US.

Since then, the growth of hospice care in this country has catalyzed a broader palliative care movement, one that assumes all patients who suffer from a serious, life-limiting disease – not just those actively dying – need symptom relief and supportive care to ease the stress of coping with their illness.

The movement reached a significant milestone in August 2011 with a three-day national summit convened by the National Institute of Nursing Research (NINR), the lead agency for end-of-life care at the National Institutes of Health. The summit – titled “The Science of Compassion: Future Directions in End-of-Life and Palliative Care” – examined the state of research and clinical practice and brainstormed ways to catalyze and shape future efforts.

“It drew nearly a thousand people, an enormous number for a summit of that sort,” says Patricia Grady, director of the NINR. She saw everyone from leading scientists and clinicians to neighbors who she was unaware had an interest in the topic. “But I think the explanation for the interest is simple. Nearly everyone has dealt with or will deal with this issue.”

Leading the Charge for Palliative Care

One of the presenters was oncologist Jennifer Temel, whose 2010 article in the New England Journal of Medicine (NEJM) caused a stir by demonstrating that in at least some situations, palliative care is more than humane; it also is a valuable complement to curative treatments. Her study found that palliative care extended the life and improved the quality of life of patients with metastatic nonsmall cell lung cancer.

“We don’t yet know why patients in that study survived longer,” says intensivist and palliative care researcher J. Randall Curtis, MD, MPH, from the University of Washington, another presenter at the conference. “But it makes sense to me, given what we’re learning about the stress of symptoms at end of life and about how conversations about the goals of care can help patients who choose to do so avoid toxic chemotherapy.”

The NINR summit and the NEJM study are only two headlines from the burgeoning growth in palliative care research, clinical programs and education. That growth is fostering an expanding knowledge base that is improving the symptom management and supportive care that are the movement’s pillars.

For the full story, please go to the Science of Caring website.

Photos of Hughes by Elisabeth Fall