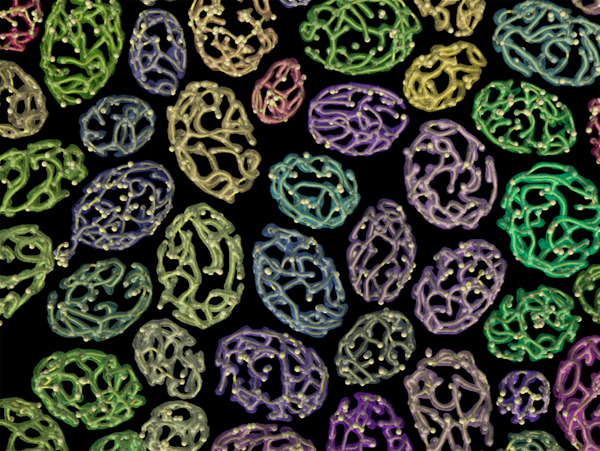 A computer-generated image of mitochondrial networks in yeast cells. Network structures are extracted computationally and represented by balls (nodes) and rods (edges).

A mother’s willingness to sacrifice her own health and safety for the sake of her children is a common narrative across cultures — and by no means unique to humans alone. Female polar bears starve, dolphin mothers stop sleeping and some spider moms give themselves as lunch for their crawly babies’ first meal.

Now an unexpected discovery at the University of California, San Francisco (UCSF) shows that even yeast “mothers” do it, giving all to their offspring — even at the cost of their own lives.

As described this week in the journal Science, the UCSF scientists found that the yeast Saccharomyces cerevisiae ensures the health of its budding offspring by pushing essential internal structures known as mitochondria into them.

Mitochondria are the mini powerhouses of living cells, supplying the chemical energy all yeast and higher life forms need to survive. Like all cellular life, yeast need these structures to survive. In the new paper, the UCSF team describes how yeast cells ferry just the right amount of mitochondria along a network of protein tracks and molecular motors into the young yeastlings, which bud off their mother like mini-me’s. 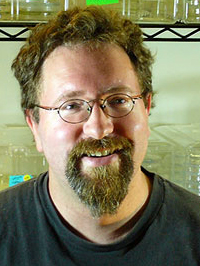 But what surprised the researchers, led by Wallace Marshall, PhD, a UCSF associate professor of biochemistry and biophysics and UCSF postdoc Susanne Rafelski, PhD, was how yeast mothers continued to give generous amounts of their mitochondria to their offspring even when it meant hastening their own death.

“The mom will pump in as many as [the bud] needs,” said Marshall. “The bud gets more and more as it grows, and mom doesn’t get any more.”

UCSF, which includes a top-ranked medical center providing patient care and many ongoing clinical studies, also is one of the world's leading institutions pursuing fundamental research in basic biomedical fields, including molecular biology, biochemistry, physiology, biophysics and genetics — work that offers insight into the ways normal cells function and what sometimes goes wrong in diseases such as cancer, AIDS, diabetes, multiple sclerosis and Alzheimer's.

The classic picture of cell division — a process known as mitosis — is an even splitting whereby one cell gives birth to two identical copies. Scientists have always reasoned that during this classic division, the mitochondria were likewise evenly split — the same way that both sides of a pepperoni pizza cut in two would have half the toppings.

But not all cells divide evenly. Human stem cells, for instance, often divide into two cells that look and behave very differently. Some cancer cells do this as well. There is a growing sense in the biomedical field, Marshall said, that understanding how a cell moves its mitochondria around during such uneven divisions may hold some of the clues to understanding aspects of stem cell or cancer biology.

Working with yeast, the UCSF team developed sophisticated microscope and computer techniques that allowed them to track the movement of mitochondria within cells. If these structures had divided randomly, they would expect to find fewer in the bud than in the mother (since the buds are smaller than the mother).

What they found instead was that the yeast mothers gave a consistent amount of mitochondria to their offspring at each generation, and so over time they had fewer and fewer of the organelles themselves. The price they paid to ensure their offspring was healthy was steep: The yeast mothers would eventually give away too many of the mitochondria to survive and begin to die off after 10 generations. By 20 generations, most of the mothers had died.

Mutant forms of yeast, which were much more stingy in giving up their mitochondria, lived much longer.

In addition to UCSF, authors on this study were associated with the Universidade de São Paulo in Brazil and Peking University in Bejing, China.

This work was supported by the National Institutes of Health through grants #R01GM070808, #R01GM097017, #R01GM026259, #P50Gm081879, and #5RO1GM097213-02. Additional support was provided through the Sandler and Boyer Postdoctoral Fellowships; the Herbert Boyer Junior Faculty Endowed Chair Award, a Packard Fellowship, an NIH NRSA fellowship, and a China Scholarship Council scholarship.