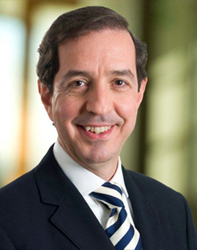 Addressing the topic of “Vaccine Justice,” Sepulveda recounted his time as chief epidemiologist with the Mexican Ministry of Health during a measles epidemic in the 1980s that killed 6,000 children. In one remote village in the mountains of Oaxaca, “all the kids in that community had died of measles,” due to the absence of a vaccine that cost less than 10 cents per dose.

“I cannot describe the pain and shame we felt,” said Sepulveda. “I promised myself I would never see that again.”

The future looks bright, he said, with vaccines available soon for dengue fever and malaria, and farther on the horizon, possible vaccines for tuberculosis, AIDS, “and eventually against drug addiction.”

Similar disparities exist in access to vaccinations. Currently, of the 130 million babies born in the world every year, 80 percent are protected by the relatively inexpensive older generation of vaccines, but only 10 percent are fully protected by all of the currently available vaccines. For less than $50 per child, said Sepulveda, “we could have all of the existing vaccines apply to every kid born in the world — and that is something the world can certainly afford to pay.”

Academia and venture capital to “invest and investigate in the new generation of vaccines so that we can imagine a world without AIDS.

As proof of the concept of vaccine justice, Sepulveda noted that the tragedy of the measles epidemic in Mexico “led to something good” — a universal vaccination program that Sepulveda administered. “As a consequence,” he said, “measles, polio, diphtheria and rubella were completely eliminated.” He concluded with a call for vaccine justice for “every kid in the world,” saying, “because we can do this, we should.”

In his talk on “Global Health Psychology,” Ghannam noted that the nature of the world health crisis is rapidly changing, with 63 percent of deaths worldwide now caused by chronic, noncommunicable diseases such as heart disease and diabetes. 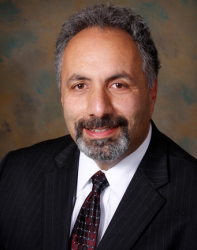 In low- and middle-income countries, almost one-third of those diseases occur in people younger than 60. “Most disturbing for me,” he said, “is that seven-and-a-half million children die each year from preventable diseases.”

All of the major risk factors for developing these diseases, said Ghannam, “are related to behavior and lifestyle change.” At the same time, there is a growing body of evidence that the vast majority can be “prevented, managed or controlled” through behavioral change.

The “profound conclusion,” he said, is that “the road to global wellness and health is through changing behavior.” At the same time, Ghannam continued, health care infrastructure, training and intervention models are still geared toward treating infectious disease and not chronic illness.

In response to this challenge, “today I stand before you with my colleagues, announcing the birth of global health psychology.” Ghannam described the new field as “the intersection among many different areas of study,” including global mental health, health psychology and behavioral medicine. “This stuff really works,” he said. “Small changes in behavior result in dramatic improvements in health and wellness.”

However, there is a “tremendous resource problem,” Ghannam admitted. “There aren’t enough physicians or health care workers in the world to address this.”

The answer, he said, is a new model of community-based mental health care. The model is based partly on Ghannam's own experience as a mental health consultant in the Gaza Strip, “the most densely populated place on the planet,” where 80 percent of Palestinian children were diagnosed with symptoms of post-traumatic stress disorder but there was only one psychiatrist available to serve 1.5 million people.

To tackle this gross imbalance, Ghannam and his colleagues developed a community-based program that replaced traditional one-on-one psychiatric interventions with mental health training for physicians, nurses, social workers and other health care providers.

“Each of these individuals was reaching out into places of worship, schools, clinics and community centers,” said Ghannam. After less than a decade of training for hundreds of community mental health workers, he said, “we are proud and pleased to report that we can now reach every single one of those 1.5 million individuals in some capacity. That is radical change.”

Ghannam noted that this new model of training and community engagement is made possible in large part through the availability of modern communications technology. In a refugee camp, he said, it’s not uncommon to find that people “don't have enough food, water or medicine, but 90 percent of them have cell phones. We want to leverage that use of mobile technology.”

He concluded, “Whether it’s in a refugee camp or a community beset by war, occupation or natural disaster, the resilience and power of the human spirit are truly remarkable, and we have to be able to use that.”