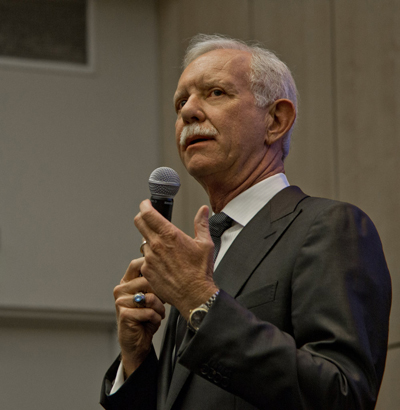 In the early days of the U.S. aviation industry, a jetliner crash was not as unthinkable as it was in 2009, when Capt. Chesley “Sully” Sullenberger’s plane hit a flock of geese and started plummeting toward New York’s Hudson River.

From 1967 to 1976, the chances of dying in a large U.S. jetliner crash were roughly 1 in 2 million. Today it’s closer to 1 in 20 million – thanks to tightened safety standards and a massive culture change in the industry, said Sullenberger, who along with his crew managed to successfully land US Airways Flight 1549 in the Hudson and save the lives of all 155 people on board.

Sullenberger shared those lessons in a talk at Cole Hall this week, telling the auditorium filled with UCSF leaders, physicians and health sciences students that such a cultural shift in health care delivery could greatly improve patient safety.

Sullenberger, who retired from the cockpit in 2010, has since become a bestselling author and a vocal patient safety advocate, joining a chorus urging the creation of an independent national agency that investigates medical errors modeled after the National Transportation Safety Board (NTSB), which investigates plane crashes and other vehicle accidents.

In aviation, federal officials began standardizing best practices and the NTSB shared lessons learned from each plane crash. In an industry where captains once ruled the cockpit with arrogance and by personal preferences, aviation officials began imposing simple procedures such as safety checklists – something Sullenberger urges in the operating room as well. 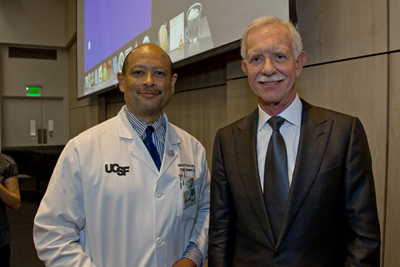 Hobart Harris, MD, MPH, chief of UCSF’s Division of General Surgery, poses with Sullenberger who was invited to speak on campus on Nov. 5 by the Department of Surgery.

The message resonated with the audience at UCSF, which Sullenberger applauded for its work in patient safety led by Robert Wachter, MD, chief of UCSF’s Division of Hospital Medicine, who has pushed for systemic changes that improve communication among physicians and nurses, particularly during the patient handoff process.

“I think his call for a cultural change in the operating room is essential and central to the evolution of modern medical practice,” said Hobart Harris, MD, MPH, chief of UCSF’s Division of General Surgery whose department sponsored the pilot’s talk.

“Checklists, time outs, etc. are tools that can and need to be adapted to the OR and other venues within the medical center,” Harris said. “I think the adoption of these tools will empower us to further improve the institution's safety record, in part through the modification of existing tools and the development of new ones.”