The 10,911-foot view from the top of Cathedral Peak in Yosemite National Park is a familiar sight for Rowan Jimenez. The 44-year-old rock climber and musician has traversed this mountain many times before, but this particular attempt on a September day in 2010 was different: It marked a triumphant return on the two-year anniversary of his double lung transplant surgery.

“My friends thought I was crazy,” Jimenez said. “But I needed to do it. I needed to know that I still had my old life. I didn’t want to be content to just be sitting on a couch. That wouldn’t have worked for me.”

Jimenez was diagnosed with scleroderma, an autoimmune disease, in early 2008 after he constantly experienced shortness of breath.

“I just thought I was getting old,” he said. “I didn’t realize it was something more serious.” 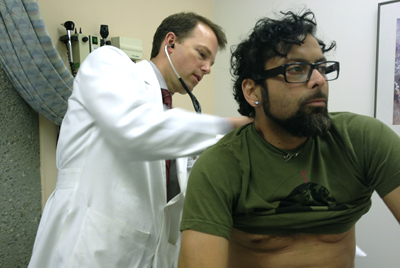 Steven Hays, MD, examines Rowan Jimenez during one of his routine follow up visits at UCSF Medical Center.

The once energetic rock performer was tired and had difficulty catching his breath. He was in the early stage of lung failure.

Jimenez went to UCSF’s Lung Transplant Program, one of the top programs in the country, according to the latest Scientific Registry of Transplant Recipients. UCSF is among three out of 70 programs for “higher than expected” outcomes based on complex risk factors.

Jimenez credits UCSF for giving his life back. He was only on the lung transplantation list for seven weeks when he received a call to come in for surgery.

“I was shocked,” he said. “I didn’t think it could happen so fast. I felt very lucky.”

Jimenez started pre-surgery visits to get him ready for two new lungs. 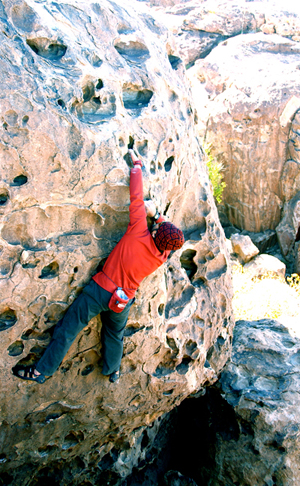 Rowan Jimenez scales up Cathedral Peak in Yosemite National Park, on the two-year anniversary of his 2008 double lung transplant surgery.

“Rowan was one of the sicker patients I had ever seen coming into this office,” said Steven Hays, MD, medical director of the UCSF Lung Transplant Program. “In fact, when I first met Rowan, I was worried we weren’t going to get his transplant done in time. He was that sick.”

Lung transplant surgery is one of the more complex surgeries a person can go through.

The surgery was a success, and Jimenez gradually began to test out his new lungs, initially by going for walks and then eventually running. His ultimate test was rock climbing again.

“Coming back and reclaiming that aspect of my life really was an exceptional experience,” he said. “It really propelled my belief that I was back to stay.”

“His case is remarkable because his recovery is so dramatic. He’s gone back to doing everything he was doing before and more,” Hays said. “So the potential is there for everyone, but Rowan has really realized that.”

Kukreja believes the success of lung transplantation surgery depends on the skill of the surgeon, long-term close surveillance and the patient’s desire to stay healthy and active. 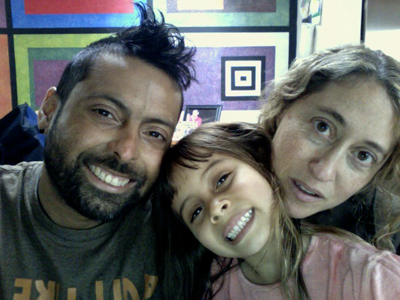 Rowan Jimenez poses with his wife and daughter.

“That really speaks to the resilience of the human body and mind, and I think Rowan’s got both working for him,” Kukreja said. “I think he’s a really great example of what can be done with these patients and what they’re able to accomplish. We have people who have gone windsurfing, gone skiing at high elevations, and they’re living life to the fullest, so there are really no limits.”

Jimenez said transplant patients also need to believe their new organs are part of who they are instead of feeling like they have someone else’s organs inside of them.

“As long as you take care of your body, and you take the initiative to make sure you addressed key elements of your life such as nutrition and health, there’s basically nothing that can stop you from doing what you want to do and having a normal life,” he said.

Because of his experience, Jimenez has become a strong advocate for organ donation. He not only wants to increase the visibility of its importance, but also highlight the lasting impact it has on organ recipients and their families.

Just as we are all looking at this world to become a better place, this is a form of sustainability within human possibilities. What we can do to better the world and change other people’s lives by becoming an organ donor would be a very radical step.”

“If we create more of a bridge relating the real meaning behind this, we will have no problem finding people advocating for organ donation, fundamentally encouraging other people and making it more of a social statement,” Jimenez said.

“Just as we are all looking at this world to become a better place, this is a form of sustainability within human possibilities,” he said. “What we can do to better the world and change other people’s lives by becoming an organ donor would be a very radical step.”

Jimenez was so inspired by his experience, he wrote a song called “ThE TrAn$pLAnT.” It begins with the following lyrics: “I want you to know wherever you are, I’m back on my feet; I got my life back.”

When he stood atop Cathedral Peak two years ago, he realized he was going to be OK. He realized that he not only had his old life back, a new life — a more hopeful life with a renewed purpose — had just begun.

“Going back up there, I felt like I was taking a different person with me up this time because we’re living in this green world where I’m now made up of recycled parts,” he said. “The entire experience has left me so inspired that I’m finding myself trying to leave a mark bigger than I had originally planned.”