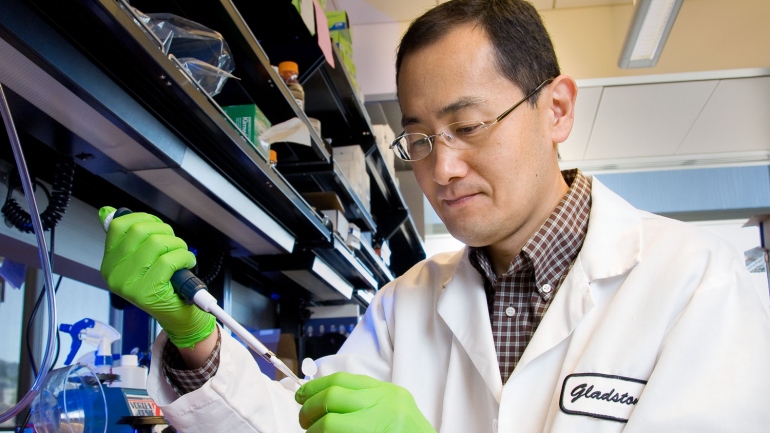 Shinya Yamanaka, MD, PhD, a senior investigator at the Gladstone Institutes — which is affiliated with UCSF — has won the 2012 Nobel Prize in Physiology or Medicine for his discovery of how to transform ordinary adult skin cells into cells that, like embryonic stem cells, are capable of developing into any cell in the human body.

Yamanaka shares the prize with John B. Gurdon of the Gurdon Institute in Cambridge, England.

The prize was awarded for the scientists’ "discovery that mature cells can be reprogrammed to become pluripotent."

Yamanaka, who works in both San Francisco and Kyoto, is also the director of the Center for iPS Cell Research and Application (CiRA) and a principal investigator at the Institute for Integrated Cell-Material Sciences (iCeMS), both at Kyoto University. The former orthopedic surgeon trained in biomedical research at Gladstone in the 1990s, before returning to San Francisco in 2007 as a Gladstone senior investigator and a UCSF anatomy professor.

“Dr. Yamanaka’s story is a thrilling tale of creative genius, focused dedication and successful cross-disciplinary science,” said R. Sanders Williams, MD, president of Gladstone, a leading and independent biomedical-research organization. “These traits, nurtured during Dr. Yamanaka’s postdoctoral training at Gladstone, have led to a breakthrough that has helped propel the San Francisco Bay Area to the forefront of stem cell research. Dozens of labs — often supported by organizations such as the California Institute for Regenerative Medicine (CIRM) and the Roddenberry Foundation – have adopted his technology. Altogether, hundreds of scientists around the world are employing the ‘Yamanaka factors’ and related techniques to search for solutions to a host of relentless illnesses — including those on which Gladstone focuses: diseases of the heart, diseases of the brain and diseases caused by deadly viruses.”

Six years ago, Yamanaka discovered that by adding just four genes into adult skin cells in mice, he could induce the cells to become like embryonic stem cells. He called them induced pluripotent stem cells, or iPS cells. In 2007, he announced that he had done the same with human adult skin cells.

Embryonic stem cells — which are “pluripotent” because they can develop into any type of cell — hold tremendous promise for regenerative medicine, in which damaged organs and tissues can be replaced or repaired. Many in the science community consider the use of stem cells to be key to the future treatment and eradication of a number of diseases, such as diabetes, blindness and Parkinson's disease.

“This is a wonderful day for Dr. Yamanaka, UCSF, the Gladstone Institutes, Kyoto University and the world,” said UCSF Chancellor Susan Desmond-Hellmann, MD, MPH. “Dr. Yamanaka’s work exemplifies the potential of basic research to transform our understanding of human cell and molecular biology, and to use this knowledge to work toward the development of treatments for currently intractable diseases. He has opened up a whole new field of discovery, and our scientists are working hard to advance the research.”

In addition to avoiding the controversial use of embryonic stem cells, iPS cell technology also represents an entirely new platform for fundamental studies of human disease — and the development of therapies to overcome them. Rather than using models made in yeast, flies or mice for disease research, iPS technology allows human stem cells to be created from patients with a specific disease. As a result, the cells contain a complete set of the genes that resulted in that disease — representing the potential of a far-superior human model for studying disease and testing new drugs and treatments. In the future, iPS cells could be used in a Petri dish to test both drug safety and efficacy for an individual patient.

Initially, the simplicity of Yamanaka’s technology was met with skepticism. But he made his data and the DNA of his work publicly available to enable any scientist to work with these new cells. Within months of the 2006 breakthrough, scientists around the world had reproduced and adopted this new approach to generating and studying stem cells.

“The impact of Dr. Yamanaka’s discovery is immense,” said Deepak Srivastava, MD, who leads stem cell and cardiovascular research at Gladstone. “It suggested that human adult cells retain a greater ability to be modified than previously thought – and could potentially be altered into whatever cell type might be desired.”

Dr. Yamanaka’s work exemplifies the potential of basic research to transform our understanding of human cell and molecular biology, and to use this knowledge to work toward the development of treatments for currently intractable diseases.

The impact can be seen at Gladstone where, for example, the Roddenberry Center for Stem Cell Biology and Medicine – launched at Gladstone last October with a generous gift from the Roddenberry Foundation – collaborates with Kyoto’s CIRA on the use of iPS technology in patient therapeutics to improve human health.

Scientific results that Gladstone has announced over the past six months underscore the value of that collaboration. In April, for example, Srivastava announced that his lab had reprogramed cardiac fibroblasts – the heart’s connective tissue – directly into beating cardiac-muscle cells in animals.

In June, scientists in the lab of Gladstone Investigator Steve Finkbeiner, MD, PhD, announced the creation of a human model of Huntington's disease from the skin cells of patients with the disease. Earlier that same month, scientists in the lab of Gladstone Investigator Yadong Huang, MD, PhD, announced the use of a single genetic factor to transform skin cells into cells that develop on their own into an interconnected, functional network of brain cells. Both announcements offer new hope in the fight against neurodegenerative conditions such as Alzheimer's disease and Huntington’s disease.

In July, Yamanaka’s own lab at Gladstone discovered that environmental factors critically influence the growth of iPS cells — offering newfound understanding of how these cells form. These results are crucial for future studies of how iPS cells grow and mature — while all of these research results point to the significance of Yamanaka’s discovery for the future creation of treatments for some of the world’s most debilitating diseases.

“The best part about this prize is that it will bring attention to — and will likely spur — the important stem cell work that scientists around the world are conducting,” said Yamanaka, who is also the L.K. Whittier Foundation Investigator in Stem Cell Biologyat Gladstone. “This iPS technology is for patients — and the more scientists who build on it, the faster we can help those who live with chronic or life-threatening diseases.”

Leading up to Monday’s Nobel prize announcement, Yamanaka has received a host of other honors recognizing the importance of his iPS discovery, including the Albert Lasker Basic Medical Research Award, the Wolf Prize in Medicine, the Shaw Prize and the Kyoto Prize for Advanced Technology. In 2011, Yamanaka was elected to the U.S. National Academy of Sciences, garnering one of the highest honors available for U.S. scientists and engineers. In June, Yamanaka won the Millennium Technology Award Grand Prize — the world's largest and most prominent technology award — along with Linus Torvalds, the creator of Linux software.

Yamanaka will be a speaker at the ISSCR-Roddenberry International Symposium on Cellular Reprogramming being held at Gladstone later this month, on October 24 and 25.