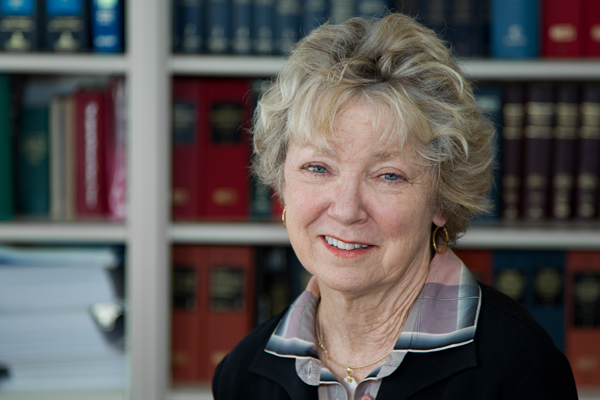 Marcia J. Canning, JD, chief campus counsel and associate general counsel in the Office of Legal Affairs at UCSF, will retire in June 2013, after almost 32 years working at the University of California.

When Marcia Canning was growing up, she loved to watch "Perry Mason" on TV but she never once thought about becoming a lawyer. She didn't even know any.

"I was certain, though, that I wanted to do something that would make a difference," said the 64-year-old Canning, JD, chief campus counsel at UCSF, who will retire next June after serving more than three decades in the UC system.

She majored in sociology and French at Holy Names College in Oakland. After graduation, she was working as a secretary at UC Davis Medical School, where her then-husband was getting his doctorate in genetics, and she decided to take a pre-law course.

The teacher was tough, the project was about search and seizure, and Canning was the only woman in the class. "I liked it. A lot. And I was able to hold my own," she said.

She enrolled at Hastings College of the Law and graduated in 1976. For five years, she was a trial attorney for the National Labor Relations Board in San Francisco and Oakland. Then she worked for 17 years at the UC Office of the General Counsel where she worked on every campus and the National Laboratories on a variety of legal projects. She moved to Hastings College of the Law in 1998 to serve as Hastings’General Counsel and arrived at UCSF in June 2001.

Once Canning discovered law, it never lost its appeal.

"I liked the way I learned to think," said Canning, sitting in the legal conference room at the Faculty Alumni House on the Parnassus campus, just down the hall from her office. "I'd always been a very good student but I felt like something was missing. Law was fun and interesting. And I was finding a methodology for how my mind could work."

Making the Rounds at UCSF

UCSF represented new territory for Canning, whose resume was extensive but not a natural fit for the job at UCSF."I told them, 'If you want someone who's steeped in health law, don't hire me.' I was interviewed by 17 people," Canning recalled. "I certainly made the rounds."

She said she relished the challenge and that certain principles in law are transferable to all areas of legal practice: "Get the facts right before making a decision. Often people will jump to a conclusion. And fairness is another principle that is key to giving good legal advice.."

She has advised people at UCSF on a wide range of concerns, including business transactions, compliance, research misconduct, contracts, whistleblower complaints, labor relations, privacy, regulatory matters and academic affairs. She has worked with employees at all levels, from deans, chairs and vice chancellors grappling with institutional issues to a custodian seeking a temporary restraining order.

Canning built an office that now consists of three other attorneys and three staff members. She puts in long hours and often works six days a week, sometimes as early as 6:30 in the morning when she is advising a surgeon or anesthesiologist.

"It's a privilege and an honor to have worked with people here," Canning said. "I'm never bored. And to some degree I like the demands of the job. At times it seems overwhelming, but I've learned to manage that."

"It helps to have a child or grandchildren," she said. "You simply are special to them when you walk in the door and you drop everything else."

She lived close to Dolores Park in San Francisco for most of her tenure at UCSF but moved a few years ago near Jack London Square in Oakland, where her two grandchildren reside. She takes her granddaughter, 10, and grandson, 7, to the California Academy of Sciences most weekends, as well as the Randall Museum.

Canning grew up in Lafayette and developed at affinity for UC at a young age. Her father worked at UC Berkeley, where he brought his daughter to see her first opera and her first basketball game. The campus upheaval of the 1960s was dinnertime conversation, said Canning, who added that her dad sometimes had to step over protesters to get to his office in Sproul Hall.

As much as she'll miss UCSF, she feels like it's time to do other things. "I'm going to read 'Moby Dick,' which I've never done," Canning said. "I'd like to do some traveling and work in my grandchildren's school. I might also take up playing the banjo or tap dancing.

She already enjoys going to the San Francisco Opera and American Conservatory Theater, as well as taking walks with friends where they can catch up and still get exercise.

"I probably do best in some sort of structure," Canning said. "I grew up wearing a uniform in Catholic school, and what I've learned about myself over the years is that I've created a variety of my own uniforms. I expect to do the same thing with structure. I’ll figure out my own structure — It's my own little way of adjusting so that I'm comfortable."