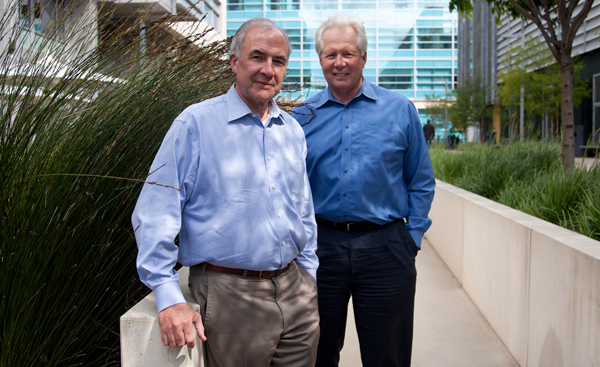 Paul Volberding, MD, left, and Warner Greene, MD, PhD, pose in the courtyard of the UCSF-Gladstone Center for AIDS Research (CFAR), which has been awarded more than $15 million over the next five years by the National Institutes of Health.

The National Institutes of Health (NIH) has awarded more than $15 million over the next five years to the UCSF-Gladstone Center for AIDS Research (CFAR) to continue its pioneering translational AIDS research. It’s the sixth renewal of the center’s grant.

The UCSF-Gladstone CFAR has played a crucial role in maintaining and extending the leadership role of San Francisco in responding to the HIV epidemic since its inception as one of the first CFARs funded almost 25 years ago, said co-director Warner Greene, MD, PhD, director of the Gladstone Institute of Virology and Immunology and UCSF professor of medicine.

“We are a CFAR that seeks to be nimble and responsive, constantly asking where the field is moving and how we can help position our community to respond to new and emerging topics in HIV research,” Greene said. “As an example of how our CFAR operates and its impact, one of the hottest topics in HIV right now is research towards a cure. HIV latency is one of the fundamental obstacles to achieving a cure.” 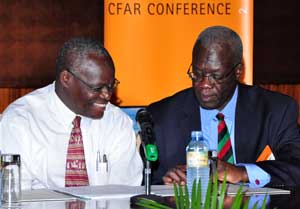 HIV latency is the processes through which HIV manages to hide and persist in various cells and tissues in HIV-infected persons even after many years of successful suppression of the virus using antiretroviral medication.

The UCSF-Gladstone CFAR provided initial pilot funding for HIV latency research in 2003, and the findings generated by that research led to the NIH awarding the first major HIV latency program project grant, Greene said. The research conducted with that grant then helped lead to the NIH’s Delaney Collaborative initiative last year, providing $80 million to three collaboratories — two of which involved UCSF and Gladstone investigators — seeking to develop a cure for HIV, he added.

The center has succeeded in stimulating several advances in HIV/AIDS research, including:

The mission of the NIH CFAR program, first funded in 1988, is “to support a multi-disciplinary environment that promotes basic, clinical, epidemiologic, behavioral and translational research in the prevention, detection and treatment of HIV infection and AIDS.”

Looking ahead, the center has identified three key areas of investigation:

CFAR co-director Paul Volberding, MD, director of the UCSF AIDS Research Institute and professor of medicine at UCSF, said the center has been focusing on work in Africa, where it held the first Sub-Saharan Africa CFAR Conference last year in Kampala, Uganda, bringing together 240 researchers from 19 domestic CFARs and collaborators from 13 African countries.

“One of the most rewarding directions our CFAR has taken in recent years has been in building international collaborations, chiefly in East Africa,” Volberding said. “While we are conducting research in many countries, we have built a strong focus in Uganda, Kenya and Tanzania." 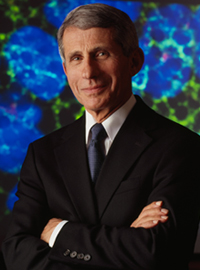 On November 8, the center also will host the National Centers for AIDS Research Scientific Symposium, titled “CFAR and HIV Therapy at 25: Seeking an End to AIDS,” at the UCSF Mission Bay Conference Center. Anthony S. Fauci, MD, director of National Institute of Allergy and Infectious Disease, will be giving the keynote address, and this event will include the recognition of two important silver anniversaries — the establishment of the CFAR network and the introduction of AZT, the first therapeutic for HIV.

Other emerging initiatives for the center include targeting health disparities domestically through partnering with the UCSF Center for AIDS Prevention and the San Francisco Department of Public Health and expanding community engagement by partnering with Project Inform and the Forum for Collaborative Research.

“Even though it is 25 years since our first CFAR grant and in many ways the epidemic has changed dramatically, we continue to work with the same urgency to overcome the challenges that HIV/AIDS poses in the Bay Area, nationally and around the world,” concluded Volberding.