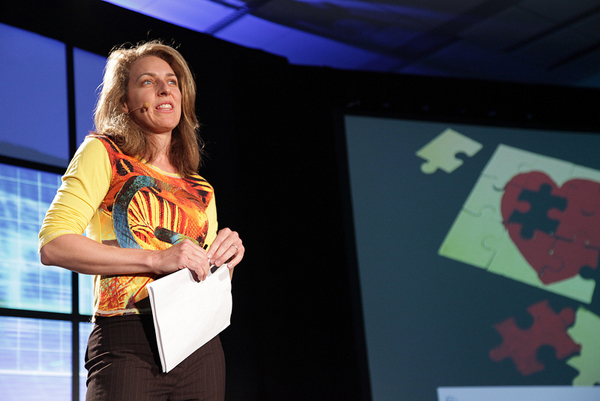 Susannah Fox of Pew Internet was the opening keynote speaker for the Medicine X 2012 self-tracking symposium at Stanford University on Sept. 28.

A steady stream of new apps and devices that can be synced to ever-more sophisticated mobile phones is flowing into consumers’ hands, and this technology is revolutionizing the practice of self-tracking, in which individuals measure and collect personal data to improve their heath.

Self-trackers are using these tools to monitor sleep, food intake, exercise, blood sugar and other physiological states and behaviors. In some cases, they are using the data to identify what triggers or worsens flare-ups of chronic health disorders on their own, or with the help of an online community. In others, patients are even working together with physicians and scientists to conduct experiments, pooling their data for analysis that may shed light on the cause or best treatment for their disease.

This phenomenon was explored at a Sept. 28 symposium at Stanford University, where attendees and presenters — including two UCSF physicians — asserted not only that self-tracking can help patients to improve their lives, but also that self-tracking has the potential to change medical practice and the relationship between patients and their health care providers. The event was part of Medicine X 2012, a three-day conference on social media and information technology’s potential impact on medicine.

“We have the studies to show that self-tracking can really turn things around for people,” said Susannah Fox, an associate director with Pew Internet, who gave the opening keynote address.

According to an upcoming Pew Internet and California HealthCare Foundation report presented by Fox, 34 percent of self-trackers said their data collection had affected a health decision; 40 percent said they asked their doctors new questions or sought second opinions as a result of self-tracking; and 46 percent said self-tracking changed their overall approach to health.

Even so, the potential benefit of self-tracking is much greater than currently is being realized, Fox said. Only about 11 percent of adults are using health apps – a rate that’s leveled off since 2010 – while the other self-trackers are employing low-tech methods such as paper and pencil.

The San Francisco Bay Area may represent the vanguard of the self-tracking movement. It’s home to the first self-tracking meet-up group, called “Quantified Self,” and there now are dozens more across the country. 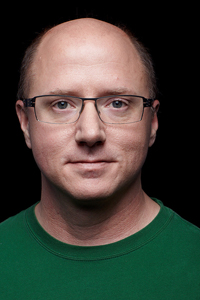 Allan Bailey brought his type 2 diabetes under control for the first time by using a continuous glucose monitor.

Patients Taking Health into Own Hands

During the daylong symposium, self-trackers reported on their personal experiences. Many said they tried to discuss their data with physicians, with varying degrees of success.

Allan Bailey, an engineer who’s had type-2 diabetes and uncontrolled blood sugar for years, turned to self-tracking because he "was tired of following the same prescription … diet, exercise and watch what you eat.”

Also dissatisfied with finger-sticking for glucose time points, Bailey decided that he wanted a continuous glucose monitor – a device normally only used to help manage type-1 diabetes – to help him determine why his blood sugar was out of control. His physician disagreed, and it took months before she relented and prescribed the device. Bailey paid the substantial costs for monitoring out of his own pocket.

“I quickly found out exactly what was happening, because I would eat something and see the result.” As for what was keeping his blood sugar elevated, “It was quite clear that it was carbs, bread and grains,” Bailey said.

“They never thought of it as a behavior modification device, and that’s what it turned out to be,” he added. “I didn’t really realize it was changing my behavior until my wife said, ‘Why aren’t you eating bread anymore?’”

Bailey said he lost 40 pounds and that his blood sugar (HbA1c) now is in the “low fives,” a level that may be low enough to prevent additional diabetes complications.

Bailey’s story could have implications for the millions who suffer from diabetes, many of whom already participate in online communities and share discoveries about diet, exercise and glucose control. Better and more thorough self-tracking potentially could allow millions to better control their disease.

The two UCSF physicians who spoke at the symposium are striving to make self-tracking more integral to medical practice, from somewhat different perspectives.

Paul Abramson, MD, a UCSF clinical instructor who described himself as a longtime self-tracker, started off in engineering but switched to medicine because he was more drawn toward hearing people’s individual stories than toward doing research in a conventional way, he said. 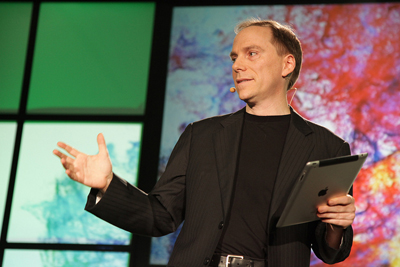 Paul Abramson, MD, spoke at a session on spreading opportunities for self-tracking.

“There is a real lack of interactivity and [patient] empowerment in the standard model,” of medical practice, Abramson said.

In his private practice, Abramson has brought in co-workers he calls “quant coaches,” expert peers who can help patients identify and achieve self-tracking goals and who can work together with the physician and patient to help solve medical problems, such as irritable bowel, chronic fatigue, depression, psoriasis, addictions, diabetes, anxiety and headaches and non-cardiac chest pain.

Abramson said that to him the process of engaging with and helping patients to solve problems and make decisions is more important than the data collected.

Self-Tracking Data for the Greater Good

Meanwhile, Ida Sim, MD, PhD, a bioinformatics expert and professor of medicine and co-director of Biomedical Informatics of the Clinical and Translational Science Institute at UCSF, is motivated to pool the data obtained by self-trackers for the greater good.

“We would like to have more people do this, so we can learn more, and so we can advance health more,” she said. “The real excitement comes if we can sum the experiments and our experiences with experiments.” 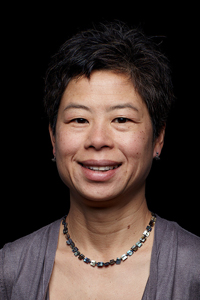 Mobile health, or mHealth, refers to the practice of medicine through the use of technologies oriented toward mobile communications devices, and Sim last year co-founded Open mHealth, a non-profit organization aimed at improving chronic disease management by establishing partnerships between the public and private sectors to develop an open software architecture based on shared data standards. By doing this, Sim and her Open mHealth colleagues hope to address problems of incompatibility among apps, devices and mobile phones.

There are three uses for the data, Sim said. First. patients needs to be able to figure out if their self-experimentation is working. Second, physicians want to know how their patients are doing on a new treatment without having to wait months, or may want to provide encouragement, or modify dosages. And third, the data can act a research evidence to generate knowledge about what works, in which context and for which people.

Sim described developing three basic types of modules — one type for self-tracking experimentation, one for clinical practice, and one for research. Each type would independently provide feedback to its main users, but each would also provide data and feedback for the other modules. Currently there are many incompatibilities that prevent such feedback from taking place, she said.

Some expressed concern that agendas — such as “big data” capture for research analysis —might put a damper on the explorative spirit of peer-to-peer online communities. Many self-trackers value supporting one another and sharing information on innovative experiments. Would health care organizations that conduct research seek to constrain exploration in favor of narrow research standards or for their own empowerment?

“I think in no way is [Open mHealth] meant to exclude that kind of open community,” Sim responded. “I want that community to be really robust and vibrant, because I think we are going to find all kinds of interesting things just from the crowd experimenting that those of us in our ivory towers maybe don’t know.” 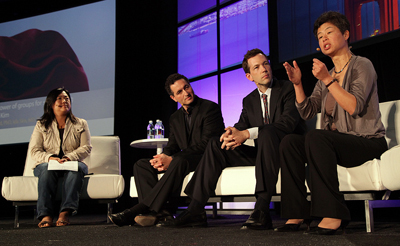 Ida Sim, MD, PhD, participated in a panel on how groups can self-track together.

Clinical researchers have long depended on imperfect responses to patient surveys and self-reporting for many research studies, and clinicians also typically rely on reports from their patients in managing chronic disease. If mHealth tools help motivate patients and make it easier to track indicators and symptoms, then these tools are likely to improve the information physicians and researchers receive, presenters noted.

Both a more rigorous approach and a more open and personal type of communication have value, according to Sim. “We want to accommodate as many approaches as possible, ” she said.