The University of California, San Francisco (UCSF) has received a $20 million gift from philanthropist Chuck Feeney to build a new hub for Global Health Sciences at the UCSF Mission Bay campus. Feeney made the gift through The Atlantic Philanthropies, the foundation he created in 1982.

This commitment brings Atlantic’s total support of UCSF Mission Bay to more than $292 million, making Feeney the single greatest contributor to any campus in the University of California system.

“Chuck Feeney has been instrumental in building the Mission Bay campus into one of the world’s leading centers for innovative health sciences,” said UCSF Chancellor Susan Desmond-Hellmann, MD, MPH. “His support for Global Health Sciences will enable us to translate that vision into a direct impact throughout the world.”

The new gift will allow UCSF, for the first time, to have one physical location for global health researchers, scientists and students, and will jumpstart the University’s vision to become one of the world’s leading centers for global health sciences. 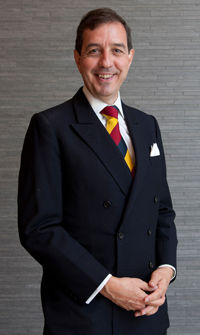 “There is tremendous interest among our faculty and students in having a global impact on health, ranging from the most remote villages in Africa to cities here in the United States,” said Jaime Sepúlveda, MD, DrSc, MPH, executive director of UCSF Global Health Sciences, who joined UCSF in September 2011. “This building will enable us to place scientists, students and health care professionals in one physical space, on one of the most dynamic health sciences campuses in the world, to train the next generation of leaders in this field.”

The gift and building will enable UCSF to create a hub for global health research and education, by tapping the intellectual capital of the San Francisco Bay Area which includes some of the world’s top universities, centers of innovation in both biosciences and technology, and entrepreneurship. The region is also naturally suited as a global health center due to its diverse population and position as a gateway to both Asia and Latin America.

“We have an opportunity here in San Francisco to have an impact on global health that is unique in the world,” Sepúlveda said. “This building will help us achieve that.”

The gift also furthers Feeney’s vision for UCSF Mission Bay to become “one of the major bioscience centers of the world,” helping improve health for people worldwide. As such, this investment builds upon his long-term efforts to support health and education throughout the world, from district hospitals in Vietnam to the Irish university system and his alma mater, Cornell University. In July 2012, Atlantic announced its plans to give away the remaining $1.3 billion of its endowment by 2016, on top of the $6.2 billion the foundation has already donated to mission-driven organizations around the world.

In April, UCSF presented philanthropist Chuck Feeney with the UCSF Medal for his outstanding contributions to UCSF at Mission Bay. The Global Health gift makes Feeney the largest-ever donor to any UC campus.

“Chuck Feeney exemplifies ‘Giving While Living:’ he is committed to helping solve the world’s urgent problems now, before they become even more difficult to surmount,” said Christopher G. Oechsli, Atlantic’s President and CEO. “He has confidence that UCSF and Mission Bay will be the hub for many of those global solutions.”

UCSF has a long history of tackling critical global health issues, including serving at the forefront of research and care in the HIV/AIDS epidemic, conducting extensive research in parasitic diseases such as malaria and Chagas Disease, and demonstrating a commitment to addressing health disparities worldwide, including in San Francisco. 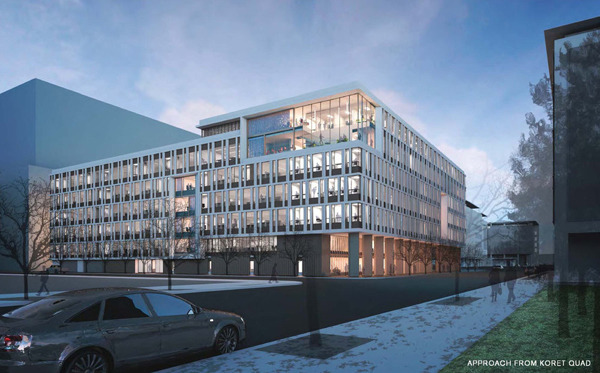 The Global Health Sciences and faculty building will be strategically located at 4th and 16th streets, across from QB3 and the future hospitals. Schematics courtesy of architecture firm WRNS Studios.

Roughly 1,200 faculty, staff and students at UCSF currently are engaged in global health activities, which reach almost every country in the world. In response to that engagement and student interest, UCSF created the nation’s first master’s program in global health sciences. Now entering its fifth year, the program currently has 40 students, Sepúlveda said the program expects to double its student body in the coming years, adding PhD, certificate and online programs.

What is global health and how is it different from public health?

Global health is public health on a large scale. While public health often focuses on specific issues such as vaccinations, hygiene and infectious disease, Global Health Sciences incorporates expertise across a wide range of disciplines, including law, economics, politics, transportation, and issues such as how health is affected by migration.

How has global health evolved?

For many years, we have thought of global health in terms of the infectious- and tropical diseases afflicting developing countries. There is an increasing awareness now that global health truly concerns all of us. Now that the world is so interconnected, infectious diseases such as SARS or the H1N1 influenza outbreak a few years ago have become a global phenomenon. At the same time, issues we’ve always associated with developed nations — obesity, diabetes and cardiovascular disease, among others — are increasingly the issues of the developing world, as well. Global health addresses all of those issues.

What is UCSF’s vision for Global Health Sciences?

UCSF has a long history of work in global health, with a strong focus on Africa. Today, roughly 1,200 faculty, staff and students from all four UCSF schools are working throughout the world to improve health in those communities. There is a great opportunity now to benefit from our location in the San Francisco Bay Area — a tremendously diverse region that is a gateway to both Asia and Latin America. Our collective vision is to harness that expertise, diversity and geography to create a new hub for global health on the West Coast, with an eye on our Asian and Latin American neighbors. That hub will include a School of Global Health Sciences, starting in 2015, which will build upon the intellectual capital of the entire UC system, as well as the innovative approaches of Silicon Valley and the greater Bay Area.

How will this gift support that vision?

This gift from Chuck Feeney and The Atlantic Philanthropies will help us create a central, collaborative space to bring together — under one roof — the multiple people and elements of UCSF Global Health Sciences that are currently scattered throughout the city. These groups will benefit from internal synergies, while also having the opportunity to cross-fertilize with the basic and clinical sciences at Mission Bay, so we can apply that knowledge to bring better health solutions to vulnerable populations. Ultimately, it will enable us to double the number of students enrolled in Global Health Sciences programs, to train the next generation of global health leaders.

The building is the fourth major UCSF Mission Bay project supported by Feeney and his foundation. Previous support includes cornerstone funding for four projects: $20 million for a cancer research building; $125 million toward an integrated building for cardiovascular research and care; and $125 million for the campaign to expand the UCSF Medical Center by building a children’s, women’s specialty and cancer hospital complex.

The new building at 4th and 16th streets, funding for which was approved by the UC Board of Regents on Sept. 11, will house roughly 1,500 faculty and staff. It will include space for the entire Global Health program, as well as for clinical faculty working in the hospitals across the street. It also will provide space for the UCSF chancellor and for several academic research units that currently lease facilities off-campus.

Construction is expected to begin in March 2013, and will be completed in August 2014, pending UC Board of Regents’ approval of the building design in November.

UCSF Mission Bay, which launched in 2003, is one of the world’s premier bioscience campuses, where basic scientists are studying the causes and potential treatments for a range of intractable diseases and physicians are applying that knowledge to directly benefit patients. In 2015, UCSF will open a new medical center adjacent to the campus, to help translate that research into better health. The campus also has served as a magnet for the city’s newest urban development zone, helping attract more than 100 bioscience companies.