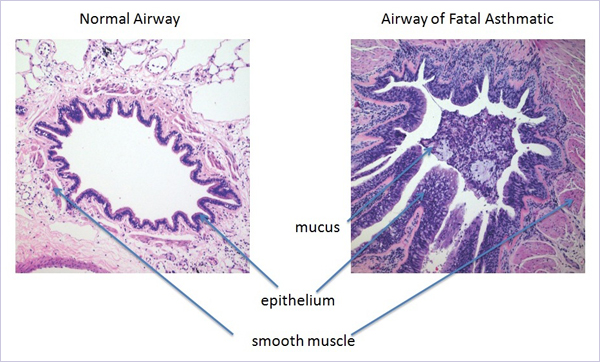 Images compare an open airway, left, with a closed airway clogged by mucus buildup and an increased amount of smooth muscle cells.

Asthma, a respiratory disorder that causes shortness of breath, coughing and chest discomfort, results from changes in the airways that lead to the lungs. It affects 18.7 million adults and 7.0 million children in the US, according to the Centers for Disease Control and Prevention.

In a paper published Monday in the Proceedings of the National Academy of Sciences (PNAS), researchers from UCSF, Johns Hopkins University and Duke University demonstrate that a specific calcium-activated chloride channel holds valuable clues to reducing two biological processes that contribute to the severity of asthma. These channels regulate airway secretions and smooth muscle contraction, the two major factors that lead to an asthma attack. 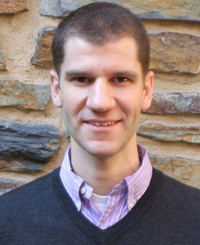 “Maybe if we could inhibit both of these processes by blocking this one channel, then we could affect the two symptoms of asthma,” said senior author Jason Rock, PhD, assistant professor at the UCSF Department of Anatomy.

Normally humans have few mucus-producing cells but asthma sufferers have an elevated number of these cells in the lining of the tubes that lead to the lungs. Asthmatics also have an abnormal amount of smooth muscle surrounding the airway tubes. Even the slightest stimulus can cause these to contract.

“The overabundance of mucus plugging the airways combined with hyper-contractility of the smooth muscle — when the tubes get really small — make it difficult to move air in or out,” Rock said. “A lot of people equate that with breathing through a straw.”

Rock and his colleagues focused on a calcium-activated chloride channel called TMEM16A. This channel secretes chloride ions in response to rises in intracellular calcium. It regulates a significant number of biological processes such as neuron firing, gastrointestinal activity and the secretion of sweat and tears.

The researchers wanted to prove that the channel was present in asthma. They studied human lung samples and looked for the mRNA (messenger RNA which carries information from the DNA to the sites of protein synthesis), and compared protein levels in asthmatic and non-asthmatic patients.

“We found that the level of this channel was increased in the mucus producing cells of asthmatics compared to non-asthmatics,” Rock said. “And we also validated this in several models of asthma, including mouse models. That was step one.”

“We tested the ability of these chemicals to inhibit TMEM16A and other channels, and we found that they specifically block TMEM16A,” Rock said. “It is great that we came across these molecules that were unknown previously since we can now try to get into clinical trials to benefit patients.”

Then, the authors simulated asthma in a dish and blocked the channel to observe whether it affected mucus production. “Mucus produced by these cells wasn’t secreted as efficiently,” Rock said. “We also studied airway smooth muscles of human patients who had given their organs to science, and we could see that blocking TMEM16A inhibited their contraction response as well.”

Rock is in the pre-clinical phase to test the safety and effectiveness of the blockers in animal studies. If that goes well, Phase One of clinical trials can begin.

“At present, I am optimistic,” Rock said. “This could be a major advance to help asthma sufferers.”

This study was supported by the Strategic Program for Asthma Research, the Cystic Fibrosis Foundation, the National Institutes of Health and the Howard Hughes Medical Institute.