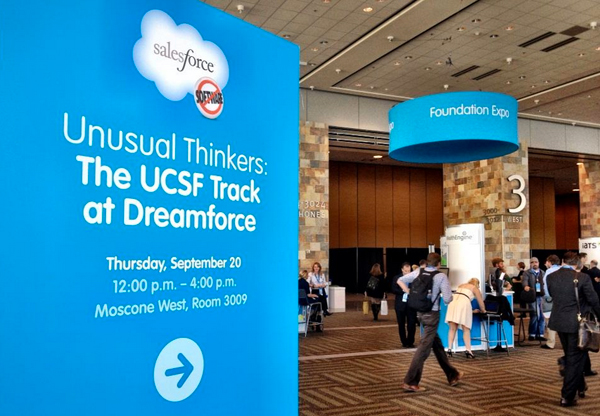 Social media has the potential to revolutionize health care, but it will take collaboration by unusual thinkers from Silicon Valley as well as medical institutions, UCSF leaders say.

Some of UCSF’s biggest innovators gathered last week at Dreamforce 2012 to discuss exciting technological advances by the University, from new mobile apps that help connect doctors with patient data in real time to a groundbreaking project to build the world’s first artificial kidney. They called on audience members at the Salesforce.com cloud-computing conference draw on their own expertise to help push innovations to the next level.

“As we look inside health care industry, we realize the answers don’t necessarily come from people in health care,” Mark Laret, CEO of the UCSF Medical Center and UCSF Benioff Children’s Hospital, said in his introduction of the annual UCSF track called “Unusual Thinkers.” “They come from engineering, robotics, customer relationship management, others in different areas who can bring creative, unusual thinking to help solve the problems of the health care crisis facing this country. We encourage everyone to get engaged.”

Chancellor Susan Desmond-Hellmann, MD, MPH, kicked off the track with a session exploring the possibilities of social media in changing medicine.

With nearly half of all American adults owning a smartphone, according to a recent Pew Internet report, social media already has fundamentally changed the way we communicate, do business and get entertained — but it hasn’t yet made a significant impact on health care. Desmond-Hellmann acknowledged the gap, noting some of the main hurdles such as patient privacy and safety standards.

“The stakes in health care are so high,” she said. “So how do we not just acknowledge the gap, but deal with the reality that in fact when the stakes are high and it’s our health or our family’s health, we actually aren’t willing to make mistakes or accept errors?”

Answering that question is the challenge at hand, said Desmond-Hellmann, who for now sees the greatest potential for social media in two areas: efficiently connecting researchers to patients for clinical trials and creating a sense of community for patients who are going through health crises such as cancer.

“That can be an incredibly isolating and frightening experience,” Desmond-Hellmann said. “What I see with social media is, that ability to connect in your own way is so powerful — to decrease fear and enhance connections.”

There’s an App for That

UCSF already has been making inroads with the technology, pioneering mobile apps that are allowing physicians and nurses to do their jobs more easily and patients to be more engaged with their own health.

A session showcasing some of these apps included Arup Roy-Burman, MD, medical director of the Pediatric Intensive Care Unit at UCSF Benioff Children’s Hospital, who is working to improve quality of service through gaming.

UCSF teamed up with Salesforce.com and Bunchball to create an app that taps into the high-performing medical staff’s competitiveness to offer extra incentives for ensuring safety to reduce hospital-acquired infections, which account for nearly 100,000 deaths annually in the United States. Recently launched as a pilot with 100 hospital nurses, each gamer is placed on a team and given points for various tasks, such as watching a designated training video or demonstrating competency in specific areas.

Another app by Anthony Luke, MD, associate professor of orthopedic surgery, is geared toward the growing trend in marathon running. The RunSafe smartphone app, which debuted at this year’s San Francisco Marathon, allows medical professionals working at races to communicate with each other and easily access the health information of each runner, even if the person is found unresponsive.

The GreenDot open-source platform was the brainchild of Aaron Neinstein, MD, a clinical fellow of endrocrinology, and Jenise Wong, MD, PhD, assistant professor of pediatric endrocrinology, that aims to make diabetes data more accessible to both doctors and patients.

Most diabetes patients own multiple devices — glucose monitors, insulin pumps — for managing their condition, and the data collected from these devices often are trapped in software applications that won’t share the information. GreenDot merges the data from all these devices to provide doctors and patients with a comprehensive view and allows them to communicate about daily trends.

In addition to social media, the Dreamforce track also highlighted other major advances at UCSF that marry Silicon Valley technology with cutting-edge medicine.

Shuvo Roy, PhD, a bioengineer on the faculty of the School of Pharmacy, used his background in electrical engineering and physics to work on developing the world’s first artificial kidney — a small box-shaped device that would be implanted and function like a human organ. To create the device, Roy’s team of 40 researchers is using silicon to create a super-thin artificial membrane for filtering blood.

Thomas Ferrin, PhD, director of the Resource for Biocomputing, Visualization and Infomatics (RBVI) at the School of Pharmacy, worked to create a software application that allows researchers and students to view 3-D, interactive models of molecular structures. Ferrin demonstrated the software, showing the audience an HIV capsid model and how drug molecules interact with the capsid’s structure.

Mitchel Berger, MD, chair of the Department of Neurological Surgery, has spent the last two decades pioneering a brain-mapping technique for removing brain tumors. Using electrical currents to determine which areas control language and other essential functions, Berger is able to sidestep these areas when attacking the tumor and reduce the risk of brain damage by more than half.

These innovations are made possible not only by the high caliber of talent at UCSF, but also what Sam Hawgood, MBBS, dean of the School of Medicine and vice chancellor for medical affairs, called the “pervasive culture of intellectual curiosity.”

As Laret put it: “Unusual thinkers require special environments — environments that are collaborative, that foster innovation and creativity, where people are allowed to take risks and fail and people are allowed to think outside their comfort zone. One of the great things about UCSF — and in fact, one of the great things about Salesforce.com and other organizations who are represented here — is that we pride ourselves on having an environment that is attractive to unusual thinkers and an environment that inspires creativity.”