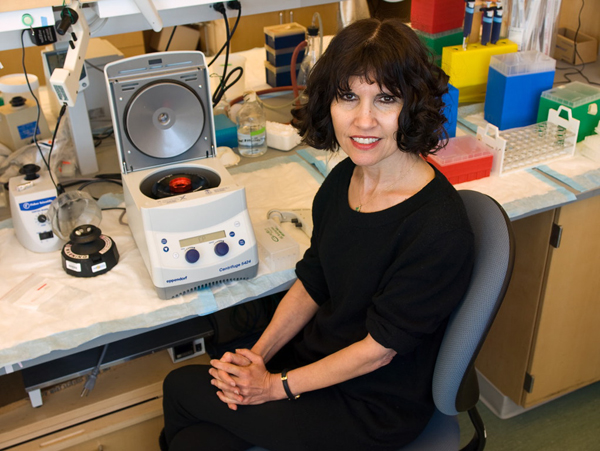 UCSF's Kathleen Giacomini, PhD, a leader in the study of pharmacogenomics – how an individual’s genetics determine his or her response to medicines, is partnering with the Food and Drug Administration on a project to identify drug interactions before the medicines reach patients.

The UCSF-FDA TransPortal is the result of partnership spearheaded by UCSF and the U.S Food and Drug Administration (FDA). Its focus is on how drugs interact with gatekeeper proteins called membrane transporters.

Transporters play specific roles as hosts or bouncers to either boot out specific drugs or to escort them inside. They control whether drugs can gain access to cells and organs throughout the body, including the liver and kidneys — big players in drug metabolism and elimination.

In recent years specific transporters have been found to play a role in drug side effects, such as the muscle pain and weakness sometimes caused by statins. Transporters influence the effectiveness of certain anti-cancer treatments.

An unanticipated drug interaction with a transporter associated with the blood-brain barrier determines how much of the anti-flu drug Tamiflu gets into the brain, and might help explain rare cases of suicide documented among young Tamiflu users.

Kathleen Giacomini, PhD, chair of the Department of Bioengineering and Therapeutic Sciences at UCSF, a joint program of the UCSF schools of pharmacy and medicine, is an international expert on transporters and leads the partnership. She is a leader in the study of pharmacogenomics – how an individual’s genetics determine his or her response to medicines. Giacomini's lab focuses on the roles of membrane transporters in drug absorption, disposition, targeting, and in clinical drug response.

Giacomini also is a leader within the International Transporter Consortium, a collaborative group of scientists from academia, industry and the FDA that explores the role of transporters in therapeutic and adverse drug responses. She has identified several genetic variants among these transporter proteins that can cause metabolism of certain drugs to vary among individuals.

Drugs rely on the smooth operation of specific membrane transporters, of which there are dozens, but some drugs can affect the functioning of a transporter that another drug relies upon.

In addition, researchers are discovering genetic variations among individuals in transporter genes that can affect drug effectiveness and safety.

The FDA already has issued guidelines strongly recommending that drug interactions with seven membrane transporters be tested, but there is information on the new site available on many more.

To better understand how drug concentrations rise and fall within the body after a particular dosage, one ought to know which transporters act on the drug, Giacomini said — but that is not all one needs to know.

Drugs taken at the same time might rely on the same transporters to get where they’re going. More dramatically, sometimes a co-administered drug can inhibit the workings of a transporter the other drug relies on.

While much remains to be discovered about how drugs interact with transporters, drug developers can use the UCSF-FDA TransPortal to make better use of what is already known, she said.

The project is one of many that the FDA has supported through its Critical Path Initiative, through which it aims to speed the development of improved treatments for patients by facilitating better use of scientific discoveries, technical tools and information technology in the evaluation of the safety, effectiveness and manufacturability of new medical products.

Through the initiative, the FDA strives to bring together federal agencies, patient groups, academic researchers, industry, health care practitioners, and others to collaborate on practical solutions to problems that slow the advancement of new treatments through the drug development pipeline.

During a May 2012 lecture on UCSF’s Mission Bay campus, Janet Woodcock, director of the FDA’s Center for Drug Evaluation and Research (CDER), said that evaluating the effectiveness of drugs remains a “huge challenge.” There is a need for better tools, techniques and strategies to identify winners, minimize costs and reduce failures during drug development, according to Woodcock.

The UCSF-FDA TransPortal helps further these aims, Giacomini said, not only by providing a compendium about what has been learned to date about drug-drug interactions at transporters, but also because it offers guidance about how to select and conduct pre-clinical studies to identify potential interactions with new drug candidates.

Innovation or Stagnation:  Challenge and Opportunity on the Critical Path to New Medical Products