U.S. Food and Drug Administration (FDA) officials are being assailed by the citizenry they serve. Some attack them for slowing down or impeding drug approvals, while others accuse them of safety lapses.

According to FDA official Janet Woodcock, MD, the agency is blamed — unfairly — for losing jobs and stifling innovation on one hand, and for letting too many unsafe drugs onto the market on the other. “I hear this every day from both sides,” Woodcock said during a lecture on the UCSF Mission Bay campus on April 26.

Woodcock, director of the agency’s Center for Drug Evaluation and Research (CDER) — which is responsible for ensuring the availability of safe and effective drugs — said the FDA is not the cause of slow drug development.

The expense of shepherding drugs through clinical trials may be driving down investment in some quarters, Woodcock said. Meanwhile, instances of serious drug side effects coming to light only after drugs have reached the market have led to complaints about the agency’s alleged failures to safeguard the public.

Woodcock and her CDER staff oversee clinical trials and evaluate drugs before they can be sold by prescription or over the counter. They provide caregivers and patients with information for the safe use of drugs, and they target the illegal sale of drugs that are unapproved, contaminated or fraudulent. 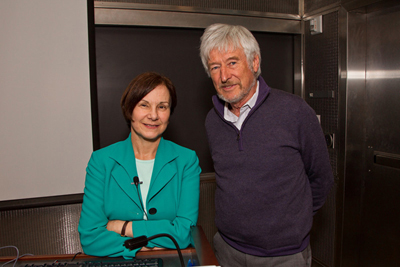 Janet Woodcock, MD, director of the center for drug evaluation and research at the FDA, with Regis Kelly, PhD, director of the California Institute for Quantitative Biosciences (QB3), before her talk titled, "Today's biomedical innovation: Lost in translation?," as part of the QB3 lecture series, or "[email protected] Seminars."

“I don’t think you can say FDA review times are a barrier, although our standards may be difficult to meet,” Woodcock said. A significant number of new drugs continue to gain approval. “In 2011, the FDA approved 30 new molecular entities, and that’s more than we have seen in a while,” she said.

Still, ten drugs enter Phase I trials for every one that is approved, according to Woodcock. And to bring an innovative drug to market often requires a decade and a billion dollars of investment. Companies “cannot afford to invest that in research and development and get so few drugs out at the other end,” Woodcock said.

Some of the costs are driven by growing expectations in recent decades for the pre-marketing evaluation of drug performance, both for safety and efficacy, Woodcock said. “There has been a decreased tolerance of uncertainty,” she said — particularly evident beginning in the 1990s — and regulators have responded with additional testing requirements. Pharmaceutical companies have in many cases decided that costs associated with conducting studies to eliminate uncertainty are unfeasible, according to Woodcock.

Evaluating the effectiveness of drugs remains a “huge challenge,” she said. “You can’t predict if a drug is going to work or not,” she added, and half of drugs in Phase III clinical trials fail to prove effective. There is a need for better tools, techniques and strategies to identify winners, minimize costs and reduce failures during drug development, according to Woodcock.

Many scientists at academic medical centers are experts in molecular biology, capable not only of discovering the nuts-and-bolts mechanisms of how diseases arise and progress, but also of identifying molecular targets for drug development within biochemical pathways that contribute to disease, Woodcock said. Academic scientists have developed many animal and in-vitro models for disease, in which drugs can be tested before human studies begin.

But university researchers also can make greater contributions to methods and technologies that can be used in pre-clinical studies and clinical trials, she said. For instance, academic scientists can develop biomarkers that may serve as indicators of early success or failure in clinical trials, or as a way to identify patients who may be the most likely to benefit from a new, targeted therapies.

In addition, academic scientists should be encouraged to conduct more applied as well as basic research, according to Woodcock. “We have all these great evaluation tools for reductionist science down at the molecular level, but there is a tremendous need for scholarly work on drug manufacturing and scale-up,” she said.

In some cases university scientists will be following through with drug development, rather than handing it off early to industry partners, according to Woodcock. Building on expertise related to identifying biochemical pathways that drive disease, proof of disease-fighting concepts, and how the body handles drugs, researchers at academic medical centers will increasingly take the lead in developing drugs to fight so-called “orphan” diseases that are not a priority for pharmaceutical companies, she said.

Woodcock added that physician-scientists at academic medical centers also are playing a driving role in developing and implementing new ways to conduct clinical trials, and she specifically cited the I-SPY breast-cancer clinical trials led by UCSF breast surgeon Laura Esserman, MD, MBA and colleagues. In I-SPY trials information on biomarkers gathered at earlier stages of a trial is used to more quickly identify patients who might be the most likely to benefit from specific therapies being tested.

Woodcock also envisions academic medical centers as hubs for new clinical-trials networks. These networks would have the capacity to incorporate sophisticated laboratory science into clinical trials and would include medical practices in surrounding communities and regions, so that patients would not need to travel far for promising experimental treatments, she said.

Many clinical trials fail to enroll an adequate number of patients, leading to drug-development failures. “Ninety-five percent of cancer patients are never asked to participant in a clinical trial,” Woodcock say. “Most patients are out in communities, not in the places where trials are being run.”

Woodcock previously served as the FDA’s deputy commissioner and chief medical officer. She also led CDER as director from 1994–2005. Prior to joining CDER, Woodcock oversaw approval of the first biotechnology-based treatments for multiple sclerosis and cystic fibrosis in her position as director of the Office of Therapeutics Research and Review in FDA’s Center for Biologics Evaluation and Research (CBER). Woodcock has held teaching appointments at Pennsylvania State University and at UCSF. She joined the FDA in 1986.