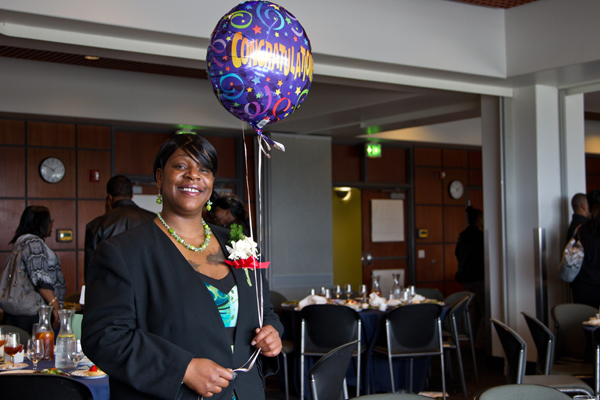 Shameka Jones poses with balloons given to her at the Aug. 31 graduation luncheon for UCSF's EXCEL program, which helps low-income individuals gain the clerical and administrative job skills needed to be competitive in the health care and life sciences field.

A good job in health care was the key to a better life for Shameka Jones, but the path to getting one hasn’t been easy.

Jones, who dropped out of high school before eventually getting her GED, was on welfare and struggling to support a young family by her early 20s. She managed to become a certified nursing assistant through a CalWORKS program and got a steady job at San Francisco General Hospital and Trauma Center, but the murder of her brother – a major motivator in her life – and the strain of raising three kids as a single mother took tolls on her professional life.

After losing her job in 2010, Jones worked odd jobs to pay the bills, searching for a way back into health care. She found the EXCEL program, a partnership between UCSF and Jewish Vocational Service (JVS) that gave her an opportunity to undergo 10 weeks of intensive computer training followed by a four-month paid internship that offered practical experience in the field.

“I knew that by being specifically in this program, I would gain self-sufficiency and have the opportunity to work in a professional setting,” said Jones, 30, who got a chance to work for UCSF’s Occupational Health Clinic.

Jones successfully completed her internship and graduated along with 17 others last week from the program that has now helped more than 160 people get the clerical and administrative job skills needed to be competitive in the health care and life sciences field since launching in 1998.

Investing in the Local Workforce

EXCEL (Excellence through Community Engagement and Learning), formerly known as the Community Outreach Internship Program, was established with the goal of developing the potential local workforce and providing underserved communities with exposure and access to university jobs. All participants are low-income, and most are parents. 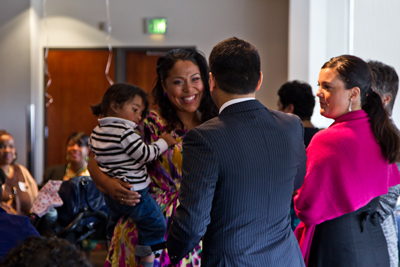 Tatiana Torres, who interned with the Office of Diversity & Outreach, holds her 21-month-old son, Isaiah Armando Silva, while accepting an award of successfully completing the EXCEL program.

The program operated successfully from 1998 to 2006, then went on hiatus as UCSF sought a new partner to provide skills training to the interns. Since partnering with JVS in 2010, the program has accelerated its reach, thanks to generous funding by the San Francisco Human Services Agency, JP Morgan Chase, Goldman Sachs, the Walter & Elise Haas Fund and The San Francisco Foundation.

“The EXCEL program incorporates the best aspects of innovative workforce development: customized training for specific jobs, a deeply committed employer partner, the integration of classroom- and workplace-based learning, and comprehensive support for the students throughout the training,” said Abby Snay, executive director of JVS.

“UCSF's investment in the EXCEL program, and to the students who participate, is just extraordinary,” Snay said. “The EXCEL program truly transforms lives and strengthens the community.”

This year, for the first time since the JVS partnership began, EXCEL was able to accept two classes of interns. The latest class of 15 began their journey in August, giving last week’s graduates a chance to meet the newbies and offer some advice for succeeding at UCSF.

That culture of helping one another was encouraged throughout the process.

“I hope one of the things you took away is the support that’s here, that when we work together, when we support one another, we can achieve so much more than when we think we have to achieve things by ourselves,” Barbara J. French, UCSF’s vice chancellor of Strategic Communications and University Relations, told the graduates during the luncheon celebrating their achievement.

Jones was excited for the chance to pass on some valuable tips: “Come to class prepared, willing to learn and just be here,” she said. “You just have to be there, you have to want this and have the passion.”

It sounded simple enough, but for Jones, that meant waking up every morning at 4:30 a.m. to get her 9-year-old daughter and 4-year-old twin sons ready for the day and making it to the office by 7:15 a.m. to meet the program’s strong attendance requirements. Her dedication paid off, and she was given increasing responsibility with front desk duties and handling medical records. 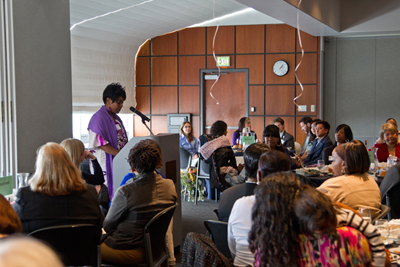 Najwa Rogers, who interned with UCSF's School of Dentistry Admissions Office, gives a speech at the EXCEL graduation.

“It really gave me the advantage to have this on my resume,” said Jones, who’s about to start testing to become certified as a medical assistant. “I know I’ll be employable.”

After completing their internships, graduates are placed into UCSF’s Interim Staffing Service, with the long-term goal of obtaining career employment with the University.

Out of the class of 18, six of last week’s graduates, including Jones and Najwa Rogers, who found the program after being unemployed for nearly a year, are continuing their jobs for at least several more months. “I truly appreciate your dedication and hope you recognize, as I do, the valuable role you play in building brighter futures,” Rogers, who interned with the School of Dentistry’s Admissions Office, told program organizers during her speech at the graduation.

The value of the program also extends to supervisors and trainers. Not only is having diversity of life experience an asset in patient care, but having the interns in the office kept the staff on its toes, said Diane Sabin, administrative director of the Osher Center for Integrative Medicine, which hosted four EXCEL interns this summer.

“They say the best way to learn is to teach, so it reinforced our own staff and practitioners’ knowledge base – just to go through some of these essential, core matters that sometimes disappear because they’re so much in the fabric of what should be happening,” she said.

Sabin joined a roomful of supporters – from family and friends, to program supervisors and alumni – to cheer on the graduates as they accepted a framed certificate and took the podium to personally thank those who helped them along the way.

Angelo Edwards, one of the interns at the Osher Center, thanked Sabin’s department and the organizers who made the program possible for him.

“We’re part of this family now. I won’t let you down,” Edwards said.