People who carry a “G” instead of an “A” at a specific spot in the sequence of their genetic code have roughly a six-fold higher risk of developing certain types of brain tumors, according to a study by researchers at the University of California, San Francisco (UCSF) and Mayo Clinic.

The study was jointly led by geneticists Margaret Wrensch, PhD, and John Wiencke, PhD, professors in the Department of Neurological Surgery at UCSF, and Robert Jenkins, MD, PhD, professor of Laboratory Medicine in the Department of Laboratory Medicine and Pathology and the Division of Laboratory Genetics at the Mayo Clinic. The findings, published in the journal Nature Genetics, could help researchers identify people at risk of developing certain subtypes of gliomas, which account for about 4,600 of the 23,000 brain cancers newly diagnosed annually in the US. This information could lead to better surveillance, diagnosis and treatment.

Based on their findings, the scientists already are starting to think about clinical tests that could tell patients with abnormal brain scans what kind of tumor they have, by simply testing their blood. 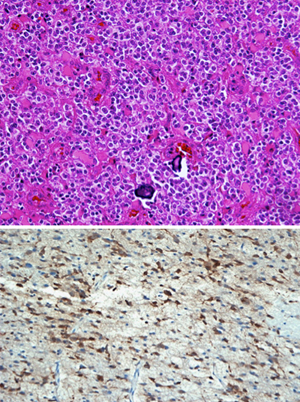 Researchers still need to understand how the specific DNA change actually causes the tumors, said Wrensch, since “this is among the first examples that a change in a non-coding portion of DNA can be so strongly associated with cancer risk.”

The study began a few years ago when researchers started hunting for regions of the genome that might be associated with glioma development. They observed that a portion of chromosome 8 contained single nucleotide polymorphisms, or “SNPs,” that were associated with brain tumors. Then, Wrensch, Wiencke, Jenkins and their colleagues used a combination of sophisticated genomic techniques to search for the SNP that was causing brain tumors to form.

They honed in on seven candidates, including the SNP called rs55705857, which confers a relative risk for glioma approaching that seen with changes in BRCA1 for breast cancer. Interestingly, this region was only found through the most laborious method used by the researchers — next generation sequencing — suggesting that experimental and mathematical shortcuts may miss such rare, highly potent gene variants, the authors say.

Wrensch and Jenkins found that having the “G,” or guanine, version of this SNP — rather than the more common “A” adenine version — was strongly associated with slower growing gliomas.

“Understanding how this variant causes people to get these less aggressive, but still lethal, tumors will be extremely important,” Wrensch said. “It may eventually lead to methods to reverse the course of these tumors or possibly to prevent their formation.”

As part of their work, the researchers compared the sequence of the gene variant throughout mammalian evolution and found that it has been conserved as far back as the platypus. Computer modeling indicated that the region may be a microRNA, a special kind of nucleic acid that controls the activity of genetic messages within cells. The modeling places the SNP within the functional part of the microRNA, suggesting that a change in genetic code from an “A” to a “G” could have significant consequences. The research team is investigating whether the microRNA actually exists, and what its functional implications might be.

“The altered microRNA might target tumor suppressor genes, it might activate a cancer gene, it might be involved in regulating the stability of the genome, or there might be something else going on altogether,” Jenkins said. “One of the big challenges of the current genomic era is to assign functions to all these new gene variants.”

Study funding at UCSF, was supported by the National Institutes of Health, the National Brain Tumor Foundation, the UCSF Lewis Chair in Brain Tumor Research, the Robert Magnin Newman Endowment in Neuro-oncology, and by donations from families and friends of John Berardi, Helen Glaser, Elvera Olsen, Raymond E. Cooper and William Martinusen.

For more information about gliomas and their treatment: