A novel virus has been identified as the possible cause of a common but mysterious disease that kills a significant number of pet snakes all over the world, thanks to research led by scientists at the University of California, San Francisco (UCSF) — and three snakes named Juliet, Balthazar and Larry.

The virus, previously not thought to infect snakes at all, appears to cause “inclusion body disease.” Long the bane of zoo officials and exotic pet owners, the deadly illness spreads among boas and pythons in captivity, causing micro clumps of clustered proteins to form inside the snake, leading to bacterial infections, neurological problems, anorexia and withering, leading to death.

The new work, described this week in the American Society for Microbiology’s new open-access journal mBio, paves the way toward developing diagnostics and treatments, which may make it possible to eradicate the disease from snake collections worldwide.

“It’s a devastating disease when it gets into a collection, zoo or aquarium because it’s essentially fatal every time,” said Joe DeRisi, PhD, the senior author of the study, a Howard Hughes Medical Institute investigator (HHMI) and vice chair of the Department of Biochemistry and Biophysics at UCSF.

Surprisingly, he said, the cause of the illness appears to be a completely new set of viruses of a type known as an arenavirus. The discovery came as a complete a shock to the team of scientists because, while arenaviruses are common in rodents and cause extremely nasty infections in other mammals, nobody knew they could infect reptiles.

“Now we have found that they infect snakes, as well,” said Mark Stenglein, PhD, a postdoctoral fellow at UCSF who is the first author on the paper.

Stenglein, DeRisi and their colleagues isolated at least two strains of the arenaviruses from half a dozen snakes afflicted with inclusion body disease. They could find no traces of the same viruses in snakes that were free from disease.

Arenaviruses infect mostly rodents but occasionally people, and can cause fatal hemorrhagic diseases like Lassa fever, which kills thousands of people every year in Africa. There is no evidence, however, that a snake has ever transmitted an arenavirus infection to a person despite the fact that snake owners and veterinarians handle infected snakes all the time, said DeRisi.

Three Snakes That Shook the World

For years, many experts have hypothesized that a virus or some other infectious pathogen might cause inclusion body disease because of evidence that it spreads easily from snake to snake. No definitive cause has been identified until now, and the discovery may never have occurred if not for a random sequence of events, including cases of inclusion body disease in an aquarium collection, a friendly DNA sequencing competition among scientists, a postdoctoral researcher who was looking for a project, and a snake owner worried about her favorite pet. 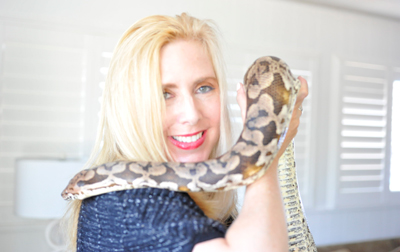 Taryn Hook poses with her pet snake, Larry, whose condition spurred Hook to ask Joe DeRisi, PhD, a Howard Hughes Medical Investigator and vice chair of the UCSF Department of Biochemistry and Biophysics, to investigate the cause of inclusion body disease.

The story began with a snake named Larry, and his owner, Taryn Hook of San Jose, California. Before Larry, Hook had lost two snakes to inclusion body disease, and, in early 2009, she became convinced Larry had it as well. He was developing bacterial infections similar to what Hook had seen with her two other snakes. Knowing there was no treatment or cure, she was desperate to find anyone who might save her snake.

Hook took Larry to see the exotic pet veterinarian Chris Sanders, DVM, owner of the nearby Wildwood Veterinary Hospital.  Sanders had just attended a conference at which he had heard DeRisi talking about his Virochip DNA microarray technology and its ability to identify viruses, fungi and other pathogens — including at least one exotic pet disease, a mysterious parrot virus — when no other gene probing technology could. The parrot virus was discovered by DeRisi and Don Ganem, MD, at the time an HHMI investigator and professor of microbiology and medicine at UCSF, in 2008.

Could DeRisi help save Larry the snake as well? Sanders suggested to Hook she had nothing to lose by asking.

DeRisi was in his office one morning in early 2009 when he spied a hand-written letter in his stack of daily mail. Inside was a plea from Hook describing Larry’s illness.  She had heard he had found the cause of a mysterious parrot disease. Would he do for snakes what he did for parrots? She enclosed a picture of herself with Larry.

Having never heard of the disease, DeRisi set the letter aside and it was lost under a pile of paper. Only months later, while cleaning his office, did he stumbled across it again. He was about to toss it away, but in scanning the letter again he noticed Hook mentioned the local exotic pet veterinarian Sanders. So he called, they spoke, and DeRisi decided to take on the project.

“It satisfied all the criteria as an interesting disease,” DeRisi said. But first he had to find samples to test from infected snakes.

Around the same time, inclusion body disease was diagnosed in a snake at the Steinhart Aquarium in the California Academy of Sciences in San Francisco. Also discovered were snake mites, which are believed to be a possible vector for passing the disease from snake to snake.

Academy veterinarian Freeland Dunker decided to test all of the boas exposed to the infected snake for the disease — a complicated procedure requiring a surgical biopsy of the liver. He discovered a few more were infected, and all of them had to be euthanized to prevent any spread of the disease.  Dunker asked his pathologist, Drury Reavill DVM if she knew of any current research being done on inclusion body disease for which tissues from the euthanized snakes could be used. As it turned out, Reavill had already been in touch with DeRisi’s group and knew they were looking for samples.

The effort to find the virus went into overdrive after Stenglein joined the DeRisi laboratory as a postdoctoral fellow and took on the project. But before he and DeRisi could find traces of the virus they needed to know the sequence of the boa constrictor genome so they could distinguish snake DNA sequences from viral sequences in the diseased animals. The problem was that there were no snake genomes available.

Thus, their first step was to sequence the entire boa constrictor genome, and they had to start with a snake that they were sure was free of inclusion body disease. At the Academy, Dunker helped in this effort by collecting blood from a boa constrictor named Balthazar, an education animal which was housed separately, had no contact with the rest of the boa snake collection and tested negative for the inclusion body disease.

Substantial help in the sequencing effort came from scientists participating in a friendly competition called the Assemblathon 2, which was sponsored by UC Santa Cruz and UC Davis. Balthazar’s DNA was sequenced and a number of groups around the country competed to build (assemble) the most complete genome sequence possible using the raw data.

Characterizing Balthazar’s genome paved the way for finding the arenavirus in the midst of millions of other sequences of the snakes’ DNA. This “needle in the haystack” problem was solved using custom software written in the DeRisi lab, and made available for free on his website.

This is where the shock came.

The team found two arenavirus strains in the snakes — a surprise in itself; but in addition, they observed that the viruses did not look like your ordinary arenaviruses. They looked like distant relatives of other arenaviruses but had protein coats that were more similar to those of Ebola viruses. Like arenaviruses, Ebola virus can cause fatal hemorrhagic fever when transmitted to humans.  Neither of those viruses has ever been known to infect reptiles, and although it had been postulated that they share a common ancestor, no such virus linking them had ever been discovered.

Once the virus was computationally identified, the team had to find a way to grow the virus so that it could be studied further. Because the virus infects boa constrictors, the ideal way to grow it, the team reasoned, would be to infect boa constrictor cells, but no such cell line existed. So DeRisi and Stenglein turned to a third snake, named Juliet.

Juliet was a red tailed boa owned by Chris Sanders, who’d had her since his days as a young veterinary student. She was about 20 years old when Balthazar’s genome was being assembled and was dying of lymphoma.  When she ultimately succumbed to the cancer, Sanders harvested her kidneys and the DeRisi laboratory was able to use them to make a boa constrictor cell line. 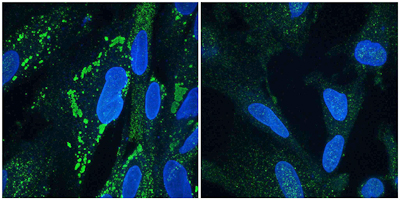 On the left are kidney cells of a red-tailed boa constrictor infected with inclusion body disease, which causes micro clumps of clustered proteins to form inside the snake, leading to bacterial infections, neurological problems, anorexia and withering, leading to death. On the right are uninfected kidney cells.

The scientists took virus from diseased snakes, added it to Juliet’s kidney cells growing in petri dishes and showed that the snakes accumulated exactly the same “clumps” of proteins as had been observed in the sick snakes from the Academy. Antibodies raised against the virus showed that these clumps were formed from arenavirus protein, further strengthening the association of this new virus and the deadly disease.

In solving this longstanding veterinary mystery and setting the stage for treatments, vaccines, and perhaps even eradication of this disease, the scientists also discovered an unexpected new branch of virus biology: The viruses they found appear to be a combination of arenaviruses and filoviruses, neither of which has been known to infect reptiles.

In addition to the authors from UCSF, authors of this study are affiliated with Wildwood Veterinary Hospitals in Portola Valley, CA; Novartis Institutes for Biomedical Research, Zoo/Exotic Pathology Services in Sacramento, CA; and the California Academy of Sciences in San Francisco.

This work was supported by the Howard Hughes Medical Institute and the National Institutes of Health.