The negative impact of stress on health is widely documented. So is the importance of reducing stress in one’s life. But a new animal study is the first to model stress reduction and its biological effects in rodents as they are placed in various caging environments, according to a recent study led by UCSF researchers.

An international team from the United States, France, Germany and Austria conducted a study on 40 male mice from February to July 2011. The research, published in April as the cover story of Molecular Medicine, focused on four specific environments that varied in size, comfort and the ability of the mice to exercise. 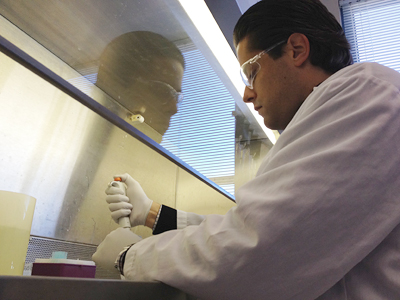 “Our intention was to develop a mouse model that we can use reproducibly to model the biological changes that occur when moving from a state of stress to a state of less stress, or stress reduction,” said first author Blake Gurfein, PhD, a postdoctoral research fellow with the UCSF Osher Center for Integrative Medicine. “We wanted to explore neuroendocrine changes. What happens when you reduce stress hormone levels? What happens when you reduce autonomic nervous system activity? That was the basis of our hypothesis.”

One of the key findings is that “calm” animals exhibited a reduction in stress hormone production throughout the course of the experiment. They also exhibited increased body mass, which is usually an indicator of robust health and wellness in rodent studies.

“If you look at infectious disease studies involving mice, for example, reductions in body mass usually are categorized as an index of morbidity,” Gurfein said. “Animals that weigh more usually have better prognoses.”

Researchers were surprised how quickly they saw significant biological changes. Rodents in the “calm” and “calm exercise” groups gained body mass and reduced production of stress hormones within one week.

“One of the variables in our study is time, and we were thinking that it would be more of a gradual change,” Gurfein said. “The effects of the change in environment became evident pretty quickly.” 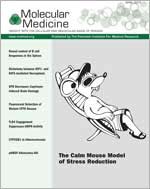 The team studied male mice, so do not know if female mice would react to the different environments in a similar way. Researchers hope to expand on this study and see if their results have similar outcomes in human studies.

The team said it may be too early to establish a link between this animal study and how humans respond to stress.

“If you’re conducting a large-scale clinical study, there usually is a mix of men and women,” Gurfein said. “And we have flexibility to design this study to look at sex specific effects.” Researchers hope to continue refining the study model and start applying it to questions such as how stress reduction affects the immune system. They also hope to examine how stress reduction might influence pathways of neurodegeneration using models of Alzheimer’s Disease and Parkinson’s Disease.

“There definitely is excitement as far as the future direction of this study,” Gurfein said. “We can closely look at the effect stress has on immune function, brain function, and metabolism, which can have far reaching implications on how we deal with stress.”

Co-authors are Andrew Stamm, of the Harvard Medical School; Peter Bacchetti of the UCSF Department of Epidemiology and Biostatistics; Mary Dallman, of the UCSF Department of Physiology; Nachiket Nadkarni and Nicolas Darcel of Chaire ANCA, Food Nutrition and Eating Behavior and Nutrition Physiology and Ingestive Behavior in Paris, France; Chadi Touma, of the Max Planck Institute of Psychiatry in Munich, Germany; Rupert Plame, of the University of Veterinary Medicine in Vienna, Austria; Charles Pozzo Di Borgo and Gilles Fomentin of the INRA, Nutrition Physiology and Ingestive Behavior in Paris, France; Jan Pieter Konsman of the Bordeaux University’s Phychonueorimmunology, Nutrition, and Genetics in Bordeaux, France; Michael Acree and Frederick Hecht of the UCSF Osher Center for Integrative Medicine; and Jeffrey Milush, Rachel Lown-Hecht, Mary Premenko-Lanier, and Douglas Nixon of the UCSF Division of Experimental Medicine.

This study was supported by the Bowes Fund for Innovation Research in Integrative Medicine; by grants T32 AT003997, K01 AT006153-01A1 and P01 AT005013 from the National Center for Complementary and Alternative Medicine; by grant P30 AR058899 from the National Institute of Arthritis, Musculoskeletal, and Skin Diseases; by Chaire ANCA; and by the Harvey V. Berneking Living Trust.